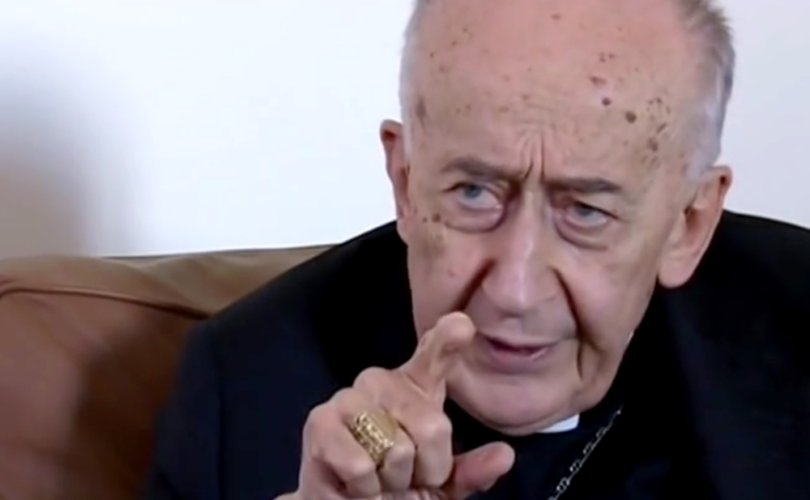 February 27, 2020 (L'Espresso) — The explosion of individual desires transformed into rights for all is a matter of daily news, in the West and beyond. With no limits anymore. It affects birth and death, technology and the environment, politics and migration, in short, the very nature of man. But is it the triumph of freedom or dictatorship, at the expense of the weakest? And what then is the other freedom, the one that feeds on truth and cannot exist without it?

Cardinal Camillo Ruini, 89, a lifelong philosopher and pastor, discusses this with Gaetano Quagliariello, senator, professor of contemporary history at LUISS in Rome and president of the Magna Carta Foundation, in a lucid and impassioned book, on sale in Italy since February 20:

> C. Ruini, G. Quagliariello, “Another freedom. Against the new prophets of ‘heaven on earth’,” Rubbettino Editore, 2020.

The following offers a taste of it. They are three passages in which Cardinal Ruini addresses the issue of voluntary abortion. At first as a matter of fact, then analyzing it in the light of reason alone, and finally with special attention to the teaching of the Church, culminating in the “infallible and irreformable” pronouncement of John Paul II in the encyclical “Evangelium Vitae,” an encyclical that “seems written today,” so much have its predictions come true, but which too many — the cardinal notes — seem to have set aside.

ABORTION, MIRROR OF THE CRISIS OF THE WEST

(from: “Another freedom. Against the new prophets of ‘heaven on earth’”)

1. THE COURAGE TO CALL IT “MURDER”

In cases concerning the beginning of life, the claim to individual freedom is out of place, because one decides not about oneself but about another, the unborn child, unless one thinks that the unborn child is simply part of the mother's body: an unsustainable absurdity because he has his own “dna,” his own development and interacts with the mother, as is increasingly clear.

The alternative is to think that the unborn child is not a human being but can become one only later (after birth, or after the formation of the nervous system, or after implantation in the uterus…). In reality this is always a matter of the same being that evolves, as he does even after birth. His continuity is verified as his distinction from the mother. He is therefore never an “animalcule” of a non-human species. To suppress him is always, from conception or from the fertilization of the egg onwards, to suppress a human being. Therefore the encyclical “Evangelium Vitae” of John Paul II does not hesitate to speak of murder and warns against the manipulations of language that hide reality. Instead he asks to have the courage to call things by their name: “voluntary abortion” and not the aseptic “termination of pregnancy.”

2. NO TO ABORTION IN THE LIGHT OF REASON ALONE

Is there a connection between the attack on life and the crisis of the West and of Western humanism? I believe so, and to trace the common trait I refer to the encyclical “Evangelium Vitae.” … It was written twenty-five years ago but in essence it seems written today, with the only difference being that today the situation has worsened and the risks reported at the time have largely been realized.

In the first of its four chapters “Evangelium Vitae” highlights the current threats to human life, which we all know. However, it does not limit itself to describing the situation but examines its causes.

The basic justification for the attacks on human life is the claim to individual freedom: consider the slogan of the ’70s, “My body, my choice.” Today, still on the basis of individual freedom, the right to a living will and from there to assisted suicide is affirmed, situations in which I not only decide but bind others, including doctors, to my free choice. …

But there is a profound contradiction at the basis of the unease and unhappiness of our age, and therefore of its tendency to escape from ourselves and from reality. On the one hand, there is the great assertion of the freedom and rights of the subject, to the point of setting up this freedom as the absolute criterion for our choices. On the other hand, the subject is conceived of simply as a fruit of evolution, a “speck of nature” (“Gaudium et Spes,” 14), which as such cannot be really and inwardly free and responsible and cannot claim any centrality or any right in the face of the nature that ignores him and does not care for him. This contradiction explodes dramatically in cases such as the death of a young person or a disabling illness, which appear to be meaningless and completely unacceptable.

“Evangelium Vitae” takes a rather demanding step forward to get out of the contradiction. In order that the assertion of our freedom may truly make sense, it is not necessary that God not exist — as most of modern thought has believed — but on the contrary that God exist.

In fact, only if at the origin of our existence there is not only an unconscious nature but also and above all a creative freedom can we be really and inwardly free. This is a great intuition of Kant, taken up by Schelling, which the encyclical proposes in its own perspective. … When we reflect on what makes it possible for a human life to be truly free and truly have a meaning, we realize that we cannot do without God, and not just any God but God our creator, author and foundation of our life and our freedom.

Therefore the claim that we are the masters of life and death, ours or even others’, is wrong for several reasons. First of all because freedom is not something isolated and absolute, but can only exist in relation to reality, that is, to others and to the environment in which we live. Secondly, because our life and our very freedom come from God and are intrinsically in relationship with him, they are linked to him and ultimately depend on him.

It is therefore unfounded to treat them as something that is ours alone, for which we need answer to no one: we must answer for them before the reality that we are, before the society to which we belong and ultimately before God our creator.

In public discussion we never talk about this relationship with God in order to avoid the accusation of defending life for confessional reasons, and it is right to do so. On the other hand, for the sake of thoroughness it seems appropriate to mention this aspect, which sheds light on the ultimate roots of our freedom. Those who defend life and are not believers can, of course, disagree: the defense of life is certainly possible even regardless of the relationship with God.

3. A “DO NOT KILL” THAT APPLIES EVEN MORE TO CATHOLICS

The teaching of “Evangelium Vitae” must be re-proposed with rational arguments, as recommended by the encyclical itself, which is addressed to all and asks everyone for attention and sympathy in the cause of life, without fear of unpopularity and without stooping to compromises. But the same encyclical is addressed first of all to Catholics, starting with the bishops, and proposes a truth that applies to all but applies in a special capacity to believers.

In publishing it, John Paul II intended to perform an act of the highest doctrinal value, strictly binding for believers. This is in fact the document of his pontificate in which he most brings to bear his magisterium, stating that the commandment “Do not kill” has an absolute value when it refers to innocent people. This clarification, “innocent,” is important in relation to the problem of legitimate defense, which can lawfully lead to the killing of the unjust aggressor, and also for the question of the death penalty, which the Church today excludes because human coexistence can be defended without resorting to it, but has not always ruled out in the past.

According to “Evangelium Vitae” this “absolute inviolability of innocent human life is a moral truth clearly taught by Sacred Scripture, constantly upheld in the Church's Tradition and consistently proposed by her Magisterium.” It is the fruit of the sense of faith, prompted and guided by the Holy Spirit, who “safeguards the People of God from error when ‘it shows universal agreement in matters of faith and morals’.” “Therefore, by the authority which Christ conferred upon Peter and his Successors” — John Paul II writes — “and in communion with the Bishops of the Catholic Church, I confirm that the direct and voluntary killing of an innocent human being is always gravely immoral” (no. 57). This solemn formula expresses an infallible and irreformable pronouncement. … The pope uses the word “I confirm” — and not “I declare” — to underline that this is a matter of a truth already belonging to the patrimony of the Catholic faith. …

Unfortunately many Catholics, even practicing, do not seem aware of all this: in fact they support and even put into practice regarding abortion positions incompatible with the faith they profess. …

Interesting is what we can qualify as the intra-ecclesial implication of this statement: in the encyclical “Veritatis Splendor” of two years earlier, the pope had affirmed that there are truths of the moral order contained in divine revelation, and that the magisterium of the Church can define them infallibly. Various Catholic theologians, of the contrary opinion, had objected that in fact there are no moral truths on which the magisterium has intervened infallibly. The non-reformable position of the encyclical “Evangelium Vitae” regarding the inviolability of innocent human life and in particular abortion responds in a very concrete manner to an objection of this kind.

This article originally appeared at L'Espresso. It is published with permission from Sandro Magister.