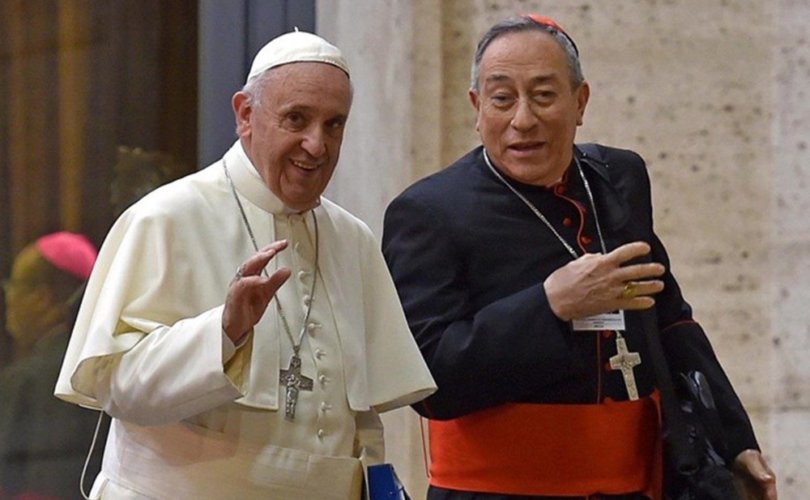 Editor’s note: The article below by Prof. Claudio Pierantoni, professor of Medieval Philosophy in the Philosophy Faculty of the University of Chile (Santiago), was originally published in Italian by Corrispondenza Romana. It has been translated here into English by Diane Montagna, Rome correspondent for LifeSiteNews.

ROME, September 26, 2018 (LifeSiteNews) — Among the variety of statements that have followed since the “bomb” of Archbishop Viganò’s testimony exploded last month, we wish to report a statement made by Cardinal Rodriguez Maradiaga, in an interview on September 12, 2018.

The interview begins by recalling that Rodríguez Maradiaga is a “friend and close collaborator of the Pope,” and that the Viganò dossier “converts him into the protector of the abuser, Cardinal McCarrick.”

The first question of the interview is: “The Viganò dossier accuses the Pope of covering up Cardinal McCarrick’s homosexual relations with seminarians and ends by asking Francis to resign. What do you think about this?”

Rodríguez Maradiaga replies: “To make something of a private order into an atomic bomb that explodes worldwide, and whose shards harm the faith of many people, does not seem proper to me. I think that a matter of an administrative nature should be dealt with using more serene and objective criteria, not with a negative attack of very bitter expressions. I believe that the Bishop Viganò whom I have known is not the same person who writes and says such things.”

In reflecting just a little on these few lines, one finds a great deal of more important information than appears at first glance. First of all, there is an implicit but very clear admission of the truth of the facts stated by Viganò. Any dispassionate reader who has read Viganò’s document can hardly doubt what it says: on the one hand, because of the privileged position he held as Nuncio; and on the other, because of the number of high-ranking witnesses, both in the Roman Curia and in the American episcopate, who are directly named by him as accomplices, and who could easily deny it if what he said were false.

The main party concerned, i.e. the Pope, then eloquently confirmed by his perfect silence that Viganò is telling the truth about him. (We will leave for another occasion any comments on the Pope’s self-celebration of his own silence in a homily on the Gospel of Luke).

We have also not received any substantial denial from Benedict XVI regarding the sanctions he imposed on McCarrick, except for the clarification that they were “private” sanctions rather than “canonical” in the true sense of the word (otherwise they would have been public).

But the fact is that there were sanctions; that McCarrick, with the complicity of American bishops and Curial prelates, didn’t respect them much; and that they were then mysteriously completely set aside under Francis. The response of Rodríguez Maradiaga now provides further and definitive confirmation that these were facts well known to the Pope and to his “circle of friends,” of which he [Maradiaga] is a prominent member.

But even more instructive is the way in which Rodríguez Maradiaga describes McCarrick’s conduct with these two expressions: “something of a private order,” and “an administrative matter.”

According to the Honduran Cardinal (a prominent member of the C9 and one of the leaders, we recall, of Francis’ much anticipated program of reform), McCarrick’s behavior, which includes soliciting and sodomizing entire generations of seminarians through the continued and notorious abuse of his power as Bishop and Cardinal of the Catholic Church, as well as the continuing sacrilegious celebration of Holy Mass, would be “something of a private order,” and “an administrative matter.”

Without a doubt, this is enough to leave one a bit perplexed. Behavior that has traumatized dozens of young men, destroyed vocations, scandalized thousands of faithful to the point of becoming an “open secret,” yet was protected by the highest levels of the Roman Curia and by the Pope himself, is, for the ineffable Central American Cardinal, “something of a private order,” and “an administrative matter.”

Here it would not even be necessary to disturb moral theology (it seems that Rodríguez Maradiaga is a scholar in this discipline) to explain to the Cardinal that any serious sin, even the most secret, is certainly never, for the Church, a purely “private” matter, and even less so a mere “administrative matter,” but is always an infection that spreads and contaminates the whole ecclesial body.

But there is no need to recall this since, in the Cardinal’s speech, every reference to something called “sin” is completely absent: it is simply “something private.”

Yet giving the most charitable interpretation possible to Rodríguez Maradiaga’s incredible words, we might also concede that, if it were a matter of a specific and limited affair (let’s suppose, for example, a secret relationship with a single seminarian), it could have been corrected in a severe and decisive yet discreet manner, without needing to inform the whole Catholic world and indeed the entire world about it.

Unfortunately, however, our Cardinal forgets all too easily that the Viganò memorandum stems precisely from the Nuncio’s painful observation over several decades — from his privileged vantage point — of the continuous growth and branching out of these abuses. Having continually hoped and trusted that someone in the hierarchy would react, that finally sanctions would be enforced and the course be corrected, he [Viganò] had to finally admit the obvious, that if someone with true knowledge of the facts does not speak out publicly, nothing will ever change.

And the situation reached its climax once the Nuncio was certain, from his meetings with Pope Francis, that not only was Bergoglio aware of McCarrick’s evil deeds, but that he had in fact lifted all the sanctions and even turned him into one of his advisers in the nomination of American bishops. And this was all happening against the backdrop of the Pope himself not only accepting but encouraging and promoting the pro-gay agenda within the Church, from the Synods on the family to the recent meeting in Ireland.

And here we come to the next point we wish to stress. When Cardinal Maradiaga reduces sodomy (and the abuse of power for this purpose), to a mere “private affair” and “administrative matter,” he is clearly revealing to us what his own moral standard is on the subject.

How many steps on the scale of moral depravity must a man of the Church have already descended, to reduce sexual corruption, through abuse of power, of generations of seminarians, to a “private matter” to be resolved “administratively”? Certainly he knows that, on paper, canonical laws still exist which prohibit certain behaviors, and that these, in addition to being grave sins, are also, according to these laws, true and proper crimes.

But his words indicate that these norms ought to be considered, if not a dead letter, then certainly a mere “administrative matter” that “should be dealt with using more serene and objective criteria.” As we see, the picture presented by Viganò — which is horribly disgusting for any Catholic who has kept a minimum of modesty and the sensus fidei — is not at all denied by our Honduran Cardinal. For him it is only an “administrative” matter that ought to be evaluated with “serene and objective” criteria (after all, in the small confines of his native Honduras, scandals — both sexual and financial — which he “serenely evaluated” and adequately covered up, are part and parcel of ordinary administration).

Viganò therefore errs in wanting to describe this situation “with a negative attack of very bitter expressions.” The Nuncio errs in being bitter about such trifles; this clearly happens to him because he is behind the times. He is to blame for “being conservative.” This supreme insult has been the refrain of all those who, unable to deny the facts, have sought to defend the Pope by minimizing the situation. For the champions of the new mercy, to be conservative is, in fact, the most rigorously unforgivable sin.

The former Nuncio is no longer “the Viganò I once knew,” says Rodríguez Maradiaga. In other words, he is not the proper diplomat who (obviously for the duties of his office) kept silent about what he saw — someone, it seems, whom the Cardinal thought should approve of and smile at everything.

Yet, while demonstrating by these words the truly striking hardening of his own moral sense, Cardinal Rodríguez Maradiaga — consummate politician that he is — is well aware that he could never afford to make such an evaluation were he not protected under the safe umbrella of his Boss, who implicitly but unequivocally promoted himself from being the simple Vicar of Christ to the absolute Leader of the Church.

This brings us to the final point we wish to underscore: namely, the fact that in his testimony Viganò describes the cover-up of these crimes as a “conspiracy of silence, not so dissimilar from the one that prevails in the mafia.”

In fact, this cover-up has an important point in common with the mafia’s conspiracy of silence: it does not conceal crimes simply out of fear that they will be discovered. Instead, it covers them up because, in reality, it obeys a different system of values, one that does not correspond to the law in force in the community in which it operates (in this case, the Catholic Church).

In other words, the gay lobby covers up these crimes because it justifies them in the name of a different morality, which a certain elite of illuminati who are in power substitute for Scripture and the Tradition of the Church. And this, without any doubt, is the most serious and literally diabolical form of clerical abuse.

Now, it should be noted that this — i.e., that it is the Pope himself who is trampling on Scripture and Catholic Tradition — is no longer being said by the usual traditionalists, nor by the usual ultra-conservatives (the so-called “rigorists” who are so anathematized), nor even by the much more numerous moderate conservatives who have gradually become disillusioned with him.

This is now openly being said by his own collaborators, as is evident from the recent words of one of them: “Pope Francis breaks Catholic traditions whenever he wants, because he is ‘free from disorderly attachments.’ Our Church has indeed entered a new phase: with the advent of this first Jesuit Pope, it is openly ruled by an individual rather than by the authority of Scripture alone or Scripture and Tradition.” (Quoted in Zenit, which then removed – but did not deny – the incredible statement).

These are the words of Fr. Thomas Rosica. They were published on July 31, 2018, in a meditation for the feast of St. Ignatius of Loyola in which the author wanted to illustrate “the Ignatian qualities of the Petrine ministry of Pope Francis.” Published less than one month before the Viganò dossier, they quite unintentionally provided an excellent advance commentary on the memorandum of the former Nuncio, by perfectly bringing to light both the doctrinal atmosphere of this pontificate and the utterances of other “friends” of the circle of enlightened ones.

These words certainly speak for themselves and need no commentary. On their own, they are enough to make us see starkly — as if momentarily pulling back the thin curtain of rhetorical and media mystification – the true and sinister nature of this pontificate. However, even amid such a desolate landscape, we hope and believe that the courage of one man and his testimony will be a turning point that cannot be forgotten and, with God’s help, will begin to breach the wall of corruption and the conspiracy of silence.