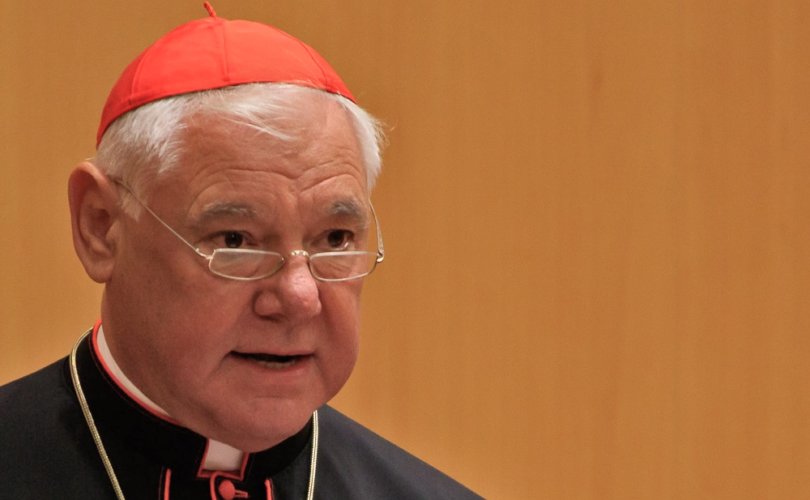 November 1, 2019 (LifeSiteNews) – At the recent “Faithful Echo” conference for priests held in Denver, Colorado, Cardinal Gerhard Ludwig Müller, former Prefect of the Congregation for the Doctrine of the Faith, issued his strongest denunciation to date of the pagan and syncretistic “Pachamama” cult activities that took place in Rome during the recent Amazon Synod of Bishops.

His Eminence's remarks came in an October 30 homily that clearly came straight from his heart – preached extemporaneously without a written text or notes at St. Thomas More church in the Denver suburb of Englewood. Cardinal Raymond Leo Burke, another conference speaker, concelebrated this Mass along with the other 60 or so priests, including myself, who participated in the conference. The conference was hosted jointly by Catholic Action for Faith and Family and the California-based Napa Institute. Later, during the final address of the conference, Cardinal Burke, speaking on the priceless spiritual value of priestly celibacy, expressed his appreciation for Cardinal Müller’s homily earlier that morning.

Cardinal Müller began by criticizing the Vatican's lukewarm response to the recent article by Eugenio Scalfari in the secularist Roman daily La Repubblica, in which the paper's 94-year-old atheist editor claimed that Pope Francis had told him in conversation that Jesus, during His time on earth, was just a great man and not the Son of God. The Vatican eventually issued a rebuttal of Scalfari's shocking claim, saying that Pope Francis never said this and firmly professed the Church's faith in the divinity of Christ. But Müller, recalling the first Pope’s immortal words to our Lord – “Thou art the Christ, the Son of the living God” – said that in this situation we should have heard that profession of faith coming immediately and directly from the lips of Peter’s successor himself, not just a Vatican press officer.

Müller then went on to condemn sharply the recent occurrence of pagan and syncretistic cult activities centered on the statuettes of Pachamama (an “Earth Mother” deity worshipped by some indigenous Amazonians). These rituals took place in the Vatican gardens in the presence of Pope Francis and other Vatican dignitaries, and later, during the synod, in the Roman church of Santa Maria in Traspontina. His Eminence asserted that it was a grave abuse that such animistic rites were permitted in these places, and applied to them the thundering biblical denunciation of pagan gods as being in reality demons (cf. Dt. 32:17; Ps. 95:5, 10, 105:37; I Cor. 10:20). The cardinal emphasized that the one Spouse of the Church is Christ, her Bridegroom, and that she does not look to alien deities or spirits for further enlightenment.

Cardinal Müller added that cultic activities such as the recent Pachamama rituals had “nothing to do with authentic inculturation” of the Gospel. For they represent a regression to pagan myths instead of purifying and elevating the traditional indigenous culture in the light of Christ's message. Müller recalled that as Christianity gradually became embedded into the ancient Greek and Roman cultures, the Church did not attempt to continue or revive any worship of the male and female deities of the classical pantheon, or to somehow mix these into Catholic worship. Rather, he said, referring to Pope St. John Paul II's encyclical Fides et Ratio (“Faith and Reason”), the Church took the best elements of these cultures – especially the profound insights of human reason discerned by great philosophers such as Plato and Aristotle – and used them to explain and promote more effectively God's supreme revelation in Christ.

Cardinal Müller concluded his powerful homily by emphasizing that the central pillar of every culture that is authentically formed by the Gospel is not the assimilation of humans into an exaggerated “interconnectedness” with animals, plants, rivers, and the earth, but rather, a recognition of the unique dignity of the human person as made in the image of God, and raised by Christ’s Incarnation and Redeeming sacrifice to the supernatural dignity of God’s adopted sons and daughters.