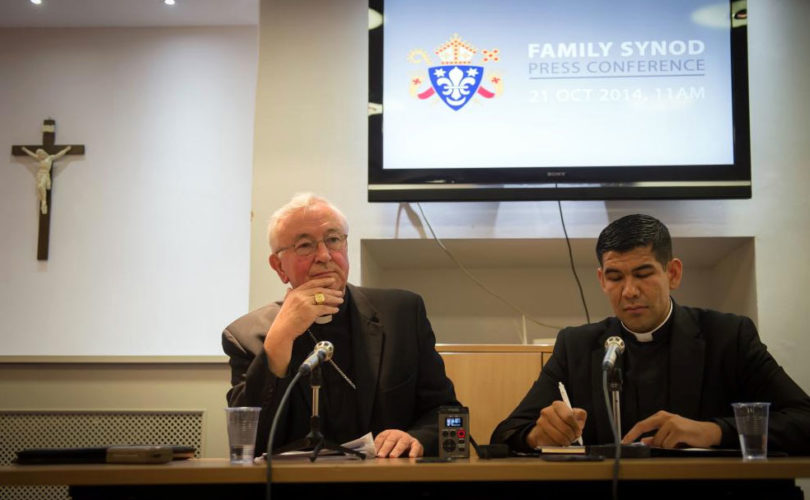 Cardinal Nichols and the Spanish language rep for the press office at the Synod during the Cardinal's press conference on the Synod.

March 25, 2015 (SPUC) – I am deeply disturbed by Cardinal Nichols' criticism of the 461 brave priests who signed a letter upholding the unchangeable teachings of the Catholic Church on marriage and Holy Communion.

In the letter, which was published in the Catholic Herald yesterday, priests from all over England and Wales pledged to remain faithful to Catholic teaching and to offer true pastoral care to all those who find themselves in difficult situations.

A statement made by Cardinal Nichols spokesman said:

“Every priest in England and Wales has been asked to reflect on the Synod discussion. It is my understanding that this has been taken up in every diocese, and that channels of communication have been established.”

“The pastoral experience and concern of all priests in these matters are of great importance and are welcomed by the Bishops. Pope Francis has asked for a period of spiritual discernment. This dialogue, between a priest and his bishop, is not best conducted through the press.”

I find this statement astonishing for a number of reasons.

Firstly, Cardinal Nichols has himself used the press to indicate sympathy for views being promoted by the “radical elements” (to use Cardinal Pell's phrase) who want to dismantle Catholic teaching on marriage and the family.

I drew attention yesterday to the press conference at which Cardinal Nichols' undermined Catholic teaching on the reception of Holy Communion by the divorced and “remarried”.

The Cardinal also used the press to express his disappointment that the final report of the synod did not include controversial phrases originally placed in the notorious interim report. He told BBC Radio 4’s Sunday programme:

“I didn’t think it went far enough, there were three key words as far as I was concerned … ‘respect’, ‘welcome’ and ‘value’. I was looking for those words and they weren’t there and so I didn’t think that was a good paragraph.”

“I didn’t think it was a good text because it didn’t include those words strongly enough so I wasn’t satisfied with it.”

Secondly, it is hardly surprising that priests faithful to Catholic teaching would lack confidence in the “channels of communication” that are claimed to “have been established.” I also mentioned yesterday that the official document produced by Bishops' Conference of England and Wales for clergy seemed nothing other than an instrument for intimidating priests who wish to remain faithful to the Church's traditional doctrine and discipline.

Is it any surprise that these brave priests would wish to speak directly to the Catholic faithful rather than trust “channels of communication” established by the same people responsible for this truly disgraceful document?

Indeed, in their press statement an anonymous priest was quoted who alleged that priests involved in the project had been intimidated by “senior churchmen.”

Thirdly, and perhaps most importantly, how can any Catholic bishop object to priests using the media to express their loyalty to the teaching of Christ and their desire to give true pastoral care to all who need it?