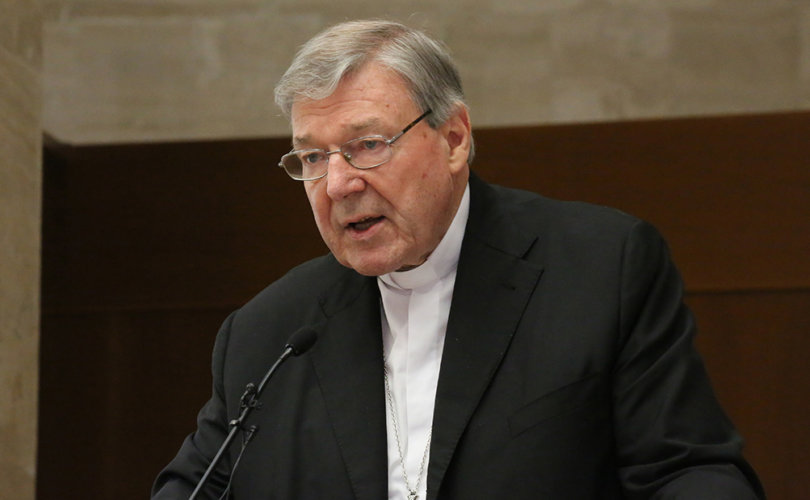 August 30, 2019 (CatholicCulture.org)  —  The conviction of Cardinal George Pell on sex-abuse charges, despite the complete absence of evidence against him, was a shock and a black mark against the Australian justice system. The decision by an appeals court to uphold that verdict compounds the problem and the disgrace. The cardinal will appeal to Australia's highest court. And in that appeal, Australian society will be on trial.

The prosecution of Cardinal Pell threatens to become Australia's version of the Dreyfus Affair, the disgraceful conviction that troubled the French political world for more than a decade around the turn of the 20th century. Captain Albert Dreyfus, accused and twice convicted of espionage, was a convenient target: unpopular because he was Jewish. When evidence emerged showing that he was not guilty, powerful military officers concealed that evidence and falsified evidence against him. The French public was howling for a conviction, and the ruling class decided that it was better to betray an innocent man than to admit an injustice.

In Australia today, the government — specifically the justice system — is now also heavily invested in the conviction of Cardinal Pell. To admit an error would be to admit an unreasonable verdict, brought about by an unreasonable prosecution, and now buttressed by an unreasonable appeals-court decision. To say that Cardinal Pell is not guilty is to imply that the judicial system is guilty in its treatment of his case. Will the country's top court have the courage to reach that verdict?

Like Captain Dreyfus, Cardinal Pell is an unpopular figure in his own country. He has been vilified by the media, hounded by accusations that he covered up sexual abuse, made to appear as the principal cause of the scandal in Australia. That characterization is unjustified. Although he was not blameless in his handling of abuse cases — and has admitted as much — his “Melbourne Response” was the best set of policies at the time; his reaction to the crisis was considerably better than that of other Australian prelates. The truth of the matter is that Cardinal Pell became the favorite target of the media because he was an unapologetically orthodox (call him “conservative” if you must) Church leader, in a country where such courageous Catholic leadership is a rarity. He was, like Dreyfus, a convenient target; ideologues wanted him to be guilty.

However, the cardinal's unpopularity is — or rather should be — irrelevant to the case at hand. The question at issue before the courts is not whether he was likable, not whether he was sympathetic, not even whether he was effective in dealing with abusive priests. The question was whether or not he personally molested two choir boys. And there was — and is — absolutely no evidence to support that charge, except the word of one accuser.

The appeals court ruled that the jury was not unreasonable to believe the cardinal's accuser. But as Notre Dame law professor Gerard Bradley points out, the court was obliged to weigh the accuser's testimony against the other available evidence, and when weighed in that balance, it was indeed unreasonable to credit the accusation.

Unless there had been a video camera running constantly in the cathedral sacristy, what more could the Pell defense team have done to defend the cardinal against this charge?

Consider, too, that the accuser said nothing about this alleged crime for years. He came forward in June 2015 — two years after police began hunting for evidence of wrongdoing by Cardinal Pell. And his story of the alleged incident in the sacristy was suspiciously similar to a story that had been published in Rolling Stone nearly four years earlier. Keith Windschuttle of Australia's Quadrant magazine remarked that “the two accounts are so close to being identical that the likelihood of the Australian version being original is most implausible.”

Justice Mark Weinberg, the appeals court jurist who voted in favor of the cardinal's appeal (in a 2-1 decision), made the obvious point that the accuser's credibility was questionable at best. He remarked that “the complainant's account of the second incident seems to me to take brazenness to new heights, the like of which I have not seen.”

Against this single shaky witness, the court heard more than twenty witnesses who testified not simply that the archbishop did not molest the boy, but that it was literally impossible for him to have committed the crime as described.

The appeals court seems to have fastened on that concept — the notion that the crime was impossible — and found it wanting. It's true; it is possible that Cardinal Pell committed this crime — in the same sense that it is possible I'll be hit by lightning this morning, although at the moment I don't see a cloud in the sky. Nearly anything is possible. But is it plausible? Does it satisfy the standard — in Australia as in the US — that a defendant must be found guilty beyond a reasonable doubt? Not even close.

So how is it that the Australian courts found the accuser's evidence compelling? The only possible explanation, I think — apart from the evident eagerness to convict an unpopular figure — is the growing tendency to believe that anyone who brings an accusation of sexual abuse must be believed, regardless of the specific circumstances. And haven't we seen that tendency at work in our own American courts — especially in the court of public opinion?

In the vast majority of sex-abuse cases — especially those involving incidents from the distant past — there is no hard physical evidence, and the only witnesses are the accuser and the accused. A “credible accusation” is not a legal conviction. How many innocent priests have been suspended from ministry on the basis of a single “credible accusation,” which they cannot disprove? After years of winking away reports of abuse, have we swung so far in the opposite direction that we now demand convictions without evidence? Angry Americans want to see abusers punished, and rightly so. But beware of empty accusations and convenient victims.