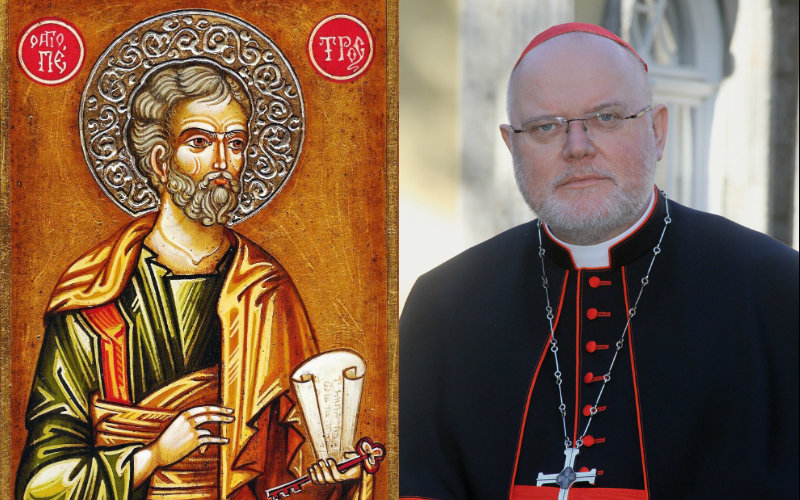 June 28, 2016 (LifeSiteNews.com) – According to Cardinal Reinhard Marx, homosexual relationships have “worth,” a worth that must be recognized by the Catholic Church.

“We have to respect the decisions of people,” Marx told the media last week in Dublin after delivering a speech at Trinity College, according to a recent report in the Irish Times.

“We have to respect the decisions of people. We have to respect also, as I said in the first synod on the family, some were shocked but I think it’s normal, you cannot say that a relationship between a man and a man and they are faithful [that] that is nothing, that has no worth,” he said.

Consequently, according to Marx, the Church owes homosexuals an apology for its historical treatment of homosexuals. “As Church and society, we have to say ‘Sorry, Sorry,’” Marx said. He added that the Church should support “regulating” homosexual partnerships. “We as church cannot be against it.”

Marx’s statements seem to fly in the face of repeated affirmations by some of the Catholic Church’s most authoritative documents, including the Catechism of the Catholic Church, which calls homosexual sexual acts “acts of grave depravity” which are “intrinsically disordered,” and “can never be approved.” They also contradict the Vatican’s 2003 instruction on homosexual unions, which forbids support for legal recognition for homosexual unions of any kind.

St. Peter Damian, a cardinal who wrote the most extensive treatment of the issue of homosexual unions in the Church’s history, also had a very different understanding of the value of homosexual relations from that of Cardinal Marx.

According to Damian’s work on the subject, the Book of Gomorrah, written in the 11th century in response to a plague of homosexual vice among priests and clergy, homosexual unions are in no way beneficial to their participants; to the contrary, they are utterly destructive to them, spiritually, psychologically and even physically, throwing them into an emotional and spiritual confusion that makes them subject to demonic manipulation.

Damian writes that “this vice, which surpasses the savagery of all other vices, is to be compared to no other. For this vice is the death of bodies, the destruction of souls, pollutes the flesh, extinguishes the light of the intellect, expels the Holy Spirit from the temple of the human heart, introduces the diabolical inciter of lust, throws into confusion, and removes the truth completely from the deceived mind.”

Damian recognizes that the logic of homosexual vice leads to ever-more degrading and self-destructive acts, a reality confirmed by those who have come out of the gay lifestyle.  The homosexual relationship “violates sobriety, kills modesty, slays chastity,” writes Damian. “It butchers virginity with the sword of a most filthy contagion. It befouls everything, it stains everything, it pollutes everything, and for itself it permits nothing pure, nothing foreign to filth, nothing clean.”

The homosexual relationship removes “the armaments of the virtues, and to strike them down, exposes them to the darts of every vice,” Damian writes, adding that it “removes the foundation of faith, enervates the strength of hope, breaks the tie of charity, destroys justice, undermines fortitude, banishes temperance, and blunts the sharpness of prudence. And what more shall I say? Since indeed it expels every cornerstone of the virtues from the court of the human heart, it also, as if the bolts of the doors have been removed, introduces every barbarity of the vices.”

Damian notes that individuals who involve themselves in homosexual relationships suffer from anxiety and other psychological disturbances, a fact that has been repeatedly confirmed by numerous peer-reviewed medical studies in recent decades.

Of those who participate in such relationships, Damian writes: “His flesh burns with the fury of lust, his frigid mind trembles with the rancor of suspicion, and chaos now rages hellishly in the heart of the unhappy man while he is vexed by as many worries as he is tortured, as it were, by the torments of punishment. Indeed, once this most poisonous snake has sunk its teeth into an unhappy soul, sense is immediately taken away, memory is removed, the sharpness of mind is obscured; it becomes forgetful of God, it forgets even itself.”

In some ways Damian seems to foresee the behavior of the modern homosexual movement. Using a metaphor that seems particularly appropriate, Damian refers to the homosexual lifestyle as “the queen of the sodomites,” who enslaves and degrades her victims, taking away their peace and instilling in them a frenetic obsession with pleasure. He also notes that those who involve themselves in such behavior feel compelled to draw others into the same wretchedness, by becoming homosexual “militants.”

“This most pestilent queen of the sodomites renders him who is submissive to the laws of her tyranny indecent to men and hateful to God,” Damian writes.

“In order to sow impious wars against God, she requires a militancy of the most wretched spirit,” he continues. “She separates the unhappy soul from the fellowship of the angels, removing it from its nobility to place it under the yoke of her own domination. She strips her soldiers of the armaments of the virtues, and to strike them down, exposes them to the darts of every vice. . . . She gnaws the conscience like worms, burns the flesh like a fire, and pants with desire for pleasure. But in contrast she fears to be exposed, to come out in public, to be known by others.”

In contrast to Cardinal Marx and other Catholic prelates who have recently advocated affirming homosexual relationships or tolerating them, Peter Damian writes that we must avoid the “cruel mercy” of staying silent in the face of evil, and even warns that we become the “murderer of another’s soul” if we do not speak against the immorality of their behavior.

“Who am I to watch such a noxious crime spreading among those in holy orders and keeping silent, to dare to await the accounting of divine punishment as the murderer of another’s soul, and to begin to be made a debtor of that guilt of which I had been by no means the author?” writes Damian, adding later, “For how am I loving my neighbor as myself, if I negligently allow the wound, by which I do not doubt him to be dying a cruel death, to fester in his soul? Seeing therefore the spiritual wounds, should I neglect to cure them by the surgery of words?”

St. Peter Damian’s words were well-received by Pope St. Leo IX, who said “everything that this little book contains has been pleasing to our judgment, being as opposed to diabolical fire as is water.” Today, however, Damian’s warnings are increasingly ignored by European and American prelates in favor of an indifferent and even benign understanding of the sin of sodomy.