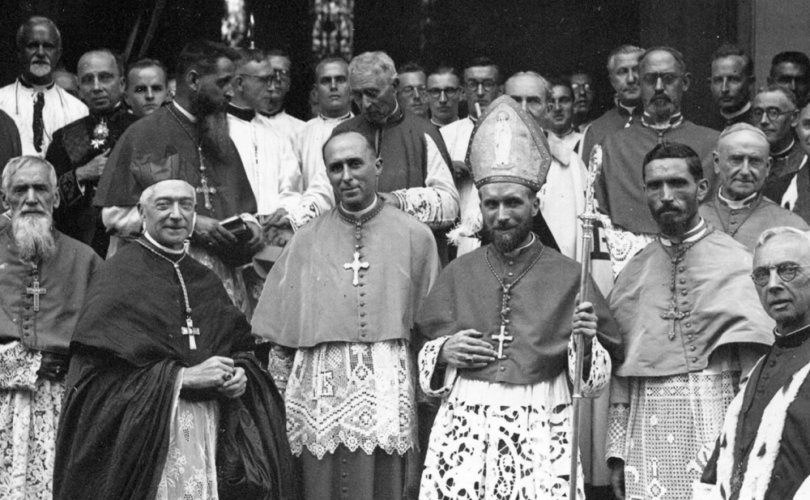 Disclaimer: The views represented in this article do not necessarily represent the views of LifeSiteNews. They are presented only for your information.

September 11, 2020 (Catholic Family News) — Professor Armin Schwibach, a teacher of philosophy and Rome correspondent for the Austrian website Kath.net, has reported on Twitter that a cardinal has recently made to him some supportive comments about Archbishop Marcel Lefebvre, the deceased founder of the Society of St. Pius X.

On August 21, Schwibach wrote: “As a cardinal recently stated: Archbishop Lefebvre will one day recognized as a Doctor of the Church. Therefore, ‘others’ have to measure up to him.” Catholic Family News reached out to Professor Schwibach, and he confirmed that indeed these words have only recently been spoken to him by a cardinal of the Catholic Church. On another occasion, according to Schwibach, this same cardinal added that Lefebvre was “prophetic.” However, the cardinal spoke these words privately and does not wish to say so in public.

This reliable fact, as revealed by Schwibach, is of great importance for the Catholic Church since it shows that there are other high-ranking prelates besides Archbishop Carlo Maria Viganò and Bishop Athanasius Schneider who are seeing the validity of Archbishop Lefebvre’s own sustained criticism of the Second Vatican Council, of aspects of the post-conciliar Magisterium, and of the Novus Ordo Mass.

Time for a Respectful Hearing

It is to be hoped that this cardinal, as well as other prelates who are thinking in similar terms, would come out candidly into the public. It is time for this traditionalist position, which has been suppressed and ostracized for so many decades, to now be respectfully heard. It is a fact that the Catholic mind shrinks when it is disallowed to look at reality and ask questions or present objections. One becomes accustomed to putting blinders on, yet Our Lord is the Light and the Truth, and we can always rest assured that He will bless us when we seek to please Him by searching for and speaking the Truth, without concern for human respect.

In addition to this, it is also my deep trust that we can only come to a fuller and more proportionate assessment of our current crisis and its roots when we commit ourselves to conducting an intellectual discourse in public, where arguments and counter-arguments are clearly presented, thus widening the perspectives and approaches to truth.

It is in this light that I personally regret the course recently taken by Fr. Thomas Weinandy, O.F.M. In his first July 14 response to the recent statements by Archbishop Viganò (specifically, His Excellency’s June 9 text), Fr. Weinandy said he had some sympathies with some of the prelate’s criticisms (“I sympathize with many of the concerns expressed and acknowledge some of the stated problematic theological and doctrinal issues enumerated.”). More recently, however, he proceeded to accuse Viganò in an August 13 essay of effectively serving Satan and of leading souls out of the Catholic Church. As Weinandy stated: “My concern is that, in his radical reading of the Council, the archbishop is spawning his own schism.” He furthermore wrote that Archbishop Viganò, with his criticism of the Second Vatican Council, “I fear, has played into the hand of the devil — the very devil he fears the most.”

This specious argument is old. It has been used for decades with regard to the SSPX, saying that they are “schismatics” in order to discourage faithful Catholics from even reading and considering the Society’s arguments.

In Christus Vincit (Angelico Press, 2019), a book-length interview, Bishop Athanasius Schneider candidly describes his own reaction to Lefebvre and his movement when he said that he felt drawn to his arguments, but then was confused because the local bishops warned the faithful against this “disobedient” archbishop.

Here is how I put it in my book review:

When he [Bishop Schneider] was 15 years of age, he started to read some texts written by Archbishop Marcel Lefebvre, the founder of the Society of St. Pius X, but he “experienced a dilemma.” His own veneration for the reigning pope was in conflict with the insights of Lefebvre that he found “substantially right.” Since he at the time did not read the texts of the 1962–1965 Council directly, but, rather, commentaries by conservative authors presenting them, he had at first “no concern or suspicion that there might be problems with the texts of the Council.” At the time, he practiced a “total ‘infallibilization’ of the Council.”

Now Bishop Schneider sees that this conclusion was wrong. He says: “Nowadays, I realize that I ‘turned off’ my reason. However, such an attitude is not healthy and contradicts the tradition of the Church, as we observe in the Fathers, the Doctors, and the great theologians of the Church over the course of two thousand years.”

Such an attitude to “turn off” reason the bishop now calls “extreme ultramontanism” as well as a “blind defense of everything that was said by the Council, which seemed sometimes to require mental acrobatics and a ‘squaring of the circle.’”

This one example shows: instead of publicly discussing the objections of Archbishop Lefebvre — and several other traditional groups and individuals — many in the Church’s hierarchy ostracized him and thereby suppressed his sincere and well-reasoned arguments. Such a method, however, will not last forever, because the truth will always set itself free.

I have heard in the recent past from several conservative Catholics that they kept away from the publications of the traditionalist movement because they had been told that they are “schismatics”. However, now that they start reading some of their books and critiques, they say: I never knew that! I wish I had known. Others tell me: We have been deprived of so many beautiful elements of our Faith! The new prayer books are often so drab, while the old ones are so much more uplifting and inspiring! We feel our heritage has been stolen from us.

So it goes. The truth always sets itself free. And any prelate who would now honestly address these problems would do a great service to the laity and would thereby help us in the sense of a well-proportioned and well-reasoned debate, for the sake of the salvation of souls.