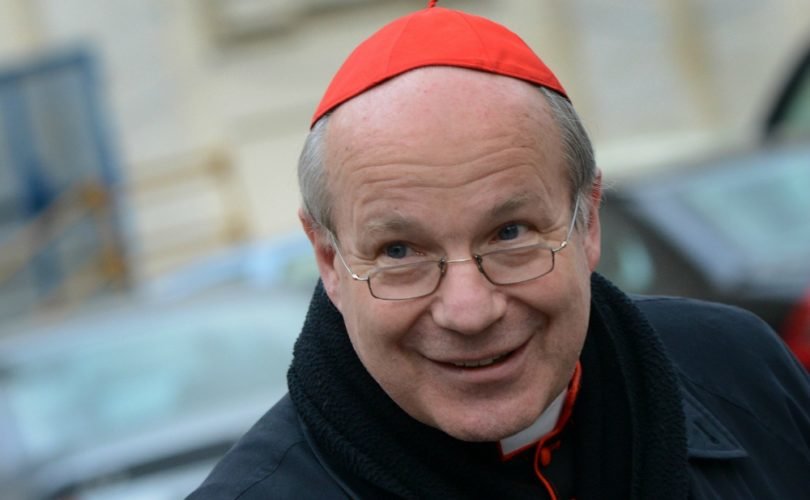 September 16, 2015 (LifeSiteNews) — In an interview with La Civiltà Cattolica, Cardinal Schönborn, archbishop of Vienna, advocated the recognition and promotion of “stable homosexual relationships” because that would be better for the persons involved than the alternative, the well-known promiscuous gay lifestyle. Besides, in these “monogamous” arrangements, there is “sharing of life, joys, and sufferings, … one helps one another,” in short, the persons concerned “would make an important step for [their] own good and for the good of others”. Not fully a “marriage,” but still, a sort of.

Sounds virtuous, but confronted with reality, it is no more than an unbelievably naïve pious pipedream. Beyond doubt, in case the Cardinal would get what he wants in the Church, gay “marriage” and then gay parenting and adoption (and a lot more) would soon follow. But let us here consider his psychological argument in favor of “stable” gay relationships.

He says one homosexual friend was no longer promiscuous now that he was involved in a stable and monogamous relationship. This is what I call “unbelievably naïve.” Come back after a couple of years, and arrange a straightforward, objective examination and evaluation of this man’s and his partner’s affair. Let’s see what came of this monogamy, this loving and sharing. If these partners will appear to have both of them lived together monogamously (which is not the same as having a relationship) for more than 5 years, inclusive of sexual contacts, their case would qualify for being extensively published because it will be an interesting psychological rarity. During the almost 50 years I am involved in the study and treatment of homosexuality I have heard now and then about such a case, but when more information became available, it invariably appeared that appearances are deceptive. That is also the opinion of gays or ex-gays who know what they are talking about. Let two quotes suffice.

Noel Mosen, an ex-gay who lived many years in gay circles in Europe: “I also personally got to know gay couples who were internationally held up as examples of committed homosexual love relationships and I know that in reality they were characterized by loveless behavior, constant unfaithfulness, and mutual abuse.”1

And an inquiry among its readership by a German gay magazine found that 94 percent of the respondents’ “steady relationships” did not outlast half a year. The editorial commented, not without some irony: “With stormy optimism, already shortly after one got acquainted with another the bond for life is being contracted, inclusive of fidelity. But after a short while 9 out of 10 friendships miscarry…”2

Promoting “steady relationships” is selling an illusion. What is the result? Precisely the opposite of what it is claimed to effect. It leads to enhanced promiscuity. The best statistical investigations illustrate this sobering fact: a German study reported that the number of sexual contacts of homosexually partnered men was more than twice than that of non-partnered;3 a large Dutch study showed that on average the number of partners outside the “steady” or “stable” union (partnership, “marriage”, or whatever it may be called) was 2.5 in the first year, going up to on average 11 in the sixth year of the union.4 The increased promiscuity of partnered gay men explains their substantially higher risk of contracting HIV infections.5 The inherent psychological tensions, emotional instability, and conflicts of homosexual relationships or “marriages” appear from such data as the eight times greater suicide risk of men in these relationships as compared with normally married men6 and the finding that partnered or “married” gays and lesbians (in Denmark, for instance) are likely to die even younger than non-partnered (The lifespan of practicing homosexuals in general is already shorter than of heterosexuals).7

In addition, as a review of many studies concerning the proverbial so-called “domestic violence” in male gay unions stated: “The emergent evidence … demonstrates that intimate partner violence – psychological, physical, and sexual – occurs in male-male partnerships at alarming rates.”8 So much for the idyllic daydream of the virtuous gay union.

Idealists like Msgr. Schönborn live on a rosy cloud. Many gays are more realistic. They know well one of the pivotal facts of the practice of homosexuality: its intrinsic promiscuity. Prominent German gay activist, homosexuality researcher and professor of sociology Dannecker stated unequivocally that homosexual men have a “different” sexual nature, and this is a promiscuous one.9 An experienced gay man, after many “eternal” partnerships, commented, “Homosexual ties begin and end with sex. There is so little else to go on.”10 The well-known Catholic American publicist Andrew Sullivan, a practicing gay man, is a proponent of gay “marriage,” stipulating however, that this particular “marriage” contract has to be “open.” For it should reflect the “greater understanding for the need for extramarital outlets between two men than between a man and a woman.”11

Msgr. Schönborn’s naive idealization of gay relationships is at the same time highly irresponsible. With his authority as a prelate he in fact tries to seduce people troubled by same-sex desires to live them out in a way they may delude themselves into thinking is psychologically viable and morally defensible. But his way leads to their emotional and moral undoing, and often also to their medical ruin. Don’t take his medicine, it’s poison.

Gerard J. M. van den Aardweg, PhD, is a Dutch psychologist and psychoanalyst with a research focus on homosexuality. He is the author of On the Origins and Treatment of Homosexuality: A Psychoanalytic Reinterpretation and The Battle for Normality: Self-Therapy for Homosexual Persons.