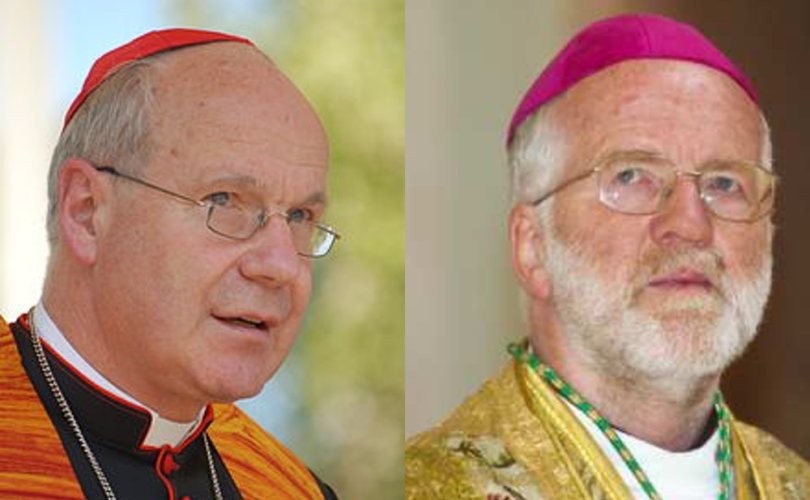 Cardinal Schönborn then criticized Bishop Laun for what he called comparing same-sex relationships with concentration camps.

“It certainly is not acceptable to mention the value of same-sex relationships at the same time as mentioning the mafia or concentration camps, as it now unfortunately has happened,” said Schönborn. “These things are not to be compared. To talk like this is unacceptable.”

All Bishop Laun said was that God’s blessing cannot be asked for sin, giving a concentration camp as an example of what “one could not bless.”

It would have been understandable if the Cardinal had remarked that, given the over-sensitivity of the militant gays and their consorts in the world and in the Church, it would have been better if Bishop Laun had perhaps not mentioned the mafia and the camps in whatever association with homosexual sin.

But, objectively and logically, nothing indeed was wrong with what the bishop had written. The innocent meaning was evident. The bishop might have been better served had he not used this example, realizing his gay opponents could abuse these words to crush his argument by playing the 'murdered innocent' and painting him black as a pitiless moralist whose view no one can take seriously.

Cardinal Schönborn verbally attacked the bishop despite knowing him as a man of character with a record of defending and explaining the moral doctrines of the Catholic Church on marriage and sexuality, quietly and manly, in their integrity and purity.

I can vouch for Bishop Laun, for I have the privilege and honor to personally know him and his defense of Church teaching in relation to homosexuality for many years. He has written excellent things for homosexual persons which anyone can consult, inclusive of Cardinal Schönborn and some other Austrian Bishops.

I can say that he really has helped a number of Christians with this affliction to live as God wants them to. Among other things, he has organized a congress of Christian therapists and scientists to promote the available knowledge on the subject.

I wonder how many of his colleagues have been practically involved in this subject like this bishop? How many have taken pains to personally orient and coach homosexual people and have extensively studied the subject to that aim? And how many Austrian Bishops have actively promoted, explained, preached, and written so extensively, simply, and clearly about marriage and Humanae Vitae, for young people and older ones, as this Bishop of Salzburg?

It can be said that Cardinal Schönborn has a different record in this matter when compared to Bishop Laun. More and more, the Cardinal has preached the psychologically nonsensical and spiritually terrible, non-Catholic ideology of the “value of same-sex relationships.”

Initially, one might have evaluated this curious preference of the Cardinal’s as typical “pastoral naivety.” But as more evidence mounts, this view has become untenable.

He has gone as far as allowing the desecration of the venerable Stephan’s Dome in Vienna by hosting a homosexual-themed prayer service with a “devote” drag queen. He seems to identify with the sentimentalism and hypersensitivity of those afflicted with same-sex attraction who want to justify and normalize their sexual lifestyle. He seems to identify with their “righteous indignation” when this is not accepted as they demand.

For whatever reason, Cardinal Schönborn embraces too tightly, and by his words and deeds promotes too persistently the deceptive militant-gay ideology. This ideology misrepresents homosexual acts as beautiful and faithful love, not as what the Catechism of the Catholic Church calls acts of “grave depravity” that are  “intrinsically disordered.”

So now, when a straightforward, candid word of criticism regarding homosexuality is spoken by Bishop Laun, the Cardinal’s response clearly and painfully reveals the ideology that he has personally identified with.

That is why the Cardinal can show little sensitivity and understanding for this good Bishop who has helped same-sex attracted people by courageously telling them the liberating truth and straightforwardly calling a 'spade a spade.'

In the end, Cardinal Schönborn’s indignation toward Bishop Laun is quite dishonest and his treatment of him is gravely unfair.