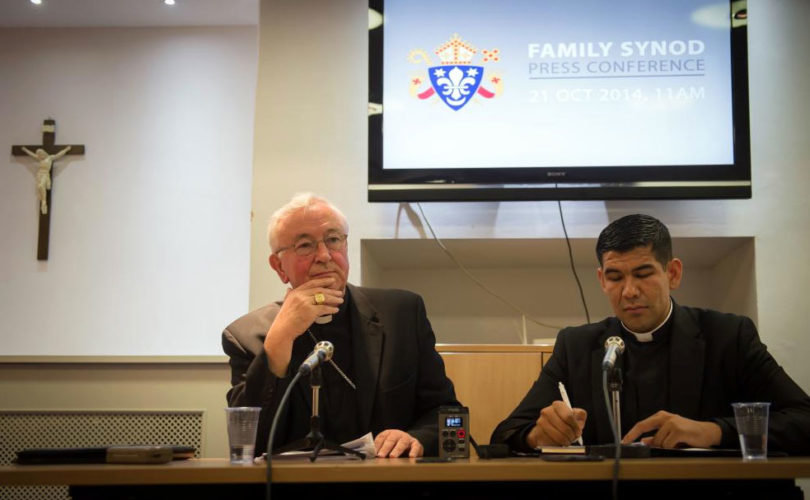 Cardinal Nichols and the Spanish language rep for the press office at the Synod during the Cardinal's press conference on the Synod.

October 9, 2015(Voice of the Family)–Vincent Cardinal Nichols, Archbishop of Westminster, has been elected as moderator of the one of the four English-speaking circuli minores (small groups) at the Ordinary Synod on the Family. The moderator has extensive influence on the direction of the discussion and thus on the content of the final report of the small group.

Cardinal Nichols’s approach to human sexuality has caused the pro-life, pro-family movement grave concern for many years. Serious questions have been raised about his approach to issues as diverse as abortion, contraception, the rights and status of the embryo, sex education, homosexual unions and the reception of Holy Communion for the “divorced and remarried”.

Nichols publicly supports radical activist group LGBT Catholics Westminster, which publicly rejects Catholic teachings on homosexuality. A Mass for “LGBT Catholics” in the Archdiocese Westminster was first established in 1999. In 2009 Archbishop Vincent Nichols (who was made a cardinal by Pope Francis in January 2014)  succeeded to the See of Westminster and continued the policy of official support for LGBT Catholics Westminster. In January 2013 the group moved to the Jesuit church of the Immaculate Conception, Farm Street, from which they continue to run their ministry of dissent.

A leading member of the group, Martin Pendergast, spoke at the LGBT conference held in Rome the day before the Ordinary Synod opened and called for homosexuals to have the “same rights as heterosexuals to receive the sacraments”. Pendergast, who is an civil partnership, is a former member of the Bishops’ Conference of England and Wales social welfare committee. He was also a faith-advisory member of the government’s strongly pro-abortion Teenage Pregnancy Independent Advisory Group (TPIAG) for five years. His partner Julian Filochowski is former head of the CAFOD, the English and Welsh bishops overseas aid agency.

Pendergast told the conference that his movement has the support of Cardinal Nichols. He spoke with satisfaction about the Farm Street “gay Mass”, where “pastoral needs and concerns are welcomed by the parish and the diocese”.

In the light of Cardinal Nichols’s public support for the radical LGBT movement and given the centrality of homosexuality in the discussions surrounding the Ordinary Synod, we would like to draw attention to the following troubling statements that he has made on the subject of homosexuality.

Troubling statements made by Cardinal Nichols on homosexuality and homosexual unions

Stephen Sackur: The Church of England for example in this country is taking a rather different view. They believe there has to be some flexibility. The church has to be a reflection of society’s values to a certain extent and therefore we see women priests, women vicars, and there’s obviously in some parts of the Anglican Communion, women bishops.

Stephen Sackur: Some of their vicars are also prepared to sanction gay unions. That church is showing flexibility. Is the Catholic church not going to have to do the same eventually?

Archbishop Nichols: I don’t know. Who knows what’s down the road?

On 11th September 2010 Archbishop Nichols was interviewed by Neil Tweedie of The Telegraph and asked if the Church would “one day accept the reality of gay partnerships”. He replied:

“I don’t know. There is in the Book of Nature an inherent connection between human sexuality and procreation; and those two things cannot ultimately be totally separate. People who are of a homosexual orientation say: ‘Well, hang on a minute. How is the Book of Nature written in me?’ The most important thing the Christian tradition says is, don’t see yourself simply as an isolated individual but as part of a wider family. The moral demands on all of us made by that tradition are difficult. That tradition says human sexuality is for an expression of total self-giving in fidelity in a way that is open to the creation of new life. Now, that’s tough, that’s a high ideal. I’m not sure many people have ever observed it in its totality, but it doesn’t mean to say it has no sense.”

On 20th September 2010 Archbishop Nichols was interviewed on the BBC by Huw Edwards for a programme reflecting on Pope Benedict’s visit to Britain.

Other interviewees included Diarmaid MacCulloch, a homosexual Anglican and Oxford professor of church history, Tina Beattie, a pro-abortion “Catholic” academic and Lord Patten, who helped to organise the papal visit.

At 21 minutes 30 seconds into the programme, Huw Edwards to put it to Professor MacCulloch that Pope Benedict:

“clearly sees Britain…as a country where there is a lot of growing hostility to faith communities. Is that the right reading?”

“That is a code, and it’s a code for something quite specific. The code is: now Britain treats gay people as equal with heterosexual people, and gay partnerships are on the statute book, and the Catholic hierarchy hates that fact. You see them across the world as gay marriages are introduced in country after country…”

“That’s not true, in this country. In this country, we [the Bishops’ Conference of England and Wales] were very nuanced. We did not oppose gay civil partnerships, we recognised that in English law there might be a case for those. We persistently said that these are not the same as marriage.”

Later (at 24mins50secs into the programme) Archbishop Nichols said:

“The times we [the Catholic bishops’ conference of England and Wales] interfere most in British politics is on poverty and education. Of course the media are obsessed with certain issues but if you want to know what it is we’re really passionate about, it’s about the fight against poverty and the education of young people.”

Later (at 27mins30secs into the programme), Professor MacCulloch said:

The interview did not contain any contradiction by Archbishop Nichols of Professor MacCulloch’s statement that the “English Catholic Church” took a different line to “the Vatican”.

On 26th November 2011 The Tablet reported the following words of Archbishop Nichols in an article entitled Archbishop Praises Civil Partnerships:

“We would want to emphasize that civil partnerships actually provide a structure in which people of the same sex who want a lifelong relationship [and] a lifelong partnership can find their place and protection and legal provision,” the archbishop said. “As a Church we are very committed to the notion of equality so that people are treated the same across all the activities of life.”

Nichols expressed his dissatisfaction with the text of the relatio synodi as follows; “I didn’t think it went far enough, there were three key words as far as I was concerned … ‘respect’, ‘welcome’ and ‘value’.” He continued, “I was looking for those words and they weren’t there and so I didn’t think that was a good paragraph.”

Marriage Care is an organisation which provides counselling services to same-sex couples. The Tablet reported, on 15th September 2011, that the Chief Executive of Marriage Care, Terry Prendergast, had said of same-sex couples; “We have offered them focused marriage preparation – private, and not in a group. This is about two people in love and one of our main aims is to support loving partnerships.”

In a document on their website Marriage Care explain:

“Today, Marriage Care sees itself as a service provider of relationship education and support to all sections of the community, delivered from within a Christian ethos, developed from the organisation’s Catholic roots. We understand this Christian ethos to mean in practice that we are open to all, acknowledging the value and uniqueness of every human being regardless of gender, age, race, creed or sexual orientation.
…
“So, for Marriage Care, the Christian ethos is not made up of a set of doctrines but rather is an exhortation to the members of the charity to be visible by their inclusive and loving behaviour of the other by providing a rich variety of services across the whole community.”

Further disturbing remarks made by Cardinal Nichols about homosexuality can be found here.

Reeprinted with permission of Voice of the Family.