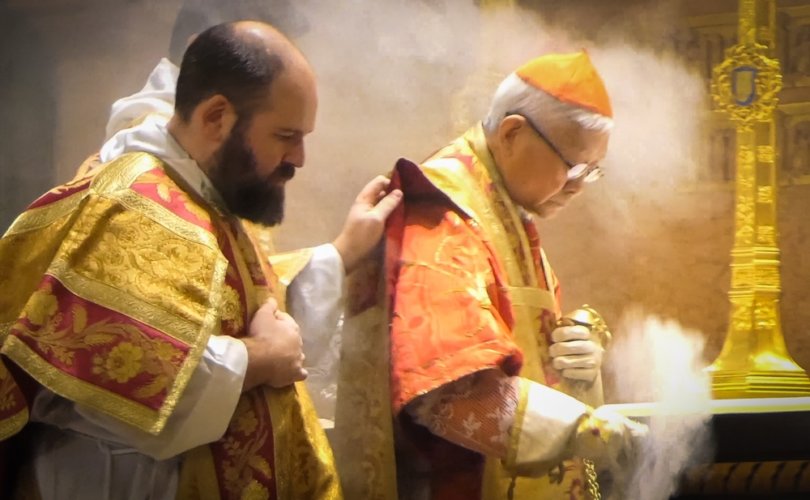 February 17, 2020 (LifeSiteNews) – It would be easy to understand if 88-year-old Cardinal Joseph Zen had been weary and less than eager for an interview. He had traveled to New York after a grinding schedule of long flights, interviews, and meetings. But he was joyful and relaxed when he showed up for his interview with LifeSite’s Claire Chretien in Manhattan.

Cardinal Zen, the Bishop Emeritus of Hong Kong, was 15 minutes early. The only hint of his age is when he cups his ear and leans forward, but it doesn’t take long to see that Cardinal Zen has no interest in taking it easy for the rest of his life. He sits up straight and answers all of Claire’s questions with lengthy, impressive, and passionate responses. His volume and intensity increase as Claire hones in on the severe oppression of the Church in China and Hong Kong, and the betrayal by the Vatican ceding power to the Communist regime.

Until recently, Cardinal Zen held back from making critical comments about Pope Francis, but that has changed, and now for the first time, Cardinal Zen had strong words of criticism for the Pope.

“Unfortunately in all these years he never had any critical word about what’s happening in China, always praising the Chinese government,” he shared.

And there is no doubt that Cardinal Zen thinks Pope Francis has hurt the people of Hong Kong who have been fighting the Chinese government’s brutal crackdown on freedom. “He [the Pope] said, ‘oh yes, there are difficulties in Hong Kong, in France, South America, and I’m not possessing all the elements, so I just pray for peace.’ So, he said nothing again.”

Cardinal Zen bluntly stated that Vatican Secretary of State Cardinal Pietro Parolin, the architect of the Holy See-China deal, is “not a man of faith.” During the 20-minute interview, the Cardinal seemed to forget about how tired he was, becoming more and more animated throughout.

When Claire asked him what Catholics around the world can do to help, he highlighted the thing that communists hate the most: the truth. “To be well-informed, not to be cheated, because there are too many voices not about the truth, about illusions, or lies. Be well-informed to distinguish between the truth and the lies.”

The following day, I covered the Solemn High Pontifical Mass Cardinal Zen offered at the Church of St. Vincent Ferrer. Again, I was humbled by the Cardinal’s stamina. The discipline and mechanics required to preside over a High Mass are demanding for any man.

All those in attendance knew this was not just any Mass. There was a solemnity and seriousness I have never experienced.

I wanted to get up close to see this saintly man in action, but security was all over the place. Let’s face it: the communists would prefer Cardinal Zen dead. Just as I was thinking about how I could finesse my way to the front, a plainclothes officer approached and asked if I would like to be escorted to the side chapel for a better view. Watching Cardinal Zen carefully and expertly offer the Mass was a marvel. His Latin grew in volume and strength.

Afterward, he proceeded to the Lepanto Conference, where he gave the keynote address to a standing room only crowd. He was unscripted and animated. He reminded the faithful to safeguard the faith and the truth, in honor of those who suffer at the hands of the communists and their apologists at the Vatican, including the Holy Father: “Pope Francis has not one word of comfort, not one word of consolation.”

EXCLUSIVE: Cardinal Zen criticizes Vatican for ‘despis[ing] the heroes of faith’ in China