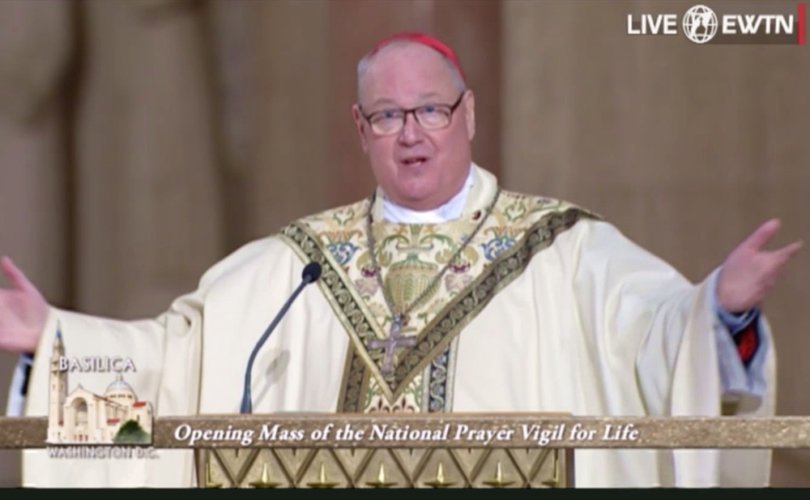 Cardinal Dolan gives the homily at the 2018 March for Life vigil Mass at the Basilica of the National Shrine of the Immaculate Conception in Washington, D.C.

January 28, 2019 (CatholicCulture.org) – “The last temptation is the greatest treason: To do the right deed for the wrong reason.” –T.S. Eliot, Murder in the Cathedral

As the Washington Post (!) reported on calls for the excommunication of New York's Governor Andrew Cuomo, who had strongly backed and applauded the state's radical new abortion-on-demand legislation, Cardinal Timothy Dolan told CNN's Daniel Burke why he didn't think excommunication was a good idea. The cardinal made four points. One of those points made sense.

Let's review. We'll take Cardinal Dolan's points out of order, since it's his 2nd point that makes sense:

Second, notable canon lawyers have said that, under canon law, excommunication is not an appropriate response to a politician who supports or votes for legislation advancing abortion.

Fair enough. The Code of Canon Law provides for a variety of ecclesiastical sanctions, to be applied under different circumstances. Those of us who are not canon lawyers tend to think first of excommunication, but in fact a bishop has different options at his disposal. Ed Peters, who is a canon lawyer, has explained the details. But if excommunication is not the right option, the fact remains that some form of ecclesiastical discipline is not only appropriate but absolutely necessary. And since the offense has been public, the remedy must also be public, as Msgr. Charles Pope has explained:

It is time to end the charade, even the lie, that Andrew Cuomo and others like him are Catholics in good standing. They are not, and this must be made plain to them and to others.

In his talk with CNN, however, Cardinal Dolan does not suggest alternative forms of Church discipline. He concentrates on excommunication – perhaps unintentionally strengthening the non-specialist's mistaken tendency to think that this is the only option, that it's excommunication or nothing.

Back to the cardinal's talking points:

Right; excommunication is not properly used as a weapon. It is used as a medicinal remedy, in an effort to persuade the offender that he must repent for the good of his own soul. In the case of a public offense – such as the enthusiastic support of the unrestricted legal killing of innocent children – a public announcement of excommunication (or some other canonical discipline that the bishop deems appropriate) also serves the necessary purpose of eliminating a scandal.

Third, from a pastoral perspective, if a pastor – and a bishop is certainly a pastor of a diocese – knows of a grave situation involving a parishioner, it is his duty to address that issue personally and directly with the parishioner. That was the approach of Cardinal O'Connor and Cardinal Egan (both of whom I served), and it is Cardinal Dolan's approach as well.

Good. I trust, then, that Cardinal Dolan has spoken personally with Governor Cuomo, and done his best to change his mind. Obviously that hasn't worked. Now what?

Fourth, and finally, from a strategic perspective, I do not believe that excommunication would be effective as many politicians would welcome it as a sign of their refusal to be “bullied by the Church,” thinking it would therefore give them a political advantage.

Maybe so. In fact, probably so. Governor Cuomo would no doubt find ways to turn any disciplinary action to his political advantage. Cuomo is a powerful and skillful politician; Cardinal Dolan is neither. If this conflict plays out in the political arena, Cuomo will win. Then again – have you noticed? – he's winning now.

And what of it? From the cardinal's perspective this is not – at least it should not be – a political contest. This is a battle for souls. The cardinal's responsibility is not to devise political strategy, but to protect the integrity of the Catholic faith. If he would do his job, and take some public action to acknowledge that Cuomo has broken his ties with the Church, then professional politicians who are believing Catholics would find it much easier to advance the pro-life cause.

Would the pro-life cause suffer some short-term losses in the wake of disciplinary action? That's possible – although in New York today, in the wake of this latest legislation, things can't get much worse. Would the Catholic hierarchy be pilloried in the mainstream media? No doubt. But again, that's happening already.

As I've observed in the past, Cuthbert Tunstall had a great deal to lose if he stood up to Henry VIII: specifically, he would have lost his head. So it's easy to understand why he didn't oppose the king. It's not so easy to see what a Catholic bishop in New York would lose today by invoking the appropriate discipline on Governor Cuomo.

And remember, too, that the story of Cuthbert Tunstall has a happy ending; when the lines were drawn even more clearly, he – and all the other English Catholic bishops of 1559 – did uphold the Catholic faith, and willingly paid the price for his fidelity. This, the historian James Hitchcock has observed, is “a fact which demonstrates the possibility of thoroughly reforming a national hierarchy.”

Thorough reform of a national hierarchy: could anything be more beneficial for the Catholic Church in America today? It could begin with clarity: the sort of clarity that would come from clear, public canonical disciplinary action in this case.