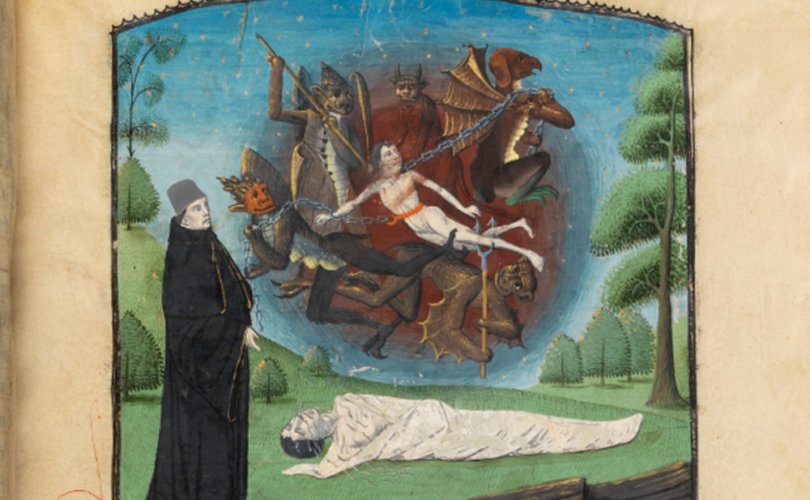 July 7, 2020 (LifeSiteNews) – The current controversy regarding the imaging of black people is as broad and as complex as any issue involving strong views, intense emotions or passionate ideological positions.  I wish specifically to address the views which evoke controversy on art depicting the devil as black.

It is important to understand that although the Church is flexible and accommodating in the manner in which she preaches the Gospel to the world, her faith and doctrine is always presented in precise theological language.  Based on each one’s individual ability (Mt.25:15), the faithful, however, will grasp and articulate that faith in various concrete ways.  The faithful include artists, such as painters, sculptors, iconographers, musicians, all using their particular genius, talents and skills to exteriorise Christian ideas, their understanding of the faith or, the insights they possess.  Correspondingly, throughout the centuries, Churchmen have employed, sanctioned and supported various artists and craftsmen whose masterpieces grace the walls, windows and ceilings of our places of worship.

Art is the fruit of an outstanding ability to produce a piece based on aesthetic principles.  It is the production of a work that is receivable by the senses.  Its primary task is to allow ideas to shine forth with a wholly new profundity and power and to manifest the ultimate secrets of reality.  The primary purpose of art is simply to present an idea: not to produce something.  Beauty is in the eye of the beholder and, a given art piece may provoke reactions in viewers varying from wondering admiration to violent disgust.  One is reminded of casting pearls before swine (Mt.7:6).

The artist can be compared to a seer who is able to penetrate the innermost depth of existence or, to a creator whose handiwork expresses his or her vision.  While artists can prostitute themselves, at the risk of self-degradation, the work produced can still be an expression of genius.  Equally, viewers can pervert themselves by denouncing a work of art as representing only what their own biases have projected on it rather than that which the artist actually intended.

At this point, I wish, again, to make it clear that I am addressing only the particular issue of why the devil is depicted as black.

In Christian iconography, which varies from region to region, from age to age or from century to century, a different colour is used to represent a given virtue, vice, passion or person.  Thus, for instance, while blue is associated with Our Lady in late Western art, red is used in Eastern or Orthodox art.  In Western art, the use of any colour would be dependent on the period, the nation or the region.  The colour green could be used to signal new life, Eden and Paradise.  Red evokes a lover’s lips, Christ’s wounds, the flames of hell and the power of the Holy Spirit.  White denoting truth, purity, and perfection is also associated with death.  Blue is linked to the divine. However, it can also stand for something that is unusual and potentially dangerous.  Colour is a marker of difference and distinction.  Its monetary and symbolic values can reflect social hierarchy and moral norms.  Garments of particular shades indicate status, occupation and religious or political affiliations.  The colour of a monk’s habit indicate his order, stately robes and academic gowns are of a certain colour and hue, lawyers usually wear black robes and people at a political rally proudly wear their party colour.  Colour not only influences how individuals are perceived by others but, also, expresses personal beliefs and aspirations.

Colour, attributed to particular vices or virtues, translates into language.  We say ‘green with envy’, ‘black with rage’, ‘seeing red’, ‘yellow belly’ for cowards, ‘red-blooded’ for courage or ‘blue-blooded’ for royalty.  A white flag represents surrender, a ‘golden opportunity’ should never be missed, a grey area indicates uncertainty.  We wait for the green light, watch for a blue moon, hate red tape’, dress elegantly for the black tie, love to be tickled pink and create white lies to cover our butts.

It is shallow, therefore, to say the least, that the devil painted black is a psychological instrument of racism, let alone, a motive to denigrate black people.  Artists will create or produce works of art but have no control over the viewer’s interpretation.  However, although the viewer is free to express an opinion regarding any work of art, it is unfair to the artist when viewers express their own subjective perspective so that the artist’s intention is completely lost.

The question arises, ‘Why are two opposing persons depicted by the same colour?’  To answer that question, we need to return to the mind of the artist and ask what theological idea or truth did he or she intend to portray.

Black is a “colour” that absorbs light and reflects nothing, that is, it takes everything and gives nothing in return.  This phenomenon characterizes the epitome of evil.  It indicates that God’s gifts are received and nothing is returned as in the parable of talents.  It is much like the Dead Sea which receives the life-giving waters of the River Jordan but, having no exit, it keeps the waters for itself.  Hence, its water is black and dead.  Lucifer, whose name means “light bearer”, was given a plenitude of natural gifts but falling in love with himself, he declared his “non serviam” and, while retaining his gifts, became darkness itself (Gen. 1:4).  In depicting him as black, his egotistical character and his self-absorption is being stressed, while his cunning, mendacious and malice are reflected when he is painted white.

In the case of Blessed Virgin Mary, between four to five hundred, depending on classification, Black Madonnas can be found in Europe: Our Lady of Luxembourg, of Bistrica, Croatia, of Montserrat, Spain, of Czestochowa, Poland, of Mayfield, England, of Good Deliverance, Paris, France, of Altotting, Germany, of Vilnius, Lithuania, of Nazare, Portugal and of Loreto, Italy.  These black depictions of Our Lady articulate the cry from the biblical Canticle of Canticles (1:5-6) and “Nigra Sum”: that is “I am black but beautiful…”  Yet, in her many apparitions, Our Lady often adopts the similitude of the locality, such as an Aztec Indian in Mexico (1531), a Queen at La Salette (1846), a young girl at Lourdes (1858), a queen mother at Rue du Bac (1830), an Indian woman at Vailankanni (1500s), an Egyptian in Zeitoun in Egypt (1968), an African woman in Kibeho, Rwanda (1981), a Chinese woman in Donglu (1900), a Columbian in Las Lajas, Columbia (1754), a Filipina at Manaoag in the Philippines (1610).

As a race, especially in this hemisphere, we have suffered and are suffering, because our race is called black and there exist a colour also called black which is being narrow-mindedly viewed from a negative perspective.  These negative perspectives stem not only from the system but also from each other and from black leaders, both secular and religious, who take advantage of the masses encouraging them to wallow in pity pots of fabrication that someone out there is causing them oppression because they are black.  Again, let me stress that I am answering the question from only one perspective and in no way wish to minimise or deny that our people have and are suffering greatly from systems, biases, bigots and racists. After all, black, like any other colour, remains a colour.

And, whether the devil is painted black, blue, green or white, is absolutely immaterial.  What is required for the advancement of the human race are men and women of integrity who live heroic lives and, are worthy of emulation.  This means that we, as human beings, must all conform to the divine precept of loving our neighbour as ourselves.  In this way, we will image Him who is the image of the Unseen God (Col.1:15), who being pure spirit, is unbounded by colour.

Note about photo at top: The striking images in this ‘Mirror of Sinners’, a poem on death and damnation, exploit the multiple meanings of colours. Crawling with maggots, a corpse lies on the ground, cocooned in a white shroud. Standing nearby is the author of the text, dressed in a black robe. Here, white signals death and decay, while black is a sign of learning and authority. Having left the body, the airborne Soul represented by a naked figure is assaulted by demons. The Soul’s pale flesh stands out against the blood-red cloud, a portent of the fiery depths of Hell.