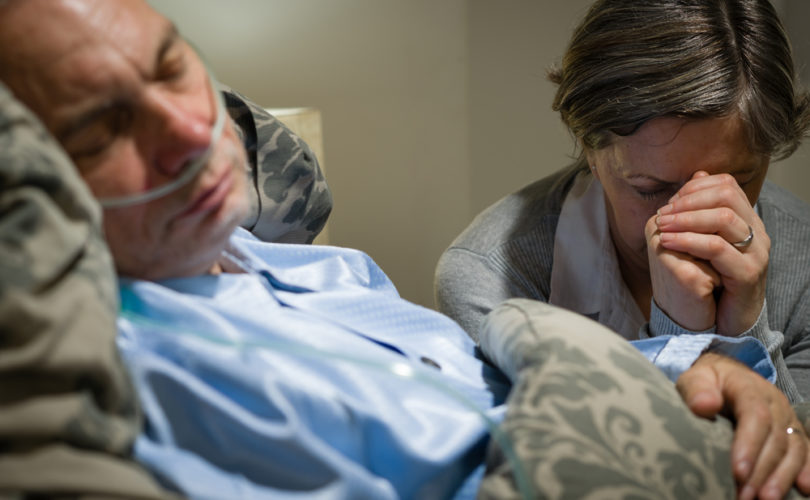 A week ago I received a message from a distressed family writing about a loved one in the final stages of living.

The members of this family were informed by hospice care that their dying relative, a 95-year-old father/grandfather with dementia who still recognizes the family and talks with them at times, had come down with pneumonia. They were told he had no chance of recovering due to his reduced lung capacity. As a result, he had been put on 100 percent oxygen (pure oxygen delivered by a ventilator).

Concerned with the fact that their loved one had not been provided any nutrition or hydration by tube, but rather was being given “thickened water and juices,” they asked two different Catholic priests what the Church teaches on this question. They received two very different responses and were confused.

They asked this question: Should palliative care include nutrition and hydration by tube even if the chances of living a long time are non-existent? Or, to put it another way, they wanted to know if palliative care could be a guise for slowly starving the patient to death if he could not take in food on his own.

Their e-mail raised a red flag because of the evidence we have collected regarding pro-euthanasia groups like Compassion & Choices that argue in favor of defining nutrition and hydration as “treatment” rather than basic comfort care, especially when it is delivered by tube.

In view of this fact, I suggested to them that the best course would be to monitor the situation closely. It might well become obvious to them that providing nutrition and hydration to their dying loved one by using a feeding tube might make him more comfortable during his final days.

When we hear stories like this, which are all too common, we recall the words of St. John Paul II. In his comments, he was referring to those in what is falsely called a “vegetative state,” but they are also words that apply to anyone, including this 95-year-old man. The pope taught:

I should like particularly to underline how the administration of water and food, even when provided by artificial means, always represents a natural means of preserving life, not a medical act. Its use, furthermore, should be considered, in principle, ordinary and proportionate, and as such morally obligatory, insofar as and until it is seen to have attained its proper finality, which in the present case consists in providing nourishment to the patient and alleviation of his suffering. . . .

Death by starvation or dehydration is, in fact, the only possible outcome as a result of their withdrawal. In this sense it ends up becoming, if done knowingly and willingly, true and proper euthanasia by omission. . . .

In this regard, I recall what I wrote in the encyclical Evangelium Vitae, making it clear that “by euthanasia in the true and proper sense must be understood an action or omission which by its very nature and intention brings about death, with the purpose of eliminating all pain”; such an act is always “a serious violation of the law of God, since it is the deliberate and morally unacceptable killing of a human person.”

These simple words represent Church teaching and can bring clarity to difficult situations like the one described in the e-mail we received.

Please keep this elderly gentleman and his loving family in your prayers.

Finally, please note these suggested actions you can take to help others see what is required to ensure respect for the dignity of the one who is dying: