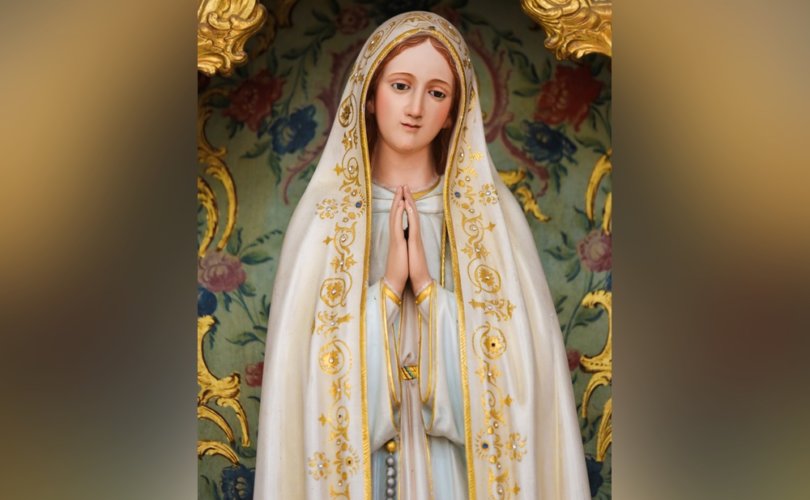 Statue of Mother Mary in the Cathedral of Aveiro, Centro region, Portugal.Shutterstock.com

May 9, 2018 (LifeSiteNews) – This past weekend was the 200th anniversary of the birth of Karl Marx, who is widely recognized as the architect of the most brutal and bloodthirsty philosophy ever to scar the earth: Atheistic Communism.  On the occasion of this infamous event, it was my intention to write an article about the horrors of Communism, the legacy of Karl Marx, the Marxist hatred of humanity, and even his connection with secret societies.

After countless attempts to write this article, committing well over 5,000 words and three days of chasing rabbit holes and rhetorical dead ends, two things became painfully obvious to me.  The first is that the bitter fruits of Marx’s ideologies are self-evident, and the second is that I am not as clever as I thought.

On the verge of abandoning my article, my wife suggested that I take a walk and pray the Rosary, and since Our Lady has never failed to help me when I ask, I knew that this was inspired advice.

It didn’t take long into my Rosary to realize that the answer to the problem of Marx was resting in the very beads I held in my hand; each of the Joyful Mysteries I had been praying was an answer provided long before Marx’s birth to his philosophy of revolution.

The First Joyful Mystery: The Annunciation

Marx’s entire philosophy is built upon the tension between two vices; greed and envy.  He accuses, not entirely wrongly, the upper class of the greedy enslavement of the lower classes.  But rather than address the upper class and remind them of their duties through filial love to care for those who struggle to feed their families, he appeals to the suffering of the laborers and fans the flames of envy into an all-out rage.  His demagoguery is built upon vice, encouraging a class warfare that leads directly to revolution.

In the first mystery of the Rosary, we meditate on the Annunciation of the Incarnate Word, given to Our Lady by the Angel Gabriel.  St. Bernard of Clairvaux explained in his homily In Praise of the Virgin Mother:

“You have heard, O Virgin, that you will conceive and bear a son; you have heard that it will not be by man but by the Holy Spirit. The angel awaits an answer; it is time for him to return to God who sent him. We too are waiting, O Lady, for your word of compassion; the sentence of condemnation weighs heavily upon us.”

It was through Our Lady’s reply, “Thy will be done,” that she answers the war of vices proclaimed by Marx.  Marx announced a revolution which he claimed would be the salvation of the working class, and it was a revolution predicated on grasping at power, wealth and control for the supremacy of the state.  Yet, Gabriel announced the salvation of men’s souls through the shedding of Divine blood!  All of Heaven awaited her answer because without her willful consent to God’s proposal, man was doomed to the material salvation offered by the likes of Karl Marx.  Through meditation on this mystery, we give thanks to Almighty God for Our Lady’s consent to bring the Savior into the world.

The Second Joyful Mystery: The Visitation

As soon as Gabriel left Our Lady, Scripture tells us that she “made haste” to be with her cousin Elizabeth, who was then in her sixth month of pregnancy.  Thus filled with the Holy Spirit, and carrying the Christ in her womb, Our Lady’s first desire was to help family and serve others.  She is the very model of the corporal works of Mercy.

Marx, on the other hand, proposes a system that abolishes and ridicules the service of charity and seeks to impose a heavy-handed system of a labor-fed society.  In Marx’s system, there is no love of neighbor, but only the service of all under the imposing gaze of the state.

The Third Joyful Mystery: The Birth of Christ

As we contemplate the Birth of the Savior of mankind, we have in mind the image of Joseph, Mary and the infant Christ Child lying in a manger.  This image alone could fill volumes of contemplative meditations.  Here, we see the image of the Holy Family as an Earthly representation of the Holy Trinity; Joseph the Father, Our Lady filled with the Grace of the Holy Spirit, and Our Blessed Lord bridging the gap between Trinity and Family.  But in all the various ways we could contemplate this Mystery, what remains is the image of the family.

Marx’s revolutionary manifesto asked, “What will be the influence of communist society on the family?”  His answer is to abolish it by destroying its very foundations:

It will transform the relations between the sexes into a purely private matter which concerns only the persons involved and into which society has no occasion to intervene. It can do this since it does away with private property and educates children on a communal basis, and in this way removes the two bases of traditional marriage – the dependence rooted in private property, of the women on the man, and of the children on the parents.

The Fourth Joyful Mystery: The Presentation of the Child Jesus in the Temple

When the priest Simeon received Our Lord from Our Lady, he prophesied: “Behold this child is set for the fall, and for the resurrection of many in Israel, and for a sign which shall be contradicted.”  At this very moment, he foretold of the crucifixion of Our Lord, and in so doing, he told Our Lady that “thy own soul a sword shall pierce, that, out of many hearts, thoughts may be revealed.”

Here we can see the willingness to suffer and die out of love.  Our Lady knows that because she shares in the great joy contained in Our Lord, that she will also share in His suffering.  There is no man who has ever lived who knows suffering like Our Lady does.  At the Annunciation, she knew that if all mankind would fall and suffer because of Eve’s rebellion against her husband and God, that all mankind would be saved because the Christ Child would take the sin and pain of all mankind to Himself, and it could only be accomplished by her consent.  At the Visitation, she knew the joy the Divine Savior growing within her womb would bring to others.  After His birth, she laid Him upon the dead wood of a manger, which is a food trough for animals … a manger that would prefigure the wood of His Cross as He became the food for all mankind.  And while Simeon was prophesying the suffering Our Lady would share in her Son’s Passion, she embraced it all with humility.

In the second chapter of St. Paul’s letter to the Philippians, he said, “Jesus Christ, Who being in the form of God, thought it not robbery to be equal with God: But emptied himself, taking the form of a slave, being made in the likeness of men, and in habit found as a man. He humbled himself, becoming obedient unto death, even to the death of the cross.”

But Marx preaches a rejection of suffering and servitude.  Rather than accepting one’s state in life, Marx preaches an anti-Gospel of envy, where the collective of workers cast off their servitude and rise against the upper class and GRASP what is not theirs.

The Fifth Joyful Mystery: The Finding of the Child Jesus Teaching in the Temple

In the final Joyful Mystery of the Rosary, we read the conversation between Our Lady and Our Lord, wherein Our Lady asks him to explain why He left them frantic for three days.  At the end of the conversation, St. Luke tells us, “And he went down with them, and came to Nazareth, and was subject to them.”

The lesson to be had here is Holy Obedience.  Our Lord delights in those who are obedient.  Beginning with Adam and Eve and running throughout all of Scripture, we see a theme of the curses associated with disobedience and the blessings associated with obedience.  When we are obedient to God and subject to proper authority, we are pleasing to Him.  When we are disobedient and rebel against rightful authority, we incite His wrath.

The materialist philosophy of Marx’s Communist Manifesto is a blueprint for rebellion against God and rebellion against rightful authority.  When one considers the state-sponsored executions, the state-generated famines, the wars, and the spread of abortion, its bitter fruits have resulted in the deaths of countless millions.

Even now, the horrors of Marx’s philosophies are infecting nearly every facet of human civilization.  It comes in the form of contraception, abortion, homosexuality, on-going rebellious movements, and every other man-centered -ism that takes our minds away from the Four Last Things; death, judgment, Heaven and Hell.

As we can see, the Rosary provides the answer.  The Mysteries we meditate upon provide for us an understanding that man is not made for this world, as Marx would have us believe … but that we are made for Love of God and Love of neighbor.  But more than that, The Rosary is the remedy to Marx’s poison.

The Golden Legend tells us that St. Martha went to the Southern part of France, and while she was there, a horrible dragon had taken up residence in the River of Rhone.  The locals, try as they may to defeat it, could do nothing to slay this beast.  According to the Legend, the locals asked Martha for help, who went with them to find the dragon.  They found it devouring a man, but St. Martha approached with the sign of the cross and cast holy water on it, at which point the creature became as docile as a sheep.  She bound it with her own girdle and led it to the villagers, who then killed it with spears.

Through this image, we can see a foreshadowing of the prophesied Triumph of Our Lady’s Immaculate Heart.  Our Lady asked us to pray the Rosary every day.  If the dragon scourging us now is the philosophy of Marx, can we not see how the symbol of the cross and the girdle of St. Martha, which bound her dragon, make the loop of beads and the cross of the Rosaries we have today?  The beast facing St. Martha could not resist her, and neither will the Marxist Dragon of today resist our Lady.

Oh, Holy Virgin of the Rosary, pray for us!