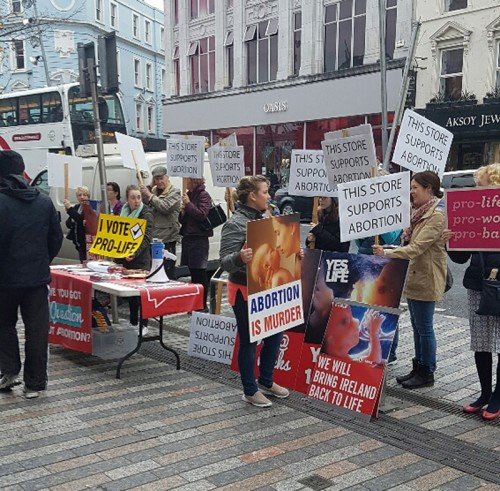 Pro-life protests outside of a Carphone Warehouse store in Ireland.

November 17, 2016 (The Life Institute) — The Chairman of major phone retailer, Carphone Warehouse, has apologised for offence caused by the company’s ‘pro-choice’ advertising campaign which appeared to be taking a position on the abortion debate in Ireland.

The massive advertising campaign, which used a ‘We’re Pro-Choice’ tagline, led to sharp criticism from pro-life advocates, and to pro-life protests outside Carphone Warehouse retail units. Large numbers of pro-life consumers also contacted the company to say they would be bringing their custom elsewhere.

In a letter to a pro-life advocate who had written to complain about the adverts Sir Charles Dunstone, chairman of Dixon Carphone, who own Carphone Warehouse, said:

“I am very sorry that our clumsy advertising caused you such offence. I has been stopped and lessons learned. Please accept my sincere apologies”.

The Carphone Warehouse’s ‘pro-choice’ website for the campaign has also been scrapped.

“After much controversy, including pro-life protests outside its shops and pro-life consumers making their voices heard, we are glad to see that Carphone Warehouse has had the sense to listen to consumers,” said Niamh Uí Bhriain of the Life Institute.

“It would not serve debate or democracy well if huge global companies were spending massive sums which seemed to push one side of the abortion debate – the side which favours legalising killing unborn babies,” she said.  “This is especially true at a time when media pressure is already relentlessly demanding a referendum on abortion despite a lack of public interest or support for abortion on demand”.

Carphone Warehouse was strongly criticised for creating the perception that it was supportive of the push to legalise abortion in Ireland.

However, the website www.wereprochoice.com is now re-directing to the customary Carphone Warehouse site, and the ‘We’re Pro-Choice’ logo has been scrubbed from the adverts and replaced with ‘Your Choice’.

Ms Ui Bhriain said that activists had shown the power of pro-life consumers who would not be ignored.
An action alert from the Life Institute had previously urged:

“We can argue that being for choice is fine, because abortion isn’t about choice, it’s about killing a baby and hurting a mother, but clearly Carphone Warehouse meant the ads to be provocative. And the truth is that the ‘I’m pro-choice’ slogan is used to justify killing babies.

“So, it’s very important that YOU as a pro-life consumer tell Carphone Warehouse what  you think TODAY by email, phone and more”.

Protestors outside Carphone Warehouse said that they wanted to remind the company that the majority of Irish people were pro-life and objected to firms trying to manipulate the electorate or public opinion.