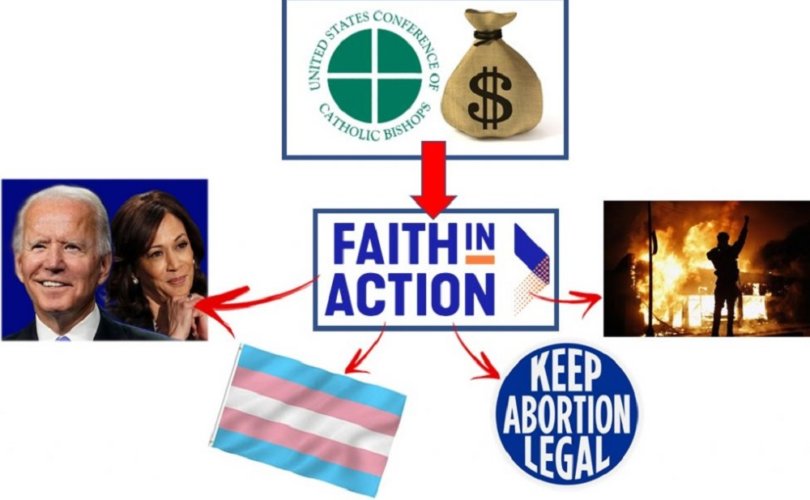 October 23, 2020 (Lepanto Institute) — Last week, the Lepanto Institute published a report showing how the United States Conference of Catholic Bishops (USCCB), through the Catholic Campaign for Human Development (CCHD), is funding a network of community organizers openly committed to helping Joe Biden get elected as the next president of the United States.  The community organizing network, “Faith in Action” (formerly the PICO Network), has forty-nine affiliate members, twenty-nine of which received $1.5 million from pewsitting Catholics last year.  In 2016, the CCHD provided a $500,000 grant directly to PICO/Faith in Action, meaning that the CCHD has funded the national network in recent years and is currently funding more than half of the network’s affiliate members.

Our previous report provided evidence from Faith in Action’s (FIA) own website and social media feeds proving a direct partisan push in favor of Joe Biden and against Donald Trump for the 2020 national election. However, this is not the only problem with the Faith in Action network. While researching FIA’s partisan activity, we also uncovered evidence of FIA promoting abortion, homosexual activism, open rebellion, and the abolition of police while making excuses for rioting and violence.

FIA’s Director of National Policy is “Bishop” Dwayne Royster.  He is also Faith in Action’s Northeast Regional Director, so he represents FIA’s regional and national policy decisions.  On April 1, 2019 Democrat candidates for the 2020 Presidential Election participated in the “We the People Summit.” Royster gave the opening remarks at the summit, kicking off the day’s events.  After being proudly introduced by Planned Parenthood Action Fund’s executive director Kelley Robinson, Royster called for a round of applause for Robinson “for her great leadership,” before proclaiming a revolutionary vision that “women have the right to control the destinies of their own bodies” and work for “all the issues and all the people that are represented in this room in the intersection of all our demands…women’s rights and worker’s rights, racial justice and reproductive justice!”  So, not only is FIA’s National Policy Director opening a partisan political event, calling for “victory in November,” but he specifically and directly endorsed the Democrat’s pro-abortion agenda.  Here is a clip from the conference showing Royster being introduced, and his subsequent opening remarks:

Royster’s nonchalant attitude toward the direct and intentional killing of preborn babies extends to FIA as a whole. For instance, FIA’s Live Free project issued the following re-tweets as this report was drafted (NOTE: Because you can’t post a direct link to a “retweet” that doesn’t go to the original tweet, in order to find the retweet, you’ll have to scan the timeline for the date indicated in the image below):

Live Free’s moral compass is entirely skewed as can be seen by its re-tweet of a “get out the vote” video featuring highly suggestive posing of nearly-nude Atlanta based strippers. Again, we must ask if this is really what the US Bishops intended to fund with the 1.5 million going to this network!  WARNING!  This video is very graphic!  Sadly, it is necessary to post it as is to prove what is being promoted by organizations receiving Catholic funding:

[LifeSite has elected not to embed the video. Readers who feel the need to watch it can do so at this article's original location, here.]

In August of 2020, FIA’s national Live Free project promoted a 4-day online festival called Into Action.  Live Free was also identified as one of Into Action’s “Community Partners” for the event. Live Free’s Facebook posts promoting this event demonstrate that FIA knew what sort of topics this event was going to cover, including the promotion of homosexual activism and abortion “reproductive justice.”

This video posted on Aug 18 by Live Free states “my body, my business” giving a strong idea what will be covered by Into Action (also note the light up “pro-choice” purse in the background):

The actual Into Action videos, each of which clearly identifies FIA’s project, Live Free as a “community partner,” were filled with LGBT and transgender activism, as well as the promotion of abortion.

The clips which follow (taken from the full video, here) present a small sample representing the depraved nature of the entire event.  You will see the moderator introduce the president of the Trans Latina Coalition, Bamby Salcero, who opens by speaking in Spanish and then explains that it was a “customary thing he does to honor [his] higher power.”  He then claims that the Trump administration is attempting to “erase” transgenders and says that his organization is suing the Trump administration.  This clip is followed by a brief statement from Dolores Huerta, a strident pro-abortion activist.  Huerta talks about the importance of “cross-sectionality” between the immigrant rights movement, the workers movement, the LGBT movement, and the pro-abortion movement.

Into Action also produced a video for International Youth Day that featured heavy amounts of transgenderism (click here to see the full video).  Featured in these video clips is an interview with transgender activist, Alok Vaid-Menon, and a transgender skateboard professional called Cher Strawberry.

In this series of clips, you’ll see Alok states that gender boils down to “my body my choice,” and the claims that the idea that there are two genders is “a harmful myth.”  You’ll also see Cher Strawberry attempt to normalize queer and transgender activities for youth by presenting as a popular pro-skateboarder who also happens to be a transgender activist.

Bear in mind as you watch these clips that the Live Free is a project of a network receiving large amounts of funding from the US Bishops.

The promotion of homosexualism is not just confined to the national level. On July 1 of this year, FIA member Inland Congregations United for Change (ICUC) posted on Facebook an image of its logo superimposed on a rainbow flag, stating, “As Pride Month comes to a close, we would like to let all our LGBTQIA+ community know ICUC stands with you 365 days a year in the fight for equality.”  ICUC received $75,000 from the CCHD for 2019-2020.

Speaking of ICUC, this organization not only supports homosexual activism, it also openly condones violence and the destruction of public property.

In this May 30th Facebook post, ICUC reposted Pico California co-director Rev. Ben McBride’s comparison of rioters burning of the Minneapolis police headquarters to the burning bush witnessed by Moses.  ICUC and McBride suggest that the burning bush and the burning building are both calls from God to “go confront Empire.”

Do the US Bishops REALLY want to be sponsoring a group that thinks that God calls us through such violent acts as this?

Another FIA member promoting violent revolution is $25,000 CCHD grantee, Faith in the Valley San Joaquin.  On May 28, Faith in the Valley posted Rev. Ben McBride’s video presentation against the police.  In the video, McBride excused the burning of private property – like a Target store in Minneapolis – calling such acts “not rioting, but rebellion.”  He also stated that FIA’s effort to defund the police called “Bring the Heat” is ultimately concerned with abolishing the police altogether.

NOTE: This video was still available prior to the publication of our first report, but has since been deleted by both Faith in the Valley and Ben McBride.  But the Lepanto Institute saved the entire video before publishing, knowing that the evidence would soon start disappearing once we published our first report.  To view the complete video, click here.

What follows is a condensed version of the full video, showing Ben McBride using a racial slur, calling the US government the “Jewnited States government” while quoting the anti-semite Farrakhan saying he doesn’t have to follow the rules of the United States.  You’ll also see McBride promoting actual rebellion and the burning of retail stores; calling Trump a “totalitarian” who is starting a police state; calling for a race war; admitting that their aim is to completely abolish the police; calls burning down buildings a “tactical action against white racists”; calls the USA a “wicked empire”; calls the Republican party a “racist system” and that they “say they are pro-life but they want to control women’s bodies, they just want people born so they can rape them.”

This echoes Ben McBride’s own twitter posts on the matter.  On May 20, he retweeted a call to “stop using the term ‘riot’ to describe the current actions in MN. These are REBELLIONS.”  To this, Ben McBride added, “Yes, it is REBELLION!”  Given this very clear and open statement, there can be no doubt that the CCHD is funding actual calls for rebellion against the United States.

In this tweet from May 27, Ben McBride – again, the Director for PICO California – said, “Stop telling Black people to be peaceful.”

In this tweet from May 28, PICO California Director Ben McBride referred to buildings set on fire by arsonists as “burning bushes” with the hashtag “BringTheHEAT.  He suggested that the fires spoke to the people about “oppression” and called “out for justice.”

Again, on May 29, PICO California Director Ben McBride appeared to be egging on arsonists by posting a photo of arson and calling the burning building “Burning Bushes,” presenting the hashtag #BringTheHEAT.

All of this coincides with Faith in Action’s member organizations and the Live Free project’s calls to either defund or abolish the police.  The examples we have collected are too numerous to post all of them, but here are some samples:

On August 21, Faith in Actions’ Live Free Project tweeted a call to “Defund the Police.”  Keep in mind that Ben McBride, the brother of the director of the Live Free project, Michael McBride, explained on video that defunding the police was a step toward abolition.

After the presidential debate on September 29, where President Trump mentioned the support he has from police departments across the country, Faith in Action tweeted, “Defund the police.”

On October 7, the Live Free project quoted PICO California’s director, Ben McBride, who called for the abolition of police.

Faith in Action is a hard-left, pro-abortion, pro-violent-revolution, transgender-promoting, organization that is clearly committed to help Joe Biden get elected in November.  And the majority of its affiliates are receiving CCHD funds.

This is all direct proof from FIA’s own websites and social media feeds that it has NO intention of following CCHD’s poorly enforced guidelines. This entire network must be defunded immediately and the CCHD must be held to account for its continued slipshod and absolutely faithless handling of Catholic money.

Please contact your bishop and the CCHD, telling them what you think about the CCHD funding members of Faith in Action!