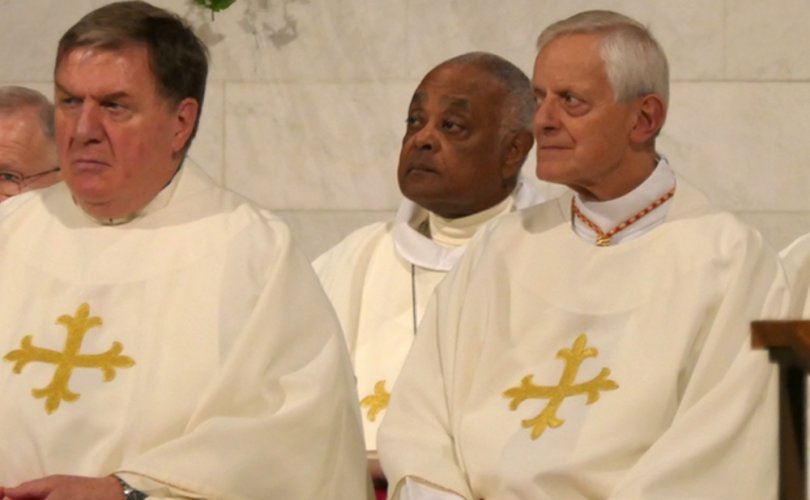 July 12, 2018 (LifeSiteNews) – As the 300 Catholic Bishops of the United States met in mid-June for their annual meeting, it is hard to imagine many of them didn’t know the big reveal coming less than a week later. For decades, it appears, there was cover up of sexual abuse by one of the most prominent American churchmen of the 20th century.

If some did know, they orchestrated a PR triple play that deserves to go down in the annals of American history.

In a media coup that beggars belief, the bishops in the know managed to have the mainstream media not only looking the other way but in fact cheering them on while at the same time one of the most serious revelations of sexual abuse by one of their senior members garnered little notice.

Several bishops were feted in the media for issuing statements slamming President Trump’s tougher standards at the border as “immoral” and calling it a “right to life” issue. One bishop went so far as to suggest excommunication for Catholic border guards involved in implementing Trump’s immigration policy.

As the media rejoicing over the bishops’ liberal stance on immigration continued, press releases appeared from four dioceses and the USCCB all mentioning the findings of “credible and substantiated” claims of sexual abuse of a minor at the hands of 87-year-old retired Washington Cardinal Theodore McCarrick. The event in question took place nearly 50 years ago, and in his statement McCarrick claimed “absolutely no recollection of this reported abuse” and professed innocence.

While the dioceses refused to reveal the nature of the abuse of the minor, the victim’s lawyer Patrick Noaker revealed his client was a sixteen-year old-altar boy at the time of the incidents. An investigation led by New York Cardinal Timothy Dolan substantiated the charges that McCarrick stuck his hands down the boy’s pants and fondled him on two separate occasions.

But the real story isn’t the newly-substantiated abuse of a minor. The real story is the fact that there was more sexual abuse by Cardinal McCarrick – and a good number in the hierarchy knew about and concealed it for decades while the celebrated predator Cardinal hobnobbed with D.C.’s rich and famous.

A cover up can still be seen in the main press release of Washington Cardinal Donald Wuerl. His release and that of his archdiocese use confusing language to hoodwink the public into believing only this ancient incident is in question. Wuerl says he requested a review similar to that of New York’s of the Washington diocese records.

“Based on that review, I can report that no claim – credible or otherwise – has been made against Cardinal McCarrick during his time here in Washington,” says Wuerl.

The problem is that the review focused only on abuse of minors and also was only about McCarrick during his time in Washington. Did the Archdiocese receive claims against McCarrick that involved his time before he arrived in Washington? Any while he was outside the country? Any warnings to protect seminarians or youth?

I asked Cardinal Wuerl’s office all those questions days ago and called them to follow up, but they gave me no answer.

However, the releases by the Archbishop of Newark Cardinal Joseph Tobin and the Bishop of Metuchen James Checchio were more forthcoming. They revealed that there had indeed been other sexual abuse complaints made against McCarrick while he headed those dioceses from 1981-2000.

There were “three allegations of sexual misconduct with adults,” they reveal, and “two of these allegations resulted in settlements.”

So bishops knew for decades that Cardinal McCarrick was a sexual abuser but remained silent. The clergy abuse crisis has taught us that it is just that kind of silence which is responsible for sexual abuse of minors and many young adults at the hands of clergy who betray everything for which the Catholic faith stands.

Reports which gained prominence in recent days suggest McCarrick was an abuser of seminarians. For seminarians, who would have looked to McCarrick as their spiritual father, the sexual abuse would take on an incestuous, even demonic nature.

While I was Adjunct Professor at a Pontifical Seminary, St. Mary’s Baltimore (1972-1984) a number of seminarians came to me with concerns about the behavior of Theodore E. McCarrick, then bishop of Metuchen, New Jersey. It has been widely known for several decades that Bishop/Archbishop now Cardinal Theodore E. McCarrick took seminarians and young priests to a shore home in New Jersey, sites in New York, and other places and slept with some of them. He established a coterie of young seminarians and priests that he encouraged to call him “Uncle Ted.”

Oh, and if you’re still cheering on those bishops pushing increased migration and going so far as to couch it in the traditional anti-abortion language of the “right to life,” you may want to think twice. The motives there might be mixed. The bishops receive tens of millions of dollars from the government for migrant services. As attorney and international child rights advocate Elizabeth Yore told me once, “migration pays very well, pro-life pays nothing.”