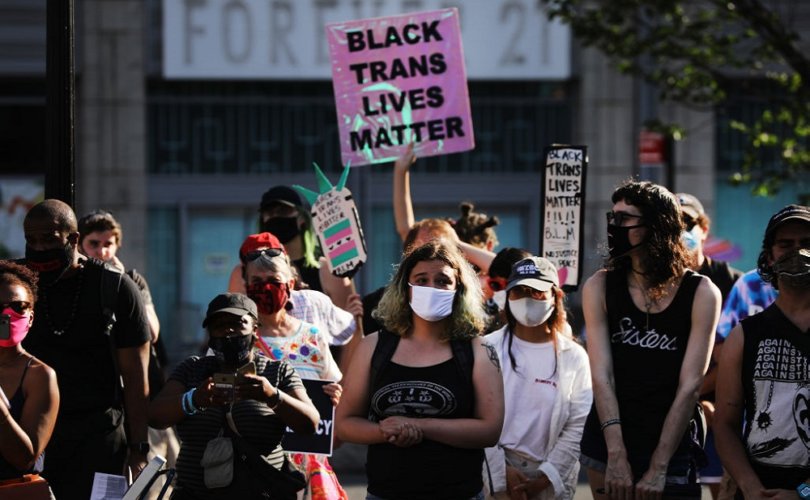 July 17, 2020 (Crisis) — The first step on the way to solving a problem is to understand what the problem is. Consequently, we can’t look to America’s bishops to offer solutions to our nation’s most pressing problem because most of them simply don’t get it.

The biggest problem we currently face is an attempt to overthrow our country’s system of government. In the words of one Black Lives Matter leader, we “should burn down this system and replace it.” Replace it with what? Well, nobody knows for sure. But judging by the fact that leftists, Marxists, anarchists, and nihilists are heavily involved in the movement, the “replacement” society won’t be a pleasant one.

It’s not only the United States that the protesters wish to take down, but also the Western Christian tradition upon which American society was built. Shaun King, a far-left activist and Black Lives Matter supporter with a large following, tweeted that “all murals and stained-glass windows of white Jesus, and his European mother, and their white friends should also come down. They are a gross form of white supremacy. Created as tools of oppression. Racist propaganda.” So beneath the “black lives matter” hype, the main agenda is still, “Hey! Hey! Ho! Ho! Western civ has got to go!”

But apparently many bishops haven’t been paying attention. They seem to believe that the current crisis is all about racism. They seem to think that if only we can overcome the sin of racism, the nation will heal. To them it’s the sixties all over again and this is their chance to show their solidarity with the civil rights marchers of yore. Only, the current protests aren’t led by people whose primary interest is ensuring civil rights — but, rather, by people who want to bring down the system that guarantees civil rights.

The numerous statements about racism that appeared on the USCCB website in the wake of George Floyd’s death were careful to note that the majority of police are good men and women, and that violent protests are self-defeating. Nevertheless, all the statements assumed that eliminating racism (that is, white racism) was the major motivating force behind the nationwide protests and rioting. Some of the statements even echoed the “structural racism” and “systemic racism” themes that had become major talking points on the media.

Some bishops have gone even farther and declared their solidarity with Black Lives Matter. Perhaps they don’t realize that BLM is, among other things, a pro-abortion organization that is unconcerned about the lives of unborn black children. BLM is also pro-LGBT, anti-Semitic, and anti-family. The BLM online manifesto opposes the “Western-prescribed nuclear family structure” and seeks to free “ourselves from the tight grip of heteronormative thinking.” What else? Oh yes, BLM was founded by avowed Marxists. In short, BLM is not the kind of organization that Catholic prelates ought to pledge allegiance to. Whatever some ill-informed bishops might think, BLM should not be confused with the Civil Rights movement led by Dr. King in the Sixties.

Nevertheless, Baltimore Archbishop William Lori recently hired BLM supporter Howard Ross as a consultant to help him “grapple with racial tension” in the city. That’s like hiring the Amalgamated Union of Flamethrowers to help with the city’s arson problem. There is, however, always hope. Archbishop Lori announced the hire on June 5th. Now that a month has passed, and more has been revealed about the BLM movement, he may have second thoughts.

But don’t count on it. Bishops, both in the U.S. and Europe, have shown a propensity for chasing after red herrings while ignoring the real culprits. They’ve convinced themselves that “Islamophobes” are a greater danger than Islamic terrorists, that white nationalists are a greater threat than black-clad Antifas, and that clericalists rather than homosexualists are to blame for the sex-abuse crisis.

So, it’s not surprising that the bishops would once again be thrown off the scent, mistaking a radical leftism problem for a racism problem. There is, of course, a racism component to the problem. But much of that is manufactured racism — a deliberate attempt by leftists, academics, and the media (e.g., The New York Times’ “1619 Project”) to create the impression that racism is far more pervasive and far deeper than it really is.

This will be asking a lot of them because, by and large, the bishops see no enemy on the left. It sometimes seems as though the last bishop who worried about the threat from Marxism was Fulton Sheen. There are signs, though, that some bishops are beginning to realize that the left is not their friend. Archbishop Thomas Wenski, the Chairman of the USCCB’s Religious Liberty Committee, recently spoke of the rising intolerance toward Christians in terms of a “soft despotism.”

But part of that soft despotism is a form of mind control to which many of the bishops themselves have succumbed. The thought control is quite a bit more subtle than the kind portrayed in 1984 because giant tech, media, academic, and financial institutions have put themselves at the service of the leftist cultural revolution.

So, while the nation is being turned into a giant electronic re-education camp, Catholic leaders along with Catholic laymen are focused not on the threat from leftist totalitarians, but on the possibility that they may unconsciously harbor some trace of “implicit bias.” Thus, Rob McCann, the CEO of Catholic Charities of Eastern Washington, confessed to the global commune:

I am a racist… My Catholic Church, and my Catholic Charities organization, is racist. How could they not be? Our Catholic faith tradition is built on the premise that a baby, born in a manger in the Middle East, was a white baby.

Since logic itself is now considered to be a white supremacist ploy, we can ignore Mr. McCann’s faulty logic. We can also admit that racism is still around, and that, in fact it seems to be making a comeback. But the reality of the new racism is much more complex than Mr. McCann supposes.

Like other liberal Catholics, he is forever focused on the racism of the past — that is, white racism against blacks. Indeed, some liberals subscribe to the juvenile notion that only whites can be racists. But, of course, that is not the case. For example, Yusra Khogali, a Toronto-based BLM leader, has said that “white people are genetic defects.” And Nation of Islam leader Louis Farrakhan thinks that white people are the result of a science experiment gone wrong.

As Dr. Carol M. Swain — a former professor at Vanderbilt University, and a black woman — puts it: “If there is systematic racism today, it is racism against white people, in the sense that white people are held responsible for all the evils in the world.” Many blacks subscribe to this anti-white racism, but so also do many whites. By denouncing the white race, they prove their virtue and their wokeness.

Whether or not there is more anti-white racism than anti-black racism is beside the point. The point is that the protests over the death of George Floyd were quickly hijacked by people who see the toppling of statues as a prelude to the toppling of America.

Black Lives Matter is not primarily a black movement, it’s a Red movement — “Red” as in “Reds,” communists, leftists, and Marxists. As Dr. Swain observed: “It’s very clear to me that the Black Lives Matter organization is about something bigger than black people, that it really is pushing a socialist, Marxist agenda.”

In other words, BLM’s primary allegiance is to Marxism. It is therefore quite willing to sacrifice black lives for the higher communist cause. BLM’s agenda of eventually abolishing the police and the nuclear family will, of course, do nothing but harm to black people. The recent spike in crime and violence in big city black neighborhoods resulting from police defunding and disengagement gives us a preview of what will happen should the BLM movement ever achieve its goals.

That’s the bad news. The good news is that some bishops are taking a more sensible and less simplistic view of race in America. CNA reports that in response to Rob McCann’s off-the-rails confession of racism, the Bishop of Spokane, Thomas Daly, called McCann in for a talk and then issued a statement. It read in part:

His [McCann’s] support of the Black Lives Matter organization (BLM), albeit now modified, puzzles me. BLM is in conflict with Church teaching regarding marriage, family, and the sanctity of life. Moreover, it is disturbing that BLM has not vocally condemned the recent violence that has torn apart so many cities. Its silence has not gone unheard. One need not stand with BLM to stand for black lives.

Let us hope that more bishops will adopt this more realistic view of BLM. Let’s also hope that they begin to see the Red behind the Black façade.

This article originally appeared in the July 14, 2020 edition of Crisis. It is published here with permission from William Kilpatrick. For more of Dr. Kilpatrick's recent articles, visit his website, turningpointproject.com.