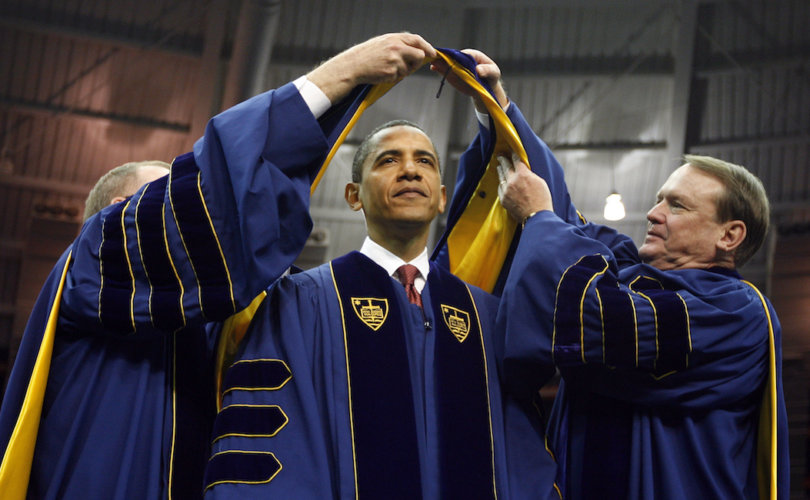 May 23, 2017 (Priests for Life) — It has become so commonplace to hear about Catholic universities inviting pro-abortion speakers or just speakers with progressive agendas so far beyond the scope of a Catholic teaching that it is nothing short of scandal. Sadly, we have come to a place where we might be expecting too much when we expect that Catholic universities will behave, well, in a Catholic manner.

The University of Notre Dame certainly was not acting Catholic in 2009, when it invited then-President Obama, the most pro-abortion president the U.S. has ever elected, to speak at commencement exercises. At that time, Priests for Life’s Father Frank Pavone led an alternate ceremony for pro-life students on the campus. This past weekend, about 100 students walked out of their own graduation ceremonies at Notre Dame when Vice President Mike Pence began to speak, and university officials assured them there would be no consequences for their disrespect. I found myself wondering how their parents felt.

As a Catholic parent with two daughters in college and three in private Christian school, we are making many sacrifices. We often find ourselves juggling bills or postponing house repairs because their Christian education is the most important thing to us. I don’t mean education in the narrow sense, either. We know we can instruct them in doctrine; we sacrifice to surround them with a Christian culture, since they spend most of their waking moments surrounded by peers and teachers.

Many parents fear that kids lose their faith in college. We hear it all the time. They are swayed by hip progressive ideals that run contrary to Christianity and the strong push to fit in. I believe that’s why parents are taking out loans to send their children to private religious institutions. They want to combat this trend.

So, to have the very school into which they’re pouring money then turn around and discard those Christian values by having a pro-abortion sympathizer, for example, be honored by that institution, is such an insult. Instead of reinforcing, it chips away pro-life attitudes and worldviews that we work so hard to build. We spend the first 18 years of our children’s lives forming them into strong moral Christians with a foundation based on righteousness and truth, only to have to worry that it might be undone in — of all places — Catholic institutions.

What’s going on? When did Catholic universities start treating abortion as just a concept, and failing to be moved by it as a massive holocaust? Some will argue that inviting those with different views takes nothing away from the pro-life message. Wrong! Being pro-life is not just about “believing the message,” but about acting consistently with it and not cooperating in the killing of children. I have often said that our culture has stopped feeling abortion. There’s no longer a sense of urgency. It is not alarmism or exaggeration to say that abortion is a holocaust against the children in the womb, and Catholic institutions are inviting speakers who are cooperating actively in that holocaust.

We can no longer take at face value the word “Catholic” tagged on to university name. It is naïve to do so. According to the Association of Catholic Colleges and Universities, as of June 2016, “the National Center for Education Statistics IPEDS database shows that there are a total of 261 Catholic institutions of higher education in the United States.” How pitiful is it that out of those 261, approximately only 17 of those made it on the Cardinal Newman list of authentically Catholic colleges!

Some Catholic families have turned to Protestant institutions because they reflect their orthodoxy and Christian culture more closely than the Catholic institutions do. The U.S. Catholic bishops have exhorted Catholic colleges not invite speakers who openly oppose Catholic values. (See their statement Catholics in Political Life.) When those same colleges openly act contrary to such exhortations, one has to wonder who or what has taken over these institutions. There is no shortage of good orthodox speakers, so to whom are they pandering?

The ministry for which I work — Priests for Life — has constantly reinforced what has long been my own personal conviction, that we will indeed overcome the holocaust of abortion. The Church has a key role to play in leading the world out of the culture of death. But progress will be far slower than it needs to be if the Church gives aid and comfort to proponents of that culture of death. It is, indeed, time to choose. We often speak of how God unites us, but He also divides. He divides light from darkness, truth from falsehood, sheep from goats and good from evil. They don't mix, and they shouldn't pretend to mix, especially in Catholic institutions!