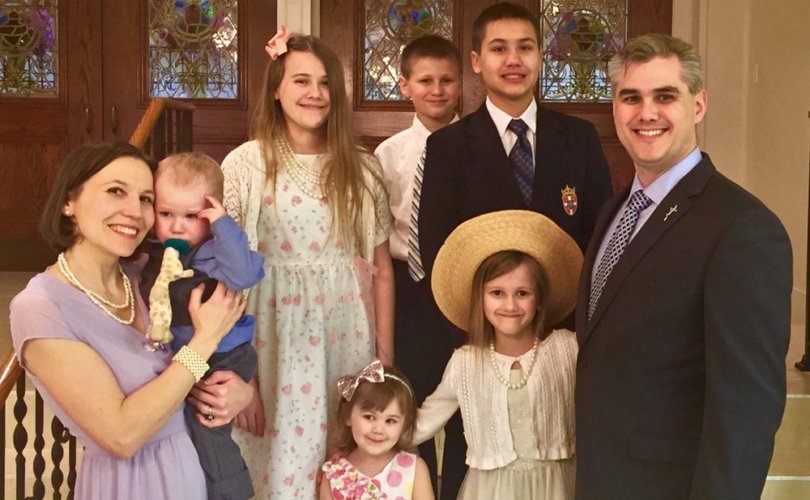 May 24, 2018 (LifeSiteNews) – I’ve been asked to give a few words, giving personal witness to the gift of Truth, Love, and Life.

It’s difficult to place nearly 16 years of marriage into a capsule as testimony to these things, but as I have reflected on my own marriage in light of the teachings of Holy Mother Church, one thing has become abundantly clear: The very essence of marriage is a reflection of the Holy Trinity through Divine Sacrificial Love.

It has taken me a long time to discover, understand and live by what my wife has personified from the very beginning of our marriage. True Love, which is the total giving of self to another without regard to the self, requires perpetual sacrifice.

While there are many different examples of a spirit of sacrifice … and a spirit of selfishness … that come and go through all marriages, there are two instances that stand out in my mind the most.

Yesterday, our 7-year-old daughter … the fourth of six children … Tatiana, received her first Holy Communion.  I couldn’t be with her, obviously, but my heart was filled with a mixture of joy and gratitude by the pictures my wife sent to me.  Joy, because of the beauty that comes with providing Our Lord with a pure, new bride.  Gratitude because of the circumstances regarding her birth.

Seven years ago, just a mere 36 hours after Tatiana was born, my wife awakened me by crying out with intense pain.  What I thought was an intense bout of postpartum cramps turned out to a ruptured aneurysm in her kidney.  After staying up with her throughout the night, the midwives visited in the morning and told me that I had to get her to the hospital right away.  When we got to the hospital, the triage nurse couldn’t register any blood pressure.  And while the doctors wheeled her away for an MRI, I got on the phone and called for a priest.

Throughout what would be the most terrifying day of my life, nothing went right, and in fact, went from bad to worse.  At about 3:00 in the afternoon … the Hour of Mercy … the first attempt to clam off the artery resulted in a vascular spasm, and the doctors became concerned that it resulted in arterial damage that would require them to amputate my wife’s leg.

It was at this time that I knew that the situation was entirely out of my hands.  There was nothing I could do to fix this, and the very real possibility of having to go home to tell our other three kids that mommy was never coming home again pressed intensely on my heart.

But this is where I discovered what a marriage is made of.

I was alone, and with nowhere to turn, I fell to my knees and I prayed as Our Lord did in Gethsemane.  I told Our Lord that I wanted my wife to live, but I had to be willing to let her go, if it was God’s wish.  I said, “Lord, you know that I desire my wife to live.  I beg you for her life.  But I desire Your Will above all else.  Even at the great cost of losing my wife, I give myself entirely over to Your Divine Will.”

Obviously, this story has a happy ending … in fact, despite the emergency surgery to remove her right kidney, the doctors were amazed at the speed of my wife’s recovery.  After receiving 14 units of blood and having gone through the trauma of an emergency nephrectomy, she was expected to remain in the hospital for 2 weeks, but went home after only 5 days.

4 years ago, our fifth child, Maria Faustina, was born.  When Maria was four months old, my wife and I took her with us on our very first trip to Rome.  Taking in the glory, beauty, and history of the Eternal City, we grew in awe as we went from church to church.  By a happy accident, we happened to enter into Santa Maria Sopra Minerva on the feast of St. Catherine of Siena.  The back of the altar was opened so pilgrims could actually touch the tomb of St. Catherine.

Kneeling in prayer, my wife and I placed our wedding rings on the tomb, we prayed for a strengthening of our marriage, and then we held our four-month-old daughter to the tomb as well.  Afterward, my wife told me that what she prayed was this … she prayed to Our Lord for her willingness to give our children entirely to Him, whenever and in whatever capacity He may will.  It was a beautiful prayer that I then shared with her, and then didn’t give another thought.

The very next day, she went to the Wednesday papal audience with our daughter while I was in a meeting.  As it was customary for the pope to ride around among those present for the audience, the crowd pressed past her, and while she was juggling both the baby and her phone, trying to take a picture, the lady next to her gestured that she would hold the baby.

So, my wife handed her our daughter to the person in front of her, who passed the baby to the person in front of them, and on to the security detail surrounding the pope, who then passed her right up to the pope himself.  He held our daughter, blessed her.  Gave her a kiss, and then Maria Faustina was passed back down to my wife.  In an amazing way, Our Lord has answered my wife’s prayer … He took our daughter from her hands, and then returned her with a blessing.  As Scripture is very clear, Our Lord will not be outdone in generosity.

All marriages are called to live a sacrificial love.

As I was listening to Bishop Schneider speak at the Rome Life Forum last week, I was struck by the thought of the Holy Family being a reflection of the Trinity. God the Father is reflected in the image of St. Joseph. Our Lady represents her spouse, the Holy Spirit. And, Our Blessed Lord, Who has two natures, one Divine and one Human, is the bridge between the Trinity and the Holy Family.

In the Holy Family, we find the model for all families.  All husbands are called to be the head of the family, representing God the Father to his wife and children, providing the law and right judgment.  All mothers are called to follow the example of Our Lady, dispensing the goods of the home as Our Lady dispenses the Graces of the Holy Spirit.  And all children are to follow the example of Our Blessed Lord, who, St. Luke tells us, was subject to … or obedient to … his parents.

The last mention of St. Joseph in the Gospel of St. Luke is made when Jesus disappeared from his parents for a period of three days. After that, we have no other mention of St. Joseph, and when Our Lord begins His public ministry, He is with Mary, but Joseph is not around. Venerable Mary of Agrida tells us that “Love was then the real cause of the death of Saint Joseph,” and according to Sister Mary Ephrem Neuzel, as part of the revelations of Our Lady of America, St. Joseph said:

My heart suffered with the Hearts of Jesus and Mary. Mine was a silent suffering, for it was my special vocation to hide and shield, as long as God willed, the Virgin Mother and Son from the malice and hatred of men.

The most painful of my sorrows was that I knew beforehand of their passion, yet would not be there to console them.

Venerable Mary of Agrida indicated that St. Joseph was thirty-three when he was espoused to the Blessed Virgin, lived with Her a little longer than twenty-seven years as her husband, and died at the age of sixty. If this is the case, then St. Joseph died just about three years prior to Our Lord’s public ministry.

What’s interesting is that Mark 15:33-34 indicates a period of three hours that the world was in darkness, at the end of which, Our Lord cried out, “My God, my God, why hast thou forsaken me?” If we think about the three years of St. Joseph’s death as a reflection of the three hours of God the Father being mystically shrouded from the Human Nature of the Son, we can also consider how the Father participated in the suffering of the Son.

Imagine the immense pain it would be for any husband and father to know that his family would endure the worst kind of suffering imaginable, and not be there to help, console, or die with them. Given the unity of the Blessed Trinity, the intimate participation of the Father in the Passion of the Son can be contemplated in the death of St. Joseph.

And just as Our Lady — whose Heart was pierced by a sword — is the Spouse of the Holy Spirit so, too the Holy Spirit would have shared in the same piercing wound in this Triune expression of Sacrificial Love.

In physical parenthood, married couples bring new lives into the world.  In spiritual parenthood, individuals bring souls to our Lord through prayer, sacrifice and witness to the Truth.  And because all of us are called to bear fruit in one of these two ways, we are likewise all called to be spouses … spouses to either a bride or groom or spouses to the Church and our Lord.