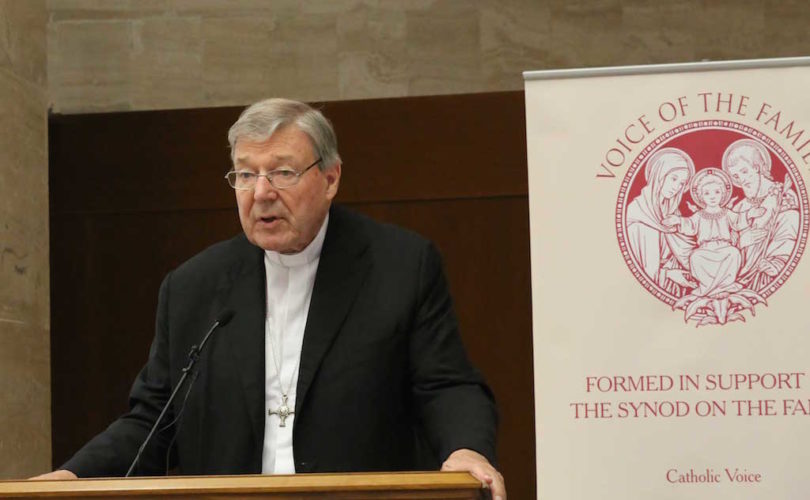 ROME, October 2, 2015 (LifeSiteNews) – Our Voice of the Family team here in Rome for the Family Synod attended a lecture today from Cardinal Pell at the Angelicum, “Living the Truth in Love”, an international conference and resource event to address pastoral approaches toward men and women with homosexual tendencies.

In a powerful, compassionate, address, His Eminence said:

“Too little is known about the Church's teaching on homosexuality*“.

“Homosexuality refers to relations between men or between women who experience an exclusive or predominant sexual attraction toward persons of the same sex. It has taken a great variety of forms through the centuries and in different cultures. Its psychological genesis remains largely unexplained. Basing itself on Sacred Scripture, which presents homosexual acts as acts of grave depravity, tradition has always declared that 'homosexual acts are intrinsically disordered.' They are contrary to the natural law. They close the sexual act to the gift of life. They do not proceed from a genuine affective and sexual complementarity. Under no circumstances can they be approved.”

Cardinal Pell emphasised that the Church's teaching doesn't end there and going on to paragraphs 2358 and 2359 from the Catechism. His Eminence said:

“2358 The number of men and women who have deep-seated hfomosexual tendencies is not negligible. This inclination, which is objectively disordered, constitutes for most of them a trial. They must be accepted with respect, compassion, and sensitivity. Every sign of unjust discrimination in their regard should be avoided. These persons are called to fulfill God's will in their lives and, if they are Christians, to unite to the sacrifice of the Lord's Cross the difficulties they may encounter from their condition. 2359 Homosexual persons are called to chastity. By the virtues of self-mastery that teach them inner freedom, at times by the support of disinterested friendship, by prayer and sacramental grace, they can and should gradually and resolutely approach Christian perfection.”

Cardinal Pell concluded that for people to say these things (i.e. Catholic doctrine) nowadays is tantamount to “societal heresy” but the Church must continue say it.

*Why is the Catholic Church's teaching on sexual ethics important specifically for the pro-life movement? The late Pope John Paul II, the great pro-life champion, taught in no. 97 of his 1995 encyclical Evangelium Vitae that it is an illusion to think that we can build a true culture of human life if we do not offer adolescents and young adults an authentic education in sexuality, and in love, and the whole of life according to their true meaning and in their close interconnection.