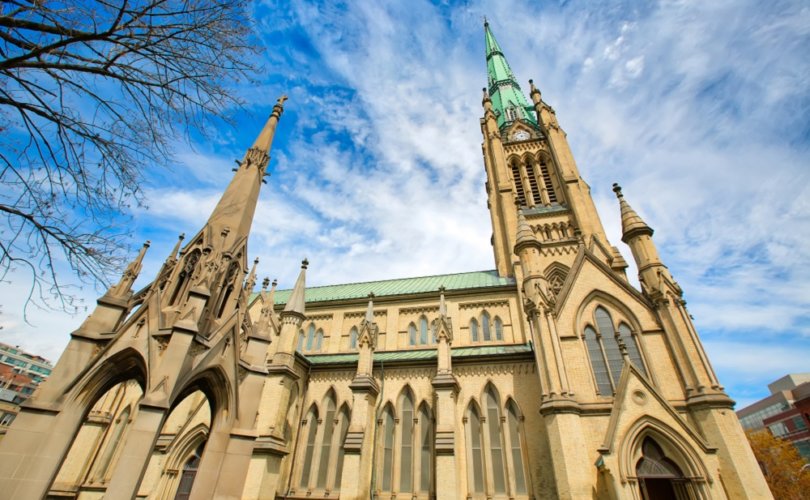 February 5, 2021 (Everyday For Life Canada) — In Canada, Catholic education historically has often been a contentious issue. Catholic parents in the past strongly defended the choice to send their children to Catholic schools. In fact, the 1867 Constitution of Canada recognizes the existence of separate schools. Catholics have a denominational right to Catholic education. However, in modern times there has been an aggressive continued push to have one public school system. Presently, the situation at the Toronto Catholic District School Board (TCDSB) has reached a crisis.

Less than half of the provinces and territories currently fund Catholic schools. In 1997, a referendum ended the denominational school system in Newfoundland and Labrador. In Ontario, the secular changes have come from legislation, policies and regulations, as well as Ontario's Human Rights Code (OHRC). So, the question that remains is this: can Catholic education in the province be saved?

In recent years, there has been much progressive accommodation in Catholic schools. It has led to confusion and the undermining of the Catechism of the Catholic Church, Catholic doctrine and Bible teaching, on matters of the person, sexuality, marriage and family. Last year, the TCDSB changed its Code of Conduct to include gender identity and expression. A number of Catholic schools have established gay/straight student clubs without parental permission. At a board meeting of the TCDSB, one speaker was censored from quoting a paragraph from the Catechism about the teaching on homosexuality. The citation was described as “dangerous.” Welcome to Catholic education today.

Just weeks ago, the director of education of the TCDSB, Brendan Browne, sat through a trustee board meeting totally in support of an online resource, called Youthline. Apparently, he doesn't see a problem with students having access to explicit and graphic sexual content. In fact, Browne and the trustees made the case as to why the adult resource needs to be available to students, who are minors, on the board website.

Catholic education is protected by denominational rights in Canada's Constitution, but too many Catholic leaders like Browne no longer defend that right. Why? They believe that Canada has evolved (the Obama verbal sleight of hand) and the OHRC presently overrules Church teaching. This helps to explain why every Catholic school board in the province, all 29 of them, have recognized gender identity, gender expression, and have an aggressive equity plan to supposedly better serve the expanding list of lgbtq2 students.

Catholic education has slowly eroded over the decades and the Catechism, when not overlooked, is undermined or no longer found to be relevant. Parents should not be surprised that Catholic educators and trustees no longer feel responsible to believe and instruct what the text teaches. People of a generation or two ago would not recognize Catholic schools today with its strong focus on comprehensive sex-“education,” critical race theory and social justice issues. At best, the schools have become faith lite. There's a serious moral crisis in Catholic schools.

We are facing a pandemic. We have a stay-at-home order in Ontario. Schools are closed and most of the economy is shut down. Parents and students are suffering. Families are trying to cope with all-day on-line learning. This is causing much anxiety and even depression. And what's the priority at the TCDSB? Student learning? Students' safety? No, these aren't the issues on the agenda of the day. It's making sure lgtbq+ resources are available to students. In fact, the TCDSB director Brendan Browne just sent a letter to all superintendents and trustees making sure they're pushing the same sexual agenda. Browne writes:

The TCDSB strives to create equitable and inclusive learning environments and communities founded on Catholic principles of respect, inclusion, fairness, equity, and social justice, in which every person is valued as a child of God. We remain committed to supporting 2SLGBTQ+ youth in our schools and acknowledge there is more to do. As a follow up to our statement issued on January 12, 2021, we would like to provide an update.

Following a meeting between our Superintendent of Equity and YouthLine, the link to YouthLine was re-posted and a LGBTQ+ resource page for students is being developed. We also recognize that staff and students may have access to content from sources outside of the Board and direct partners, which is why we added an external links notice on our webpages. The Board of Trustees approved the establishment of an LGBTQ+ Advisory Committee made up of Trustees, community organizations, parents and students with support from our Equity and Human Rights Advisor and our Equity Department.

We believe this is only the start of meaningful engagement and collaboration to better serve our 2SLGBTQ+ students.

Let's shame the devil and tell the truth. When trustees and the director advance this kind of anti-Catholic teaching, they themselves are no longer Catholic. It's time to examine one's conscience. As a result, “Catholic schools” aren't truly Catholic. Parents should see through the lies masked as inclusion, diversity and caring for at risk students. Equity is not a human right. Gender identity is not Catholic belief. The sexual recognition of dozens of genders is neither a human right nor Catholic teaching.

When Ontario recognized Catholic schools through the Scott Act in 1863, the legislation was passed to stop discrimination against religion. Both Canada's Constitution (Section 93) and the Charter of Rights and Freedoms (Section 29) protect the right Catholics have to separate schools. The woke are now advancing the argument that what was not considered in the past is not applicable today. We don't agree. The truth doesn't change with the progressive narrative of the day. Woke “Catholic” leaders argue that gender ideology and equity education aren't found the Charter or the Constitution because these old documents are in need of updating. How is that done? By implementing the OHRC. So, denominational rights today must be viewed through a “Catholic lens” and be consistent with the OHRC. This an opinion. Nevertheless, this view is being used to radically change Catholic education. We totally disagree because the argument has not been legally tested nor tried politically.

Progressive thinkers want us to believe that Canada's Constitution and the Charter no longer fully apply to Catholic education. This is morally misguided and legally not true. Let those who believe this mount a political challenge to alter the Constitution and the Charter. We argue that the OHRC doesn't supersede denominational rights found in Canada's founding document and maintained in our updated Charter. Separate schools are still protected in law in Ontario. However, this has not stopped governments, activists, teachers and even those running Catholic boards from undermining Catholic education. The woke “Catholics” inside the system and others from outside are working hard to dismantle it. The changes include everything from hiring, teaching, curricula, student enrolment, trustee qualifications and board directors. There is no longer a commitment to being Catholic and following Catholic teaching in order to govern Catholic schools. The new “Bible” and the “Catechism” for the progressives is the OHRC.

Ontario parents face a critical period. This may be the last opportunity to reclaim any real semblance of Catholic education. If “inclusive” changes continue to be made at the present pace, soon there will no longer be Catholic education in Ontario. The schools will be there but in name only. Next week, the TCDSB will decide whether to celebrate once again, June 2021, as pride month and fly the rainbow flag in the schools. A TCDSB committee is presently finding ways to provide more resources for the lgbtq2 students. One superintendent has been given the mission to push white fragility and equity education at full speed. The fact, that none of these trendy politically correct initiatives will make any improvement to the education of the majority of students, is of no concern to the people in charge of Catholic schools these days or the ministry of education. Parents and children are on their own, even when well over 30 billion tax dollars are spent on public education yearly in the province.

Parents need to take action if they want to preserve the great gift of Catholic education. What can parents do? Contact your trustee and speak up. In the next election, make sure the present trustee isn't re-elected if they have not been faithful to Catholic education. Parents must call the Archdiocese of Toronto and ask why Cardinal Thomas Collins has not consistently addressed the TCDSB on these issues or offered guidance to parents. Parents can also look at homeschooling, stop supporting Catholic education with their taxes, and the possibility of taking legal action. In normal times, one would think that the Catholic teachers' union and even teachers themselves would be defending Catholic education. But that's not the case. These aren't normal times. There's a serious risk of losing Catholic education which generations of mothers and fathers, sisters and priests fought hard for and sacrificed much to establish. Catholic education in Canada goes back to 1620 with the opening of the first school in Quebec. We need to pray for Catholic education but also take Catholic action to defend it.

The fact that this short video exposing the dangers of Youthline has not been seen by tens of thousands of people, and parental action taken to demand that school boards remove the adult content, explains much about the decline of Catholic education.

Published with permission from Everyday For Life Canada.