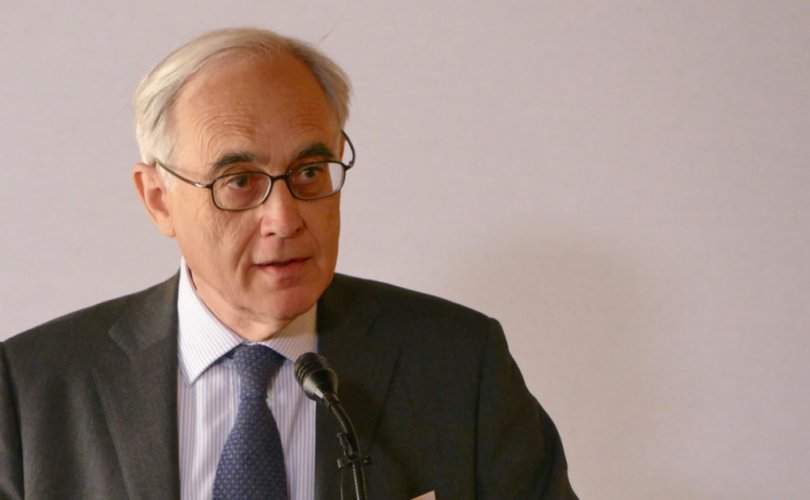 February 8, 2018 (Rorate Caeli) – As the fifth anniversary of Pope Francis’ election draws near, we hear repeatedly that we are facing a dramatic and absolutely unprecedented ‘page’ in the history of the Church. This is only partly true. The Church has always experienced tragic times which have seen the laceration of the Mystical Body since its very beginnings on Calvary right up to the present day.

The younger generations don’t know and the older generations have forgotten how terrible the years that followed the Second Vatican Council were, of which the present age is the result.

Forty years ago while the 1968 revolt was erupting, a group of cardinals and bishops, who were protagonists at the Council, sought to impose a radical change on the Catholic doctrine of marriage. The attempt was frustrated by way of Paul VI’s encyclical Humanae Vitae of July 25th 1968 which reaffirmed the prohibition of artificial contraception, restoring strength and hope to a disorientated flock. However, Paul VI of Humanae Vitae, was also the one who caused a deep rupture with Catholic Tradition in 1969 by imposing the new rite of the Mass which is at the origins of all contemporary liturgical devastations.

On November 18th 1973, the same Pope promoted Ostpolitik, by assuming the grave responsibility of removing Cardinal József Mindszenty (1892-1975) from his office as Archbishop of Esztergom, Primate of Hungary – and champion of Catholic opposition to Communism.  Pope Montini had hoped for the attainment of a historical compromise in Italy, based on the agreement between the Secretary of the Christian Democrats, Aldo Moro and the Secretary of the Communist Party Enrico Berlinguer.  The operation was abruptly interrupted by the kidnapping and killing of Moro in 1978, after which Pope Montini himself died the following August 6th. This 40th anniversary also falls this year.

During those years of betrayal and blood, courageous voices spoke out which we of necessity recall, not only for the record, but because they help us to orient ourselves in the darkness of the present time. We remember two, prior to the explosion of the so-called “Lefebvre Case”, the French Archbishop Monsignor Athanasius Schneider highlighted in a recent interview on his “prophetic mission during an extraordinary dark time of general crisis in the Church.”

The first voice belongs to a French Dominican priest, Father Roger Calmel, who right from the very beginning in 1969 had rejected Paul VI’s Novus Ordo and in June 1971 wrote in the magazineItinéraires:

Our Christian resistance of priests and laity [is] very painful resistance as it forces us to say no to the Pope himself about the modernist manifestation of the Catholic Mass; our respectful but unshakeable resistance is dictated by the principle of total fidelity to the living Church of all time; or, in other words, from the principle of living fidelity to the development of the Church. Never have we thought of holding back, or even less of impeding, what some, with very ambiguous words, for that matter, call “progress” in the Church; we’d call it rather the homogenous growth in doctrinal and liturgical matters, in continuation with Tradition, in sight of the “consummatio sanctorum.”

As Our Lord has revealed to us in parables, and as St. Paul teaches us in his Epistles, we believe that the Church, over the course of the centuries, grows and develops in harmony through a thousand adversities, until the glorious return of Jesus Himself, Her Spouse and Our Lord. Since we are convinced that over the course of centuries a growth of the Church is occurring, and since we are resolute in becoming part of this mysterious and uninterrupted movement as honestly as possible, as far as it is up to us, we reject this supposed progress which refers to Vatican II and which in reality is mortal deviation. Going back to St. Vincent of Lerin’s classical distinction, the more we desire good growth – a splendid “profectus” – even more do we reject, uncompromisingly, a ruinous “pennutatio” and any radical and shameful alteration whatsoever; radical, since it comes from modernism and denies every faith; shameful, since the denial of the modernist sort is shifty and hidden.

The second voice is that of a Brazilian thinker and man of action, Plinio Correa de Oliveira, author of a leaflet of resistance to the Vatican Ostpolitik, which appeared on April 10th 1974 under the name of Tradition, Family and Property, with the title Vatican Politics of Distension towards Communist Governments. For TFP: not to intervene or resist?

To resist means that we would advise Catholics to continue fighting against the Communist doctrine through all legitimate means, in defense of Country and Christian civilization under threat.

The lines of this declaration would not be sufficient to contain the list of all the Fathers of the Church, Doctors, moralists and canon lawyers – many of whom have been beatified or canonized – who sustain the legitimacy of resistance. A resistance which is not separation, nor revolt, nor acrimony, nor irreverence. On the contrary it is fidelity, union, love and submission. “Resistance” is the word we have chosen on purpose, as it has been used by St. Paul himself to describe his stance. Since the first Pope, St. Peter, had taken disciplinary measures to retain practices in the Catholic Faith which survived the ancient Synagogue, St. Paul saw in this a grave risk of doctrinal confusion and harm for the faithful. So he rose up and “resisted” St. Peter “to his face” who did not see an act of rebellion in this energetic and inspired action by the Apostle to the Gentiles, but [an act] of union and fraternal love. Furthermore, knowing well where he was infallible and where he wasn’t, he yielded to St Paul’s arguments. The saints are model Catholics. In the sense that St. Paul resisted, our position is resistance. In this, our conscience finds peace.

“Resistance” is not a purely verbal declaration of faith, but an act of love towards the Church, which leads to practical consequences. Those who resist are separated from the one who has caused the division in the Church, they criticize him openly, they correct him. In 2017, along these lines they expressed themselves with the Correctio filialis to Pope Francis and the leaflet of the pro-life movement appeared with the title: “Faithful to true doctrine, not to pastors who are in error.”

Today, along these same lines lies Cardinal Zen’s stance of no compromise in regard to Pope Francis’ new Ostpolitik towards Communist China. To those who object, and [say] that it is necessary “to try to find common ground to bridge the decades-old division between the Vatican and China,” Cardinal Zen replies:

But can there ever be anything in “common” with a totalitarian regime? Either you surrender or accept persecution, but remain faithful to yourself (can you imagine an agreement between St. Joseph and Herod?)

To those who ask him whether he is convinced that the Vatican is selling out the Catholic Church in China, he says:

Decidedly, yes. If they are going in the direction that is obvious in everything they have done in recent months and years.

On April 7th a conference has been called, which many are still ignoring, but which ought to have as its object the present crisis in the Church. The participation of some cardinals and bishops, and above all Cardinal Zen, would give maximum importance to this conference. We must pray that from the meeting a voice will be raised, full of love for the Church and firm resistance to all the theological, moral and liturgical deviations of the present pontificate, without being under the illusion that the solution is that of insinuating the invalidity of Benedict XVI’s abdication or Pope Francis’ election.

Taking refuge in the canonical problem means avoiding debate of the doctrinal problem, which is at the root of the crisis we are experiencing.

Editor's note: This article was translated by Francesca Romana for Rorate Caeli. It is reprinted here by permission.