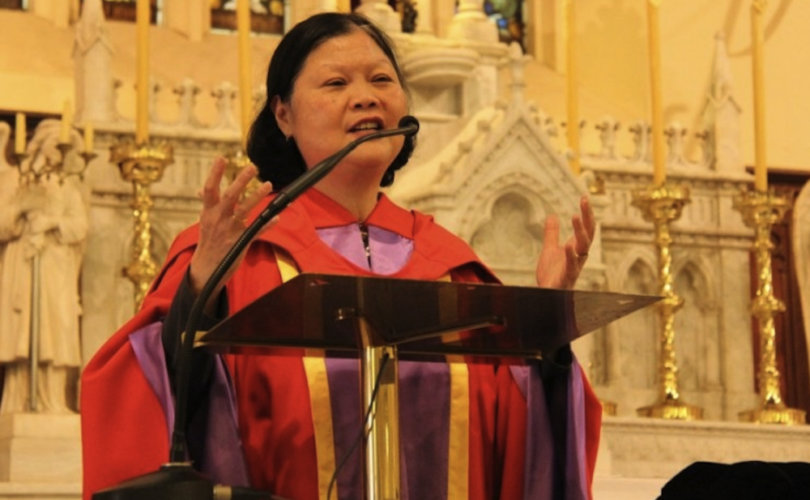 Editor's note: LifeSiteNews has contacted Catholic Relief Services for a comment on Woo's involvement in the FutureChurch event. We will post an update if they respond.

December 1, 2016 (Lepanto Institute) — The outgoing president and CEO of Catholic Relief Services, Dr. Carolyn Woo, is slated to participate in new project initiative of the heretical organization called FutureChurch. According to a press release by FutureChurch:

Using modern technology to bring the voices of Catholic women to the proclamation of the Gospel, CatholicWomenPreach.org will offer challenging, inspiring and faith-filled preaching by highly-qualified and diverse Catholic women from across the globe.

“We are pleased to launch this project with three highly respected Catholic women —  Jamie Phelps, OP, Astrid Lobo-Gajiwala and Barbara Reid, OP,” said Elizabeth Donnelly, who serves as Preacher Coordinator for the initiative. “Other initial preachers sure to inspire include Kerry Robinson, Carolyn Woo, Christine Schenk, CSJ, and Nontando Hadebe.”

Listed as one of the contacts is Deborah Rose-Milavec, who is identified as both the executive director for FutureChurch and project director for Catholic Women Preach.

It is entirely possible that Dr. Woo is unaware of the connection between CWP and FutureChurch, and perhaps is even ignorant of the agenda of FutureChurch itself.  If she was unaware of either of these things before, but now knows, she has an obligation to publicly rescind her participation and to denounce FutureChurch as an organization. The reason is that FutureChurch is an organization steeped in heresy, promoting (among other things) same-sex “marriage,” the priestly “ordination” of women, and contraception. By participating in a FutureChurch event, the president of Catholic Relief Services is giving the name and reputation of her organization to FutureChurch, lending it a sense of credibility. Considering that Catholic Relief Services has been doing this on its own for the past decade by funding and partnering with organizations that dispense contraception, perform sterilizations, and commit abortions, participation in FutureChurch initiatives may be viewed as more of the same.

There are hundreds of pages on FutureChurch’s website dedicated to the ordination of women. As one example, FutureChurch has a Q&A page dedicated to providing apologetic arguments as to why and how the Catholic Church should ordain women to the priesthood. The Q&A page suggests that Jesus never ordained anyone, claims that there is historical evidence of female priests in the ancient Church, suggests that the Church could change the male-only priesthood just as She changed Her requirement for circumcision, and gives suggestions on how to build the movement for the ordination of women. For all intents and purposes, FutureChurch is a women’s ordination lobbying group, but it’s heresy extends into all manner of sexual deviancy.

In preparation for the 2014 and 2015 Synods on the Family, FutureChurch signed on to an open declaration pertaining to certain issues that would be discussed at the Synod. The letter calls for the Church to accept those in open homosexual relationships and to permit the use of contraception. What follows is a translation, so some of the grammar is off:

Discrimination against homosexuals does not stop

Although the church has made some progress in the acceptance of the fact that not all people are called to a lifelong heterosexual commitment, it has done little to promote the acceptance of people with alternative sexual orientations as worthy members of the Church and society. The task of believers to accompany the acceptance of all who do not meet their own personal expectations, especially when these people lead an honorable life, has yet to begin in most Catholic parishes.

Acceptable contraception should be allowed

During the past 45 years, the leadership of the church clung to a teaching on responsible parenthood which excludes almost every practical means of regulating fertility. Gaudium et Spes tried a canonical perspective that marriage primarily as an institution widen considered the procreation and education of children. But the author of Humanae Vitae ignored the advice of its own advisory committee to review the teaching on birth and repeated the idea that a “willingness to reproduction” should be part of any marital sexual act. Church leaders must realize that the time has come to reform this doctrine.

The church must be left to the conscience of each pair to regulate fertility in a responsible manner that leads to their own specific situation. Although some forms of avoidance of conception are less than ideal, it may not be labeled as “intrinsically evil”. Such terminology confuses more than it illuminates. The use of acceptable contraception should not be regarded as matter for confession, the sacrament of reconciliation.

In November of 2014, Rose-Milavec, the Executive Director for FutureChurch, called upon the bishops of the United States to initiate a “year of dialogue” to give voice to Catholics who wish to break down the immutable teachings of the Catholic Church.  In the press release for this request to US Bishops, Rose-Milavec said:

Over the next year, all Catholics including those who are divorced and remarried, in same sex relationships, and who believe the Church’s teaching on contraception is out of step with the needs of Catholic families should have a voice. They should have the opportunity to engage our bishops in frank, honest and respectful discussions about the realities of family life, marriage and human sexuality.

In preparation for the 2015 Synod on the Family, FutureChurch recommended that their supporters:

Make recommendations to the Secretary General of the Synod of Bishops, to include experts and auditors who represent the full spectrum of Catholic families including divorced and remarried, cohabiting, same sex union, those who do not, in faith, adhere to the Church’s teachings on contraception.

In this October 2015 post on FutureChurch’s facebook feed, FutureChurch applauded the presentation that promoted the use of contraception for Catholics.

In October of this year, FutureChurch hosted an event focused on the acceptance of homosexuality in the Catholic Church and opening the way for women’s ordination.

In June of 2015, Rose-Milavec celebrated the Supreme Court’s ruling in favor of same-sex “marriage,” announcing that her “best friends [are] legally married.”

Amid many other posts where Deborah Rose-Milavec celebrated the same-sex “marriage SCOTUS ruling,” she praised a host of homosexual activists, saying:

In addition to changing her picture to reflect the celebration of the SCOTUS ruling on same-sex “marriage,” Rose-Milavec posted a disgraceful image of the homosexual rainbow flag superimposed over the image of Cardinal Raymond Burke.

Rose-Milavec announced that she wished the most pro-abortion, pro-homosexual president in United States history could remain in the White House for another 4 years …

… so, it should come as no surprise that she would be a big-time supporter of Hillary Clinton:

FutureChurch is a flat-out enemy of the Holy Catholic Church. As an organizational force, it represents and promotes the very opposite of the eternal Truth taught by the Church.  There is nothing good about this organization, and all Catholics who value their souls have a duty to not only disassociate from it, but to openly denounce it.

As we said in the beginning, by participating in a FutureChurch event, Dr. Woo publicly links CRS with open heresy, and by extension, the entire United States Conference of Catholic Bishops as well. But this isn’t the first time Dr. Woo had anything to do with FutureChurch. Earlier this year, Dr. Woo participated in FutureChurch’s Voices of Faith conference in Rome.

This is just yet another illustration of the spirit of compromise that has infiltrated the highest levels of the Church. Catholic Relief Services, for all the good it may do, will never be authentically Catholic until it stands firmly on the side of orthodoxy and fidelity to ALL of the Church’s magisterial teachings, refusing to give any aid, support, or credibility to the enemies of Christ.