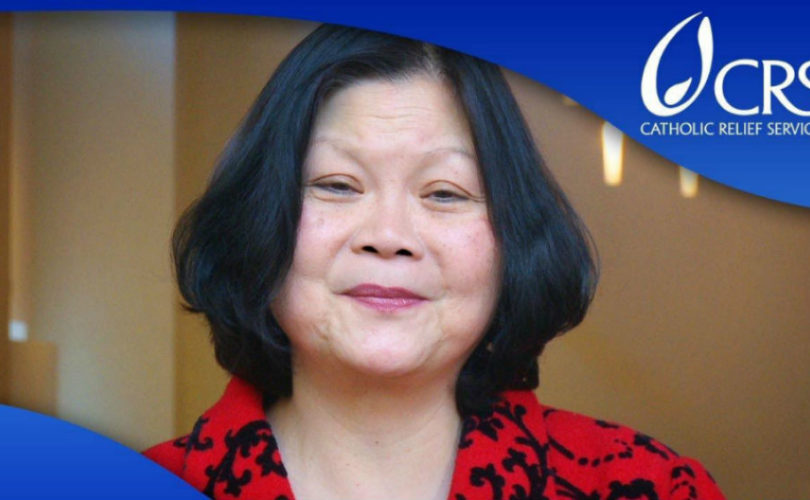 May 20, 2015 (LepantoInstitute.org) — In a recent interview with John Burger of Aleteia, Dr. Carolyn Woo, president of Catholic Relief Services, doubled down on CRS’s commitment to maintaining dues-paying memberships in contraception and abortion spreading organizations, providing funds to abortion and contraception distributing organizations, and retaining the employment of a vice president who is a homosexual activist in a same-sex “marriage.” During the interview, Dr. Woo was asked, “CRS has been criticized by some for failing to live up to Catholic standards in some ways. What has been done in response?” Characterizing the just criticisms of concerned Catholics as “attacks,” Dr. Woo replied with three points.

The type of attacks come in three forms. The first is: Why do we work with other organizations which don’t follow Catholic Church teaching?…

So when we have responsibilities for these types of activities, for the scope of these activities, if we don’t reach out to other partners who have coverage of those territories, we are basically leaving a big swath of population unattended. … If we don’t collaborate with other agencies, we are leaving those people without any hospitals or clinics or access to those medications.

Sometimes it’s, “Why do you belong to certain associations?” For example, the Cambodia Medical Association. It’s just like the American Medical Association. It’s very large, it covers all kinds of medical specialties, from malaria to nutrition to family planning. We belong because we need to find out what is the best treatment nowadays for nutrition and malaria and TB and chronic diseases. We do not attend the sessions for family planning. In fact, our Church partners use our membership to attend the sessions of the Cambodia Medical Association because we all need to know the parts that relate to us.

And also when we participate in family planning conversations, it’s to present natural family planning. If we are not there making our case, believe me, it would go away. Nobody would even ever know that there is something called Natural Family Planning, and that it works. CRS oftentimes is the only voice to say, “Wait a minute; this is our approach. It’s different from yours, and this is our evidence that it works.” So we are actually making the voice of the Catholic approach acceptable in these secular organizations.

In the first bolded comment, Dr. Woo categorically states that if CRS does not collaborate with other agencies, CRS is leaving people without any hospitals, clinics or access to medicine. This statement is completely false. The work of development and aid is an industry where corporate entities compete for grants. CRS is competing with World Vision, CARE Inc., Save the Children, the Futures Group, and a host of other similar organizations for grants from the Federal government and high-dollar foundations. If CRS was not willing to collaborate with enemies of the Body of Christ, CRS would not be able to obtain as many grants, but those grants would be won by other entities who would in turn provide the exact same service CRS would no longer be providing. So, the hospitals, clinics and medications would still reach people, the only difference is that the providers would be entities other than CRS.

The second and third bolded statements in Dr. Woo’s response are self-contradictory. In the first place, Dr. Woo claims that CRS does not attend the Cambodia Medical Association’s sessions for family planning, but then she starts talking about what happens when CRS participates in family planning conversations.  Both statements cannot be true.

Furthermore, Dr. Woo misstated the deep concern pro-life leaders have had with CRS’s dues-paying membership with a Cambodian organization.  Dr. Woo mentioned the Cambodia Medical Association, however consistent concerns have been with CRS’s dues-paying membership with MEDiCAM.  What Dr. Woo knows about MEDiCAM (because Michael Hichborn personally explained and provided documented proof to Dr. Woo in November of 2012) is that CRS has indeed been involved in the development of MEDiCAM’s policy papers, which included plans for the expansion of access to abortion providers, the training of abortion providers, and the distribution of all forms of birth control, especially abortifacients.

Here is some of the information provided directly to Dr. Woo.

Dr. Sok Pun represented CRS on the Steering Committee of MEDiCAM in 2011.

During MEDiCAM’s 2011 Annual General Meeting, Dr. Pun participated in a discussion on MEDiCAM’s position paper for 2011. As you can see in the screen capture below from MEDiCAM’s agenda, Dr. Pun represented both CRS and MEDiCAM’s Steering Committee in the discussion on that policy paper.

According to the minutes from the entire meeting, Natural Family Planning was NEVER a part of any of the discussions, and there are no objections to the radical abortion-expanding agenda of the meetings themselves. Furthermore, the draft of the policy paper, produced as a result of the meeting in which Dr. Pun participated, likewise never mentions NFP nor does it raise objections to the expansion of abortion.  What it DOES recommend, however, is to:

Dr. Woo knew all of this because the documents were personally hand-delivered to her and explained in great detail, and yet, in this interview she denied that CRS participated in conversations pertaining to family planning with the Cambodia Medical Association (which she misstated and likely meant MEDiCAM.)

The second one is that people accuse us of making contraceptives available or abortion and so on, and that is just absolutely not true. CRS refrains from any of those activities. There are grants where it may require the distribution of contraceptives. We refrain from participating in those grants. Or we seek special waivers so that we do not participate in those parts.

Here are just a few of the recent findings against CRS:

The last point Dr. Woo makes in response to concerned Catholics gives the appearance that CRS is going to retain the employment of a same-sex “married” vice president:

Number three,…CRS has a senior person who is in a civil gay marriage, and the question is, “Is that a violation of Church teaching?” I just want to say we are working through this. Gay marriage, of course, is a very complex issue. The Church is very clear that marriage as a sacrament is a between a man and a woman open to procreation. There’s also the Church teaching on natural law. Those are the teachings. … Does it mean that the Church should not employ anyone who is in a gay marriage? Are we giving a blanket No?… If it’s not a blanket No, are there particular positions, such as positions that are ministerial in nature, positions which relate to the formation of the faith of young children at school? … While the teaching is clear, as it translates into practice there has not been defined a common approach for dealing with employment, particularly when the position is non-ministerial, when the person is not a Catholic, when the agency is not a school. So we’re in that area when there have been various steps forward, but not a clear path.

Civil marriage is protected by the State of Maryland and 36 other states, as well as DC, so we’re also dealing with a new intersection between in this case state law and Church teaching where the practice is being defined.

For one thing, “gay marriage” is not a complex issue when it comes to the Church. It is an abomination before the eyes of the Lord. No matter which governments pretend to enact such a thing as law, what legal frameworks are erected around it, or what material consequences may arise from standing against it, the fact remains that Truth is Truth and evil must be opposed by the Catholic Church both in Her members and in Her institutions. There are plenty of other secular organizations that would be more than happy to employ a same-sex “married” executive, but such does not belong in Catholic institutions. Catholic Relief Services must remember that it is Catholic above all else, and that its first duty is to maintain the integrity of the faith. However, given its history of compromise by funding organizations that commit abortions, perform sterilizations, and distribute contraception, it’s willingness to help create policy papers that spread abortion without raising a hand in protest, its creation of documents that promote condoms, and its facilitation of contraception-promoting programs, it should come as no surprise that CRS would compromise its Catholic faith in favor of a more secular approach to aid and development with regard to a same-sex “married” vice president, either. So, perhaps it’s time for CRS to drop the charade and remove the word “Catholic” from its name. If obtaining government and foundation money is more important to CRS than bringing souls to Christ, or at the very least, not opening doors to wolves seeking to devour the faith of those CRS claims to serve, then it should continue its work as merely “Relief Services.”