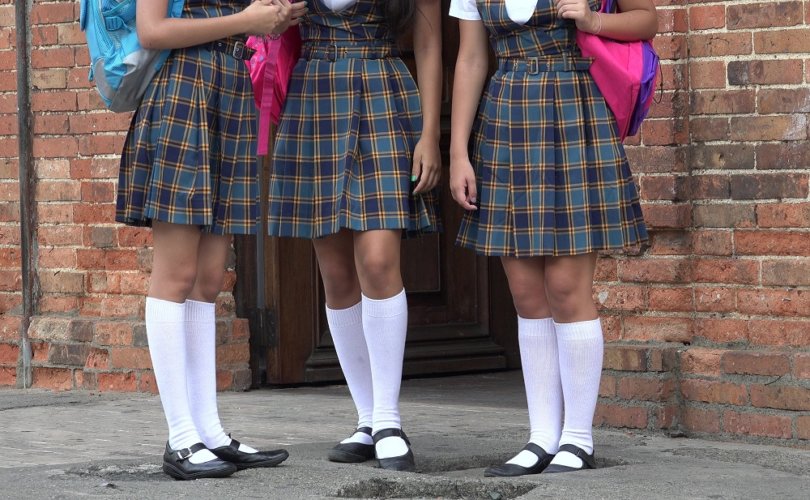 Editor’s note: The original headline on this article about the local bishop was an inaccurate presentation of the situation. It was not written by Fr. Cipolla and was not representative of his article. We apologize for the error.

March 16, 2018 (Rorate Caeli) – It is always local situations that show how deep the problems in the Church are at the present time. The problematic issuances from Rome, Germany and  Chicago are indeed disturbing, but to see how far things have gone, one must go to the local level of the Church:  the diocese and the parish.  Go to a typical parish Mass to see the fruit of the liturgical experiment of the post-Conciliar Church.  The unmooring from the Tradition of the Church is plain to see in the carrying out of the deliberate misunderstanding of the Mass and the disappearance of reverence.  Not to mention the precipitous decline in the percentage of Catholics who go to Mass regularly.

But one sees what has happened and is happening to Catholic doctrine also at the local level.  I live in one of the most wealthy counties in the United States.  There is also poverty in this county.  But when the median family income of the county is calculated, the poverty disappears in the wash of super-affluence.

This poverty is talked about by those who are entrusted with running the government and by those running the Church.  But those who run the Church understand that nothing can be done, at least at the basic level of dollars and cents, without the wealthy of Fairfield County.  Nothing to be done.  What they mean by “to be done” has little to do with Jesus' directive to go out and preach the Gospel.  What the hierarchy means by “to be done” is to pay attention to the assurance that the bureaucracy continues to function, much like the government in Washington D.C.  in the continuous pseudo-crises of government funding.

The Christian directive of love of neighbor has been divorced at a deep level by the hierarchy of the Church from the person of Jesus Christ and his teaching.  For a Catholic love of neighbor is impossible without love of God in the first place.  And love of God means love of the law of Love, a love that transcends the Law in the place and reality of the Cross of Jesus Christ but does not demolish the moral law. Christianity is not founded on being nice to one's neighbor, nor is it founded on a toleration of denial of truth in the name of being nice or of mercy as understood in a sentimental sense.  I must love my neighbor because the Son of God, God in the flesh, died for my neighbor.

We live in a time when the successor of St. Ignatius Loyola denies the real truth of Jesus' words in the Gospels.  That someone in a position of power in the Church says something so stupid and un-Catholic in trying to defend the clever ambiguity being spouted by Pope Francis on the Catholic understanding of marriage, by asking a devilish question about Jesus' words on marriage in the eighteenth chapter of the Gospel of Matthew.  The General asks: Did anyone have a tape recorder to hear what Jesus actually said about marriage?  Such a question makes liberal Protestantism seem like Grey Poupon, ultimately uninteresting but at least slightly tasty. To deny that the Gospels record the ipsissima verba of Jesus and to assert that these words are open to the interpretation of the hierarchy of the Church in any given age to fit the times is to evacuate any meaning of the role of Scripture in the Catholic Church.  Luther himself would have fought this perverse denial of the truth of Scripture.  To believe in the truth of Scripture is not to be fundamentalist. It is to trust that God truly speaks in Scripture and in the deepest sense through His Son who is the Word of God and the Chief Shepherd of the Church. This attempt to unmoor the teaching office of the Magisterium from Scripture is yet another noxious off-spring of that hyper-papalism that threatens the foundations of the Church.

But all of this is a prelude to the situation in my part of the world that summarizes and exemplifies the parlous situation of the Church today, parlous in the sense that it has nothing to do with the evangelization mandate of Jesus to the Apostles .  For this age, shaking the dust off one's feet in the face of unbelief is not in the realm of possibility given the flaccid miasma of deliberate denial of the possibility of non serviam in the name – mirabile dictu et res horrenda – of mercy.

There has arisen a situation in a private school in Greenwich, CT, whose tradition is that of the Madames of the Sacred Heart of Jesus that is a clear example of where the Church militant is today.  The school is known as Sacred Heart, and one would think that the name would imply that this is a Catholic school.  A young woman student had put on her laptop a sticker issued by Planned Parenthood that said: “I stand with Planned Parenthood.”  It is not clear who the “administrators” were who first asked the student to remove the sticker. One could dare to believe that these administrators did so because they came to the conclusion that to display such a sticker in a school that claims to be Catholic is a contradiction.  The Head of the School reacted with a statement that affirmed the obvious contradiction. Her decision was that the young woman must remove the sticker or leave the school either immediately or by the end of the school year.  The bishop of the Diocese issued a statement:

The Catholic Church's opposition to abortion is almost universally understood, as is its consistent pro-life ethic, which defends the right to life of all those among us, particularly the most vulnerable in our society.   As such the diocese fully supports the commitment of Head of School Pamela Hayes to affirm the Church's teaching, while also recognizing and respecting the right of students to question and challenge as they grow in the learning process and prepare to address the important moral and ethical issues they will face in their lives.

The Communications Director of the Diocese of Bridgeport issued a statement:

When he was made aware of the situation, (the Bishop's) immediate response was that the student should be respected and that the issue was an opportunity for a teaching moment. Pamela Hayes fully agreed and has been working to affirm Catholic teaching and the school's mission, while reaching a positive resolution for the student and her family.

And so the reaction came. Not from the Times and the liberal press. But rather from parents and alumnae of Sacred Heart in Greenwich and other Sacred Heart schools.  An alumna from a Sacred Heart school in Newton, Massachusetts, who is President and CEO of Planned Parenthood for Southern New England is quoted as saying:  “This comes very close to home for me.  In my Sacred Heart education, I learned to use my voice … This particular situation strikes me as in contrast to lifting up young women and encouraging them to use their voices.” This woman who is quoted was “baptized Catholic” and said that both Planned Parenthood and the Catholic Church share values of community service. She said: “Planned Parenthood stands for people who want to control their own reproductive lives, whatever that means to the individual.  We are so much more than we are often reduced to as an organization.”

The reaction in Greenwich was strong and swift.  Over two thousand people signed an online petition called “I stand with Kate Murray”. The petition states: “Unless Kate is allowed her freedom of speech, all of my future donations that would have been allocated to Sacred Heart Greenwich will now and be forever be donated to Planned Parenthood.”

Under this pressure the Head of School reversed her previous decision in an op-ed piece in the local newspaper, the Greenwich Time.  Pamela Hayes, the Head of School, wrote: “We would never dismiss a student for what she believes of a cause she supports and will not now. “

What does one conclude from all of this?  First, the Mad Hatter's Tea Party is a model of sanity and intellectual rigor in comparison to this sad farce.  Second, this is a prime example of the collapse of the reality of the teaching of the Catholic Church. It is not only that big money and social pressure obviate the clear teaching of Christ and His Church.  It is also that those who are entrusted with the mission of the Church, from parents to Heads of School to priests and bishops, have capitulated to the world, often in the name of enlightenment or intellectual freedom or the right of someone to believe anything he or she want to believe even if it contradicts truth:  this is the terrible tragedy of our time.

I would ask all involved in this tragic comedy to ponder Jesus' words in the gospel of Matthew:   “Whoever causes one of these little ones who believe in me to sin, it would be better for him to have a great millstone fastened around his neck and to be drowned in the depth of the sea” (Matthew 18:6, RSV).

Published with the author's permission from Rorate Caeli.