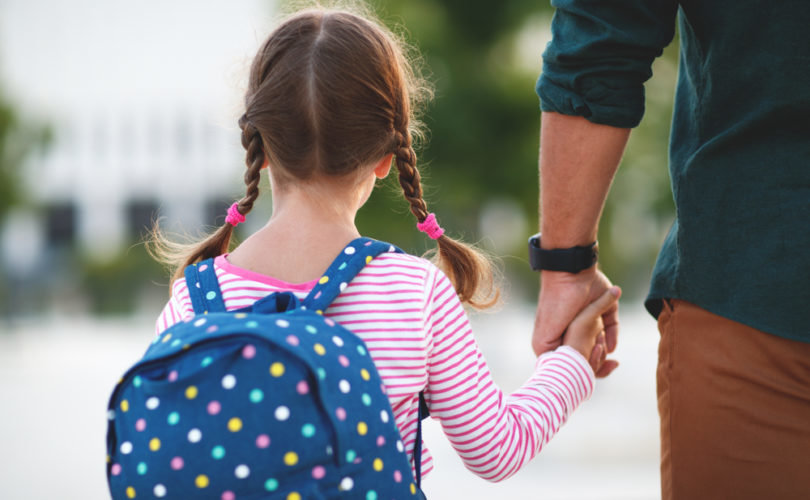 May 31, 2021 (LifeSiteNews) – As a Religion teacher and a parent, I urge you to take a hard stand against the ‘Pride’ flag being flown over our children’s school.

The ‘Pride’ flag has been adopted by these school boards ostensibly as a sign of acceptance and inclusion.  But in fact, the ‘Pride’ flag flying over Catholic schools is a sign of scandal, counter-witness, and capitulation to the spirit of the world.

The Spirit of the World is an old-fashioned term, which has never seemed more apt. The scope and speed of social change is dizzying and frightening. At the forefront is the destabilization of the most basic truth about our being; our maleness or femaleness.  LGBTQ2S+ includes a plus symbol at the end of the acronym because of the ever-expanding list of gender identities.  These are not merely tolerated in a spirit of liberal pluralism.  They are championed.  And everything else, especially “cis-gender hetero-normativity”, is required to take a knee and repent as a systemic oppressor.

This is a scandal and a counter-witness to our children because it belies the most essential truth about our humanity. Genesis 1 reads: God created man in his image; in the divine image he created him; male and female he created them.

Our maleness and femaleness are not “accidents”, that is, non-essential traits like hair color or complexion.  They are not variables to be swapped out like parts on a Transformer doll.  Persons are not an existential blank slate, choosing to be male or female or other.  This is obvious both through Revelation and through nature.

Genesis says, “male and female he created them.” It is important to note that quoting this very familiar scripture may well constitute hate speech in Canada. But it is absolutely essential to the Catholic understanding of human personhood. The fulfillment of sexuality through procreation is a reflection of the Holy Trinity.

At the natural level, every cell in our bodies is informed by our DNA, which is either XX or XY. Every cell in our bodies is either male or female. But for humans, unlike other animals, our sexuality is not merely instinctive.  As children and throughout our lives we are socialized into our understandings of maleness and femaleness.  For two generations our sexual socialization has been warped by contraception, abortion, and celebrated promiscuity.  This has progressively estranged men and women and left many of us despondent at the possibility of true love and friendship between men and women.  Especially in the past two decades, fewer and fewer people are getting married or even living common law.  In 2017, for the first time in history, “single adult living alone” became the most common household type in Canada.  When man awoke to find the woman made from his rib, he said: “this at last, is bone of my bone, and flesh of my flesh.” But as a culture, we have lost our sense of being made for each other. To get a sense of the scope of the change we are witnessing, read this piece from Rod Dreher.

Catholicism is sacramental.  A sacrament is a sign which achieves what it signifies.  For example, in Baptism, water both signifies and achieves cleansing.  External signs both point to and create internal realities. As Fr. Raymond D’Sousa points out, Catholic Churches do not fly the Canadian flag from their steeples because to do so would obscure a more fundamental truth, namely, that we live under the sign of the Cross. But to fly the ‘Pride’ flag over our schools – or our churches for that matter – would not merely obscure, it would contradict both nature and our faith.

But as dark as this is, as Catholics, we know that faithfulness to Christ is the only way to truly love our children.  As Catholic trustees, administrators, teachers, and parents we must take heart and speak up for what is right.  As Cardinal Collins wrote: “Parents make a clear choice when they decide that their children will attend a Catholic school. They rightly expect that trustees, principals, teachers – all partners in education – will ensure that Catholic teaching is presented, lived and infused in all that we do.”

Joe Bissonnette is married with 7 children. He’s been teaching religion for 24 years.