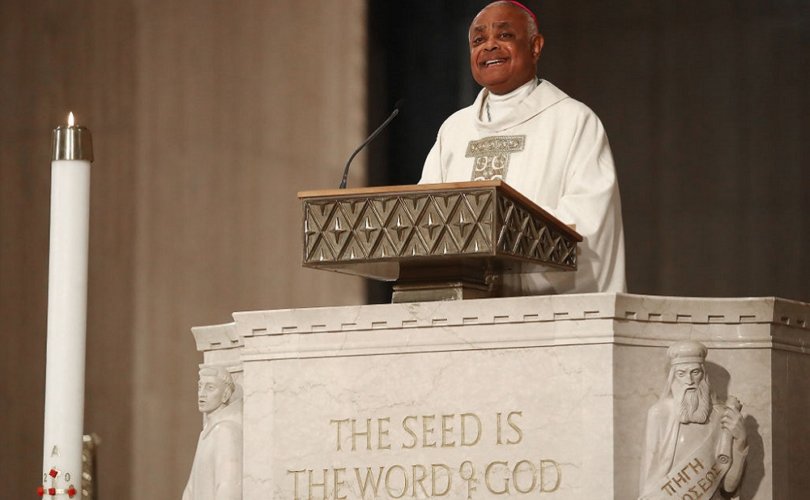 August 4, 2020 (LifeSiteNews) – Deus Lux Mea Est (“God is My Light”) is the motto of The Catholic University of America, the only higher education institution founded by the United States bishops. Promoting itself as the papally chartered national university of the Catholic Church, it was officially established in 1887 as a graduate and research center. Following its first principle that “the teaching of the University should be faithfully Catholic, conformed in all things to the creed of the Church and the decisions of the Holy See,” the University still bills itself as faithfully Catholic today, stating that service and faith are at the heart of their mission. Yet evident in CUA’s recent programs and hiring of faculty is an increasingly leftist bent.

John Garvey, the president of CUA (or Catholic-U, as it is now being touted), appointed left-leaning Jo Ann Coe Regan as the new dean of the National Catholic School of Social Services (NCSSS) on June 4, 2020, replacing William Rainford, who lost his job as dean of the school in November 2018 after committing the faux pas of using his @NCSSSDean tweet handle to tweet against Christine Blasey Ford (the accuser of Judge Brett Kavanaugh, who alleged sexual improprieties against him during his supreme court appointment hearings in September 2018). Rainford was immediately placed on suspension by Garvey after faculty and students loudly demanded that he be fired. Unsurprisingly, Rainford resigned after making a public apology. But long before Professor Rainford made his fateful tweets, the writing was on the wall. Faculty at NCSSS, made up mostly of left-sympathizing women, had been pushing to get Rainford out because of his conservatively held views and opinions and had been demanding that Garvey appoint a woman in the role of dean. The Rainford–Blasey Ford tweets were the opportunity they had been looking for.

This is not the first time that leftist propaganda has held sway over traditional Catholic ideals at CUA. Approximately a year before Rainford’s dismissal, leftist pundits and LGBT-supporters expressed outrage at Theological College’s decision to rescind its invitation to Father James Martin to speak at its Alumni Days festivity. This rescission was brought about by a backlash of faithful Catholics who questioned the seminary’s pick of the controversial priest to speak during the celebration because of his pro-homosexual and pro-transgender viewpoints. Theological College (CUA’s seminary, which is often jokingly referred to as “Theological Closet”) was inundated with protests from these loyal Catholics, many whose sons and daughters attended CUA. Likewise, Garvey’s office was bombarded by proponents of the left, who slammed those opposing Martin as right-wing homophobes and threatening to boycott CUA. Garvey immediately sided with the left by issuing a stinging statement against those concerned Catholics, comparing their protest tactics to the left’s, thereby extricating CUA from any involvement with the decision.

But Garvey’s statement served to pander to the left, a direction in which Garvey has steadily helped to drive the university throughout his tenure as the president of CUA. Faculty and guest speakers, whose opinions, statements, or beliefs adhere to conservative or traditional Catholic teachings, are not accorded the same platform as their liberal peers. You will rarely, if ever, see prelates like Bishop Athanasius Schneider or Cardinal Gerhard Müller (who last spoke at the university on October 24, 2014) invited as speaking guests. Instead, favor is given to more liberal prelates such as Cardinal Blase Cupich, Cardinal Timothy Dolan (both of whom serve on CUA’s Board of Trustees), and Cardinal Luis Tagle (a particular favorite of the university), as well as Vatican secretary of state Cardinal Pietro Parolin, who was given an honorary Doctor of Theology degree on November 14, 2017 after presenting an address on the positive fruits of the Second Vatican Council in a speech entitled “The Council: A Prophecy that Continues with Pope Francis.”

With the appointment by Pope Francis in 2019 of Archbishop Wilton Gregory to succeed Cardinal Donald Wuerl as overseer of the Washington, D.C. archdiocese and chancellor of CUA, the tenor at the university has become progressively politically correct. After a blistering public attack against President Donald Trump and First Lady Melania Trump while visiting the John Paul II National Shrine on June 2, 2020 in honor of Saint John Paul II’s birthday and preceding the signing of the executive order to preserve religious freedom, Gregory sent out what many considered a summons to all clergy within the archdiocese, as well as to CUA, to rally in solidarity against the Trump White House. In compliance, President Garvey sent out a campus-wide email through the Communications Department of the university urging all clergy, faculty, and staff members to join in the protest, cloaking the message as an invitation from the archbishop to all faithful Catholics to publicly witness against institutional racism. The email, dated Monday, June 8, 2020 at 6:57 A.M., mirrored the message sent out by the archdiocese:

Archbishop Gregory has invited local clergy and the Catholic lay faithful to publicly witness against institutional racism and to pray for the soul of George Floyd and the soul of this country at noon today. Participants will gather at 11 a.m. in Lafayette Park and proceed to the White House for prayer at noon. I encourage interested staff and faculty to join the gathering to rededicate ourselves to the defense of all life and to recommit ourselves to pray for an end to racism. If your duties permit you to join the event, the time away from the University will not be charged as leave or vacation time.

Purportedly a peaceful prayer vigil, priests and nuns in requested full habit, as well as many faculty, staff, and students from CUA, carried signs and protested alongside Black Lives Matter and Antifa activists who openly condemned President Trump. One Dominican nun carried a sign proclaiming, “I repent of my racism. #Black Lives Matter.” The call to protest by the archdiocese set off a chain reaction at CUA resulting in clusters of protests on campus and prompting at least one prominent associate professor to display on his official CUA email signature block the raised fist sporting an evil-looking Red, the University’s mascot, along with a link to a retail manufacturer selling tee shirts displaying the same logo and proudly proclaiming Cardinal Solidarity.

There are many who still remain loyal to CUA, long-timers who remember the days of a tight-knit, familial community under Reverend David O’Connell (now bishop of Trenton, New Jersey), whose 12-year leadership pulled the university back from a spiritual malaise and loss of faith identity. He remained devoted to traditional Catholic teachings despite sharp criticism from the gay community and was well loved on campus, going out of his way to learn the names of staff and students. Under President Garvey’s tenure, many have left or are leaving the growing toxic environment at CUA in an exodus of employees fed up with empty promises and unfair practices from a top-heavy management more intent on pleasing the left than addressing the concerns of staff and faithful Catholics who have long supported CUA.

Maybe the new motto for CUA should be Tantum in Nomine Catholica (“Catholic in Name Only”).

Theresa Nixon began a writing career in Los Angeles as a freelance writer reviewing local bands and interviewing celebrities, spending over ten years working in the entertainment industry before seeking a more spiritual path and returning to her Catholic roots. Most recently, she spent nearly five years at The Catholic University of America as an administrative assistant working at various departments, including the Office of the President, and earned a Master’s degree in management while at CUA in 2018.