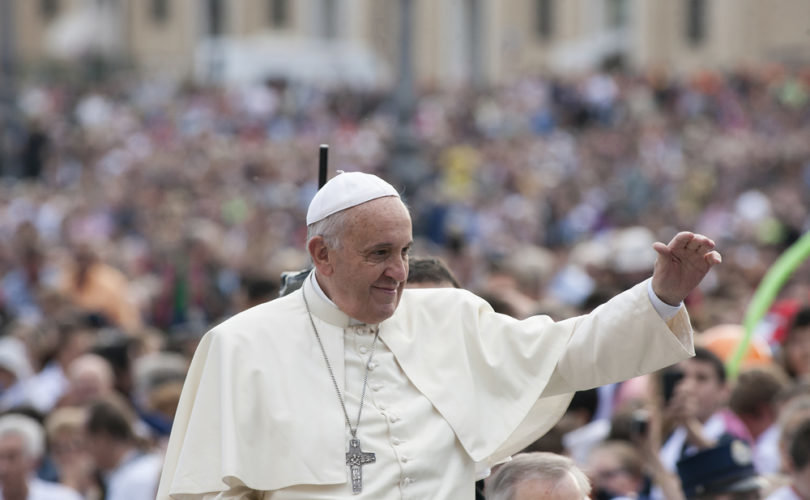 April 8, 2016 (Voice of the Family) – The promulgation of the Apostolic Exhortation Amoris Laetitia by Pope Francis marks the conclusion of a synodal process that has been dominated by attempts to undermine Catholic teaching on matters relating to human life, marriage and the family, on questions including, but not limited to, the indissolubility of marriage, contraception, artificial methods of reproduction, homosexuality, “gender ideology” and the rights of parents and children. These attempts to distort Catholic teaching have weakened the Church’s witness to the truths of the natural and supernatural order and have threatened the well-being of the family, especially its weakest and most vulnerable members.

The Apostolic Exhortation Amoris Laetitia is a very lengthy document, which discusses a wide variety of subjects related to the family. There are many passages that faithfully reflect Catholic teaching but this cannot, and does not, lessen the gravity of those passages which undermine the teaching and practice of the Catholic Church. Voice of the Family intends to present full analyses of the serious problems in the text over the coming days and weeks.

Voice of the Family expresses the following initial concerns with the greatest reverence for the papal office and solely out of a sincere desire to assist the hierarchy in its proclamation of Catholic teaching on life, marriage and the family and to further the authentic good of the family and its most vulnerable members.

We consider that in raising the following concerns we fulfil our duty as clearly laid out in the Code of Canon Law, which states:

According to the knowledge, competence, and prestige which they possess, they have the right and even at times the duty to manifest to the sacred pastors their opinion on matters which pertain to the good of the Church and to make their opinion known to the rest of the Christian faithful, without prejudice to the integrity of faith and morals, with reverence toward their pastors, and attentive to common advantage and the dignity of persons. (Canon 212 §3)

Admission of the “divorced and remarried” to Holy Communion

Amoris Laetitia, over the course of Chapter VIII (paragraphs 291-312), proposes a number of approaches that prepare the way for “divorced and remarried” Catholics to receive Holy Communion without true repentance and amendment of life. These paragraphs include:

A particularly troubling example of misquotation of previous teaching is found in paragraph 298 which quotes the statement of Pope John Paul II, made in Familiaris Consortio, that there exist situations “where, for serious reasons, such as the children’s upbringing, a man and woman cannot satisfy the obligation to separate.” However in Amoris Laetitia the second half of Pope John Paul II’s sentence, which states that such couples “take on themselves the duty to live in complete continence, that is, by abstinence from the acts proper to married couples” (Familiaris Consortio, No. 84),  is omitted.

Furthermore, in the footnote to this misleading quotation, we read:

In such situations, many people, knowing and accepting the possibility of living ‘as brothers and sisters’ which the Church offers them, point out that if certain expressions of intimacy are lacking, ‘it often happens that faithfulness is endangered and the good of the children suffers’ (Second Vatican Ecumenical Council, Pastoral Constitution on the Church in the Modern World Gaudium et Spes, 51).

The document makes reference to this erroneous view but does not explain why it is a false approach, which is namely that:

The document cites Gaudium et Spes but the passage is quoted out of context and does not support the argument made. The context makes clear that Gaudium et Spes is speaking of married Catholics, in the context of procreation, not those cohabiting in an invalid union. The full sentence is as follows:

But where the intimacy of married life is broken off, its faithfulness can sometimes be imperilled and its quality of fruitfulness ruined, for then the upbringing of the children and the courage to accept new ones are both endangered (Gaudium et Spes, No. 51).

It is therefore difficult to avoid the conclusion that the Apostolic Exhortation is at least raising the possibility that adulterous sexual acts might in some cases be justifiable and has misquoted Gaudium et Spes as if to provide grounds for this.

Other approaches that undermine Catholic doctrine on reception of the sacraments will be discussed by Voice of the Family in due course.

Amoris Laetitia includes a section entitled “The Need for Sex Education” (paragraphs 280-286). This section spans more than five pages without making even one reference to parents. On the other hand there is reference to “educational institutions”. Yet sex education is “a basic right and duty of parents” which “must always be carried out under their attentive guidance, whether at home or in educational centers chosen and controlled by them” (Pope John Paul II, Familiaris Consortio, No. 37). The omission of this teaching seriously fails parents at a time when parental rights regarding sex education are under serious and sustained attack in many nations of the world, and at the international institutions. In this section Amoris Laetitia does not cite any of the previous Church documents that clearly affirm this right; it does however cite a psychoanalyst, Erich Fromm, associated with the Frankfurt school. The document’s earlier references to parental rights (paragraph 84), while welcome, cannot compensate for the exclusion of parents from this section.

Amoris Laetitia, following an approach similar to that previously adopted in synod documents, implies that “same-sex unions” may offer a “certain stability” and can have a kind of similarity or relation to marriage. It states that:

We need to acknowledge the great variety of family situations that can offer a certain stability, but de facto or same-sex unions, for example, may not simply be equated with marriage. (Paragraph 53)

There is great pressure at the international institutions for the rejection of the traditional understanding of the family through the adoption of language which refers to “variety” or “diversity” in the forms of the family. The implication that “same-sex unions” form part of the “great variety of family situations” is precisely what pro-family groups are fighting hard to oppose. By using such language the Apostolic Exhortation undermines the pro-family movement’s work to protect the true definition of the family and, consequently, to protect children who depend on the family structure willed by God for their well-being and healthy development.

It should be noted that in paragraph 251 the authentic teaching of the Church, that “there are absolutely no grounds for considering homosexual unions to be in any way similar or even remotely analogous to God’s plan for marriage and family” is restated.

Amoris Laetitia endorses a central aspect of “gender ideology” by asserting that it “needs to be emphasized” that biological sex and socio-cultural ‘gender’ can be “distinguished but not separated” (paragraph 56). This acceptance of the underlying principle of gender theory undermines the document’s otherwise welcome criticism of the ideology and its effects. The false notion that biological sex is distinguishable from so-called “gender” was first proposed in the 1950s and is the foundation of “gender ideology”. Opposition to the consequences of “gender ideology”will be impossible if its erroneous first principle is accepted.

Amoris Laetitia fails to grapple with the scale of the threat to unborn children, the elderly and the disabled. Conservative estimates indicate that over one billion unborn lives have been destroyed by abortion over the last century. Yet in a document addressing challenges to the family, which is 264 pages long, there are only a small number of passing references to abortion. There is no mention of the destruction caused by artificial methods of reproduction, which have also resulted in the loss of millions of human lives. The absence of serious discussion of attacks on unborn life in this context is a grave omission.

There is also minimal reference to euthanasia and assisted suicide despite the increasing pressure for their legalization across the world. Failure to adequately discuss this threat is likewise another very regrettable omission.

Amoris Laetitia fails to adequately restate Catholic teaching on the use of contraception. This is a troubling oversight given that (i) the separation of the procreative and unitive ends of the sexual act is a major catalyst for the culture of death and that (ii) there is widespread disobedience and ignorance of the Church’s teaching in this area precisely because of the failure of the hierarchy to communicate this truth.  The document’s discussion of conscience is likewise flawed both in paragraph 222, which deals with “responsible parenthood”, and in Chapter VIII which deals with the admission to the sacraments of those in public adultery. Paragraph 303 is of particular concern, especially in the following assertion:

Yet conscience can do more than recognize that a given situation does not correspond objectively to the overall demands of the Gospel. It can also recognize with sincerity and honesty what for now is the most generous response which can be given to God, and come to see with a certain moral security that it is what God himself is asking amid the concrete complexity of one’s limits, while yet not fully the objective ideal. In any event, let us recall that this discernment is dynamic; it must remain ever open to new stages of growth and to new decisions which can enable the ideal to be more fully realized.

This statement seems to adopt a false understanding of the “law of gradualness” and suggest that there are certain occasions when sin is not only unavoidable but even actively willed by God for that person. This would clearly be unacceptable.

This is only a brief introduction to the very numerous problems found within Amoris Laetitia. It will take further study to fully draw out all the implications of the text but it is already abundantly clear that the document fails to give a clear and faithful exposition of Catholic doctrine and leads inescapably to conclusions that could result in violations of the immutable teaching of the Catholic Church, and those disciplines which are inextricably founded upon it. Our initial overview provides sufficient cause to regard this document as a threat to the integrity of the Catholic faith and the authentic good of the family.

We reiterate once again that we make these criticisms with great reverence for the office of the papacy but with the consciousness of our duties as lay Catholics towards the good of the Church, and our duties as pro-life/pro-family campaigners to work to protect the family and its most vulnerable members.