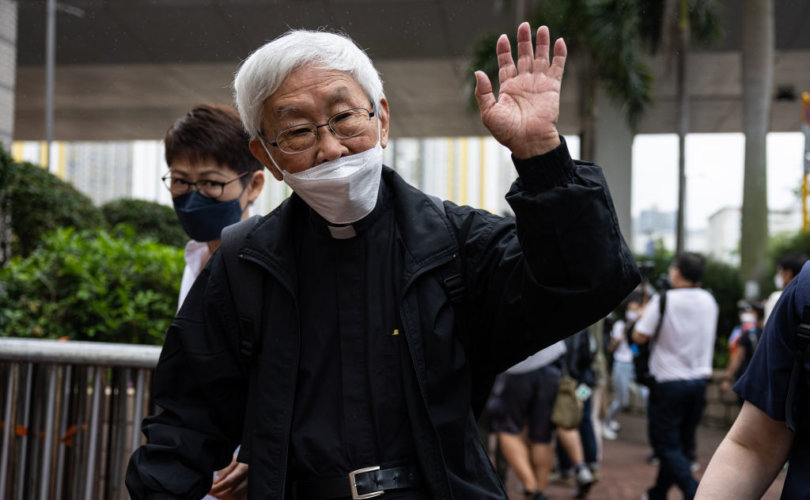 Cardinal Joseph Zen arrives at the West Kowloon Magistrates' Courts on May 24, 2022 in Hong KongPhoto by Louise Delmotte/Getty Images

As Al Jazeera reported on Sunday, Zen “will face court with five others, including popular Cantopop singer and LGBTQ activist Denise Ho and lawyer Margaret Ng, over a now-defunct fund they set up to help pay the legal fees of people facing trial in relation to the 2019 protests.”

It’s the vocation of the Christian to stand in solidarity with the most vulnerable among us. For a bishop, that vocation applies first and foremost to the persecuted members of one’s own flock. But it should not stop there. And for Zen, it doesn’t.

In fact, even in his arrest and upcoming appearance before the court, Zen has given the world a great gift. In Zen, China has picked a target who shows clearly the value that Christian witness provides in the world. Because without men like Zen – and Catholics who follow his lead – brutal rulers like China’s Xi Jinping will strongarm any group – from secularist agitators to pious Muslim Uyghurs to peaceful Roman Catholics – that seeks a life free of coercion.

All have pleaded not guilty and, in the five days allocated for proceedings, their defence is expected to argue that the group had a right to associate under Hong Kong’s Basic Law, the mini-constitution that has been in place since the British handed the territory over to China in 1997.

“The Chinese government wants to cut off all forms of organizing and solidarity that run outside of the Communist Party’s control in Hong Kong,” William Nee, research and advocacy coordinator at Chinese Human Rights Defenders, said in an emailed response to questions. “The fact that Cardinal Zen is compassionate, caring, and well-respected in Hong Kong actually makes him a threat to the ruling authorities.”

…Throughout his career, Zen has shown support for democratic reform and giving the people of Hong Kong more say in their government. He held a “walkathon” for universal suffrage, masses in remembrance of the 1989 crackdown in Tiananmen Square and visited the Occupy Hong Kong site to provide moral support to the thousands who had gathered there.

It’s a mark of the great failures of leadership both in government and in the Church that it has now fallen to Zen and a few allied dissidents to advocate for principles that very recently represented the mainstream in our political culture.

Totalitarian China just recently put an end to the Church’s public commemorations of the Tiananmen Square massacre. Clearly, the Chinese regime represents a common threat both to Catholics and to all free peoples.

And for us lay Catholics, the path forward couldn’t be clearer.

— Article continues below Petition —
Join Bishops in calling out Pope Francis' statement for contradicting the faith
Show Petition Text
2130 have signed the petition.
Let's get to 2500!
Thank you for signing this petition!
Add your signature:
Show Petition Text

China’s atheist regime has trampled on the right of members of the Catholic laity just like you and me to live a Christian life, and is now putting our cardinal on trial for being a Christian himself.

How should we respond? For the sake of our Faith and its courageous representative, for the sake of our vulnerable neighbors who live under constant attack by the CCP menace, and for the sake of Our Lord who commanded us to treat “the least of these brethren” as if they were Himself –  we must respond with a clamor like the world has never seen before.

We Catholics who live in free nations have tremendous power to influence our political leaders. It’s time to take full responsibility for that power, and bring to bear all the pressure that our massive membership can muster.

Wherever you live, let your representatives know that China’s outrages can no longer go unanswered. From the United States to Poland, from Spain to France – every nation where there are free Catholics should now be forced by public outcry to decouple from the Chinese Communist Party.

Public officials might object, claiming that our outcry distracts from “more pressing” issues. That we Catholics are being “disruptive.”

Yes, we are – and we must be. After all, in the trial of Zen, all that we in the free nations of the world hold in common is on trial.

And let’s pray that the earthquake does not subside until China’s Tower of Babel crumbles, and not one human being is forced to live under its shadow.

READ: Pope Francis has betrayed Cdl. Zen in his hour of greatest need