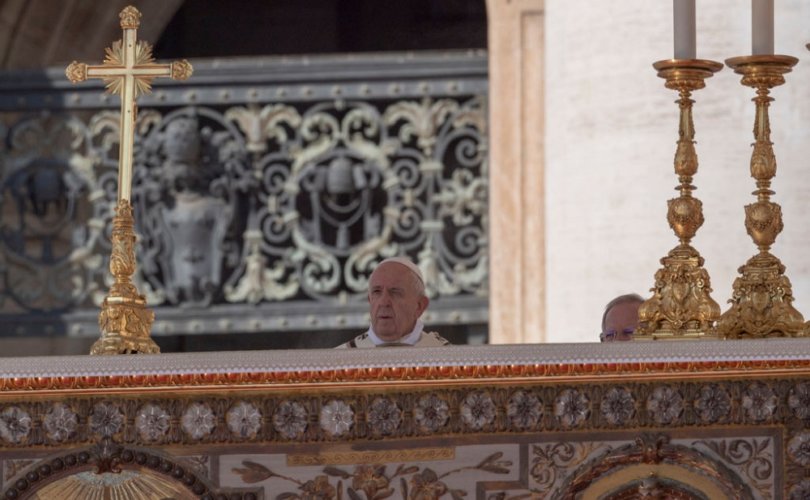 December 20, 2019 (CatholicCulture.org) — If you asked loyal Catholics to subsidize a film dramatizing the life of Elton John, you'd get a disappointing return. But ask them to contribute to the needs of the Holy Father, and you'll see real generosity.

If you ask Catholics to invest in the London real-estate market, or in a shady Italian bank, or a bankrupt hospital, don't expect much. But say that the Pope has charitable projects in mind, and the checkbooks will open.

So for years the Vatican has asked the faithful to support the Pope's needs, emphasizing his charitable projects — and then invested the returns in London real estate, a shady Italian bank, a bankrupt hospital, and, yes, a film about Elton John.

That's the fundamental scandal behind the latest financial news from the Vatican.* It's not that these investments were often made without proper authorization (although they were). It's not just that the people making the investments fought fiercely to prevent disclosure (although they did). It's not that slick investors profited handsomely from the under-the-radar deal (although they did). It's that the Vatican raised money for one set of purposes, and used that money for another. It's a bait-and-switch.

When the Wall Street Journal revealed that only 5% of the funds from the annual Peter's Pence collection are used for charitable projects, the Vatican's defenders replied that there was nothing illegal about the uses to which the money was put. That's true enough. But when the Holy See uses the “I am not a crook” defense, you know that something is seriously wrong. And something is.

Yes, it's true that when you contribute money for the needs of the Roman Pontiff, it's his money, to use as he sees fit. If he wants to use most of those funds to wash some of the red ink out of the Vatican's operating budget, that's not unreasonable. If he wants to invest the money, hoping to increase the principal, that's a legitimate decision. (It's not clear to me why an institution with ample long-term assets, but a seriously unbalanced operating budget, would be investing current funds for future returns. But I've never claimed to be a financial expert.)

But when the Peter's Pence collection was taken up in your parish, were you told that most of your donation would be used to balance the Vatican budget? Or that some of the money would be invested for future returns? Not likely. In promotional literature for the collection, the US bishops' conference said:

The purpose of the Peter's Pence collection is to provide the Holy Father with the financial means to respond to those who are suffering as a result of war, oppression, natural disaster, and disease.

But in fact 95% of the collection was used for other purposes.

The facts exposed by the Wall Street Journal — and in a series of excellent investigative reports by the Catholic News Agency — may not produce indictments and convictions. But at a bare minimum they should be sufficient to demonstrate the need for greater transparency and accountability in the Vatican's financial dealings — a need for the sort of reform that we have been promised, the sort of reform that has been consistently thwarted by the entrenched powers of the Roman Curia.

When Catholics send donations to Rome, they deserve something more than a nervous assurance that the use of their money was not technically illegal. They should have confidence that the money was raised and used honestly.

*Here I am setting aside the possibility — I would venture to say the probability — that when these investments are examined carefully, a greater scandal will be exposed.