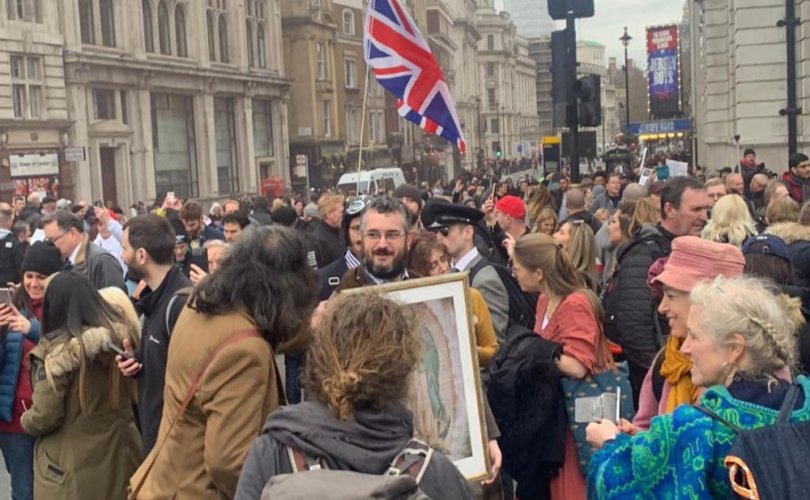 A Catholic anti-lockdown protestor (not the author of this article)

Editor’s note: The author of the following piece wished to remain anonymous.

LONDON, England, March 24, 2021 (LifeSiteNews) – This past Saturday several friends and I apprehensively walked up Grosvenor Place towards Hyde Park Corner in the center of London. We'd heard that numbers of anti-lockdowners had started to amass there, with the police helicopter overhead and riot vans zooming past confirming our suspicions.

With most of us known to each-other through the traditional Catholic movement, we had no idea what to expect after varying experiences at previous anti-lockdown events. In the midst of hundreds soon to be thousands of people grouping together, one of our number revealed a large, framed image of Our Lady of Guadalupe.

And in the middle of what was, at that point, semi-organized chaos, people began approaching Our Lady with a sense of calm and, in some cases, to pay respects in their own way. Several of the journalists and film crews present had their cameras fixated on her, strangely ignoring the far more “exciting” occurrences taking place all around.

As the numbers now in their thousands processed intrepidly up Park Lane towards Marble Arch and Oxford Street, I suspect the vast majority of those present hadn't felt so exhilarated in quite some time. That in itself is worth something, as huge swathes of society have been living in blanket misery for the best part of a year now.

I pondered on what role the Catholic laity, or indeed the clergy, should play in all of this and the answer seemed abundantly clear to me. It's beyond a shadow of a doubt that this lockdown is wrong! Not one iota of it is justified, and it never has been. But its installation was anything but spontaneous – as Jacob Rees Mogg (possibly England’s most famous Catholic, who last year voted to suppress the public celebration of Mass and impose fines on those who organize or attend Mass) has made clear: it has, at least to some extent, required the consent of the general public.

As Catholics, we know Holy Mother Church offers the only solution to this nefarious global tyranny. That is, the Social Reign Of Christ The King. Is it not imperative that we stand shoulder to shoulder with those who have the foresight to at least see a degree of the problem? Lest they see of the Church nothing but the locking of doors, the withdrawing of sacraments and a reflection of “woke” politics of the liberal society they find themselves imprisoned within.

Catholics are not called to endure decline, be it moral or social, but instead to fight against it. Pray the Rosary at home, yes, but never forget that prayer itself doesn't dispense from action. Today presents an opportunity perhaps never seen before, where so many in society have a distrust of both their government and associated media.

Those today opposing sinister global initiatives often describe themselves as “truth seekers,” belonging to what many now know as the “truth movement.” Such collectives have often had shady characters acting as the gurus, typically serving either their own egos, wallets, or even the state itself. Several of us agreed that compared to previous anti-lockdown events, Saturday just gone perhaps represented a new departure. The usual fringe issues, that quite frankly scare the average man off, didn't seem quite so prevalent at this event, if even noticeable at all.

Our Lady however had the opposite effect to these potential pitfalls, attracting questions, interest, and devotion alike. I think it's clear she wants us to play a public part in this.

Whereas Catholics have played a leading role fighting tyrannical globalism in Ireland, France, and Italy this past year, we have less of a demographic advantage in Britain. We need to work within our means and the realms of reality, whilst not shying away from the challenge.

Network with other likeminded Catholics, form small action associations, liaise with other such groups, and come together practically where appropriate and necessary. Assess and understand each others’ means and talents, and attribute roles accordingly. Study the relevant social teachings of the Church and related manuals. Let us step out and proclaim our King as Christ which, more than you might expect, will resonate with the inner nature of our fellow men.