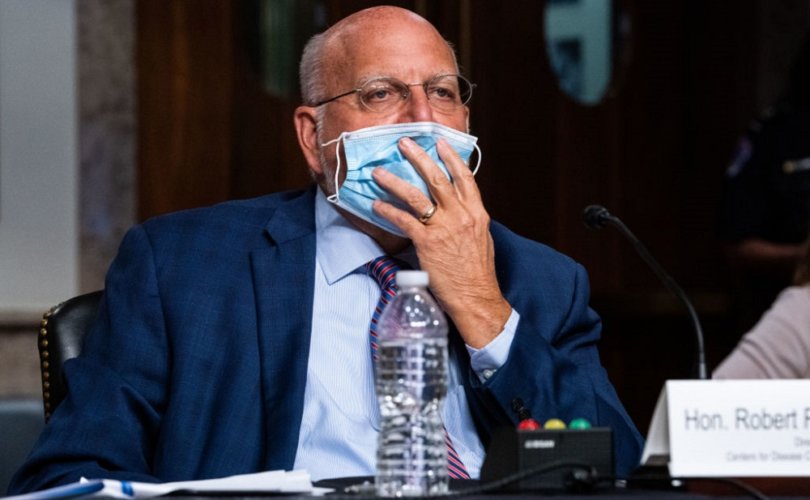 September 17, 2020 (American Thinker) — The CDC has had more prominence this year than usual, thanks to the Wuhan virus. However, when America looked to it for help, it wasn't ready, whether with tests or useful advice. Its lack of preparedness might have been because the CDC's been expending its time and your money training its people in Critical Race Theory (CRT) rather than disease control. And while I'm currently agnostic about a vaccination's efficacy (I need a lot more information), I'm also suspicious when the CDC's director, Dr. Robert Redfield, announces that his surgical mask is what will save him and what will save all of us.

Aside from being inherently distrustful of the CDC thanks to its epic run of errors and unpreparedness, I'm also suspicious about the timing of Redfield's attack on Trump's plans for the vaccination. The CDC just engaged in a small but significant power struggle with Trump. Days after Trump exercised his constitutional executive authority to end CRT seminars in federal agencies, the CDC announced that it would proceed with a mandatory 13-week CRT seminar. The administration has canceled the training, but it's clear that the CDC is at war with the administration.

There's one more reason why I'm skeptical about Redfield's praise for masks when he spoke before the Senate Appropriations subcommittee. I recently received an email from someone who specializes in masks, and he gave me some fascinating facts that I'll share with you (with my correspondent's permission).

Here's Dr. Redfield. Please note that the mask he's waving around is the classical surgical mask. It's thin and fits relatively loosely over the nose and mouth:

“These facemasks are the important, powerful public health tool we have— I might even go so far as to say that this facemask is more guaranteed to protect me against COVID than when I take a COVID vaccine.”pic.twitter.com/r7InIImX9u

To set the stage, the person who sent the email is a chemist who has worked in the filtration industry. He's helped develop masks used in medical and industrial settings. He also holds patents on several filters. As he says, “I know a little bit about filters.” That's why he believes that masks of the type Redfield is waiving around are useless:

Surgical masks were not designed as filters and were not intended to be used as filters. Surgical masks were designed to be used by surgeons standing face down over an operating table holding a patient with an open wound. The surgeon wearing the mask would be able to talk to others in the room without discharging spittle droplets into the patient's wound. Spittle droplets are large and can cause infection.

I witnessed a test of surgical masks. Small plaster particles were generated in a room. They were visible as a white dust in the air. A man was properly fitted with a surgical mask and spent a short time in the room. When he came out, the mask was removed. A camera was focused on the man's face. The entire area that had been covered by the mask was coated by the white dust. The camera showed that his nostrils and his mouth had been penetrated by the white dust. The dust particles were measured and found to be around 40 micrometers in diameter. The particles that penetrated the mask were the same diameter.

Covid-19 virus molecules are about 0.1 micrometers in diameter. That is 400 times smaller than the plaster particles that penetrated the mask.

Surgical masks will not prevent the wearer from inhaling or exhaling viruses or bacteria. They provide absolutely no protection for either the wearer or anyone nearby. They create a very dangerous false sense of security for everyone. They also force the wearer to rebreathe carbon dioxide, which will, over time, reduce the wearer's blood oxygen level. That can become very dangerous, especially for older people.

This farce is being promoted by sleazy politicians who believe that if they can convince people that they are protecting them or creating a safe environment for them by pushing this mask farce, those people will re-elect them.

All politicians pushing this dangerous mask farce should be voted out of office as soon as possible.

I'm already starting to hear anecdotal evidence that students are getting fungal and bacterial infections thanks to the masks they have to wear all day (especially because students don't keep their masks very clean). This is worrisome because the front of the face is called “the triangle of death” because it's close to the brain. When a doctor who has government power at his back waves around a mask that has no utility and can cause bad infections in vulnerable areas, I start to worry.