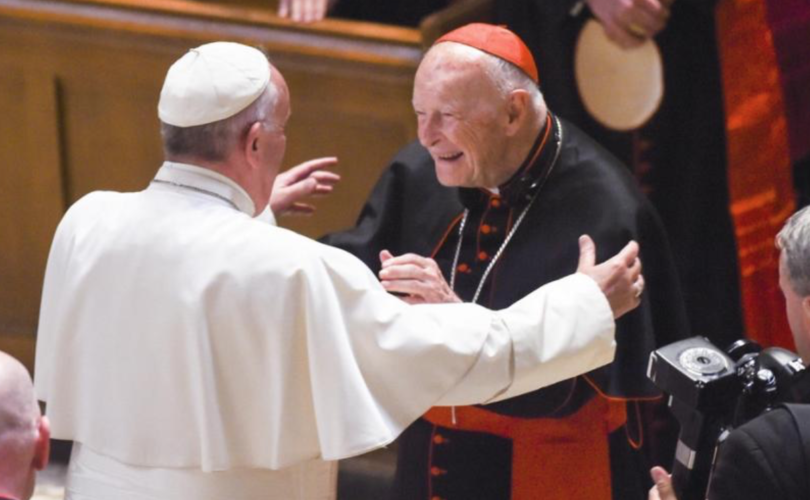 October 29, 2018 (The Wanderer) – On Sunday, April 3, 2005, the day after the death of Saint John Paul II, Theodore Cardinal McCarrick and at least a dozen other priests concelebrated the ten a.m. Mass at Saint Matthew's Cathedral in Washington. In attendance were, among other dignitaries, Secretary of State Condoleezza Rice and Massachusetts Senator Ted Kennedy.

Cardinal McCarrick came out to the pews before Mass, fully vested except for his chasuble, and greeted Senator Kennedy warmly.

After the Mass, as the celebrants processed out, Senator Kennedy stood up and took Cardinal McCarrick's arm. Beaming, they strolled arm in arm down the aisle towards the exit.

At the time, I interpreted this charade as just another clever, cynical, and defiant public confirmation of what we already knew. Kennedy was the most powerful Catholic pro-abortion pol, and McCarrick the most powerful prelate in country. The message? Don't worry, bishops won't criticize pro-abortion politicians because they need the federal money (McCarrick went on to confirm that accord in a speech to the Canadian Bishops' Conference a year later). In order to seal the deal, bishops would be silent about the entire teaching of the Church dealing with sexual morality.

Filthy lucre for silencing the truth? Sure. But in retrospect, that constitutes only a crass sidebar to the deeper message of the pompous gesture's significance as we look back on it today. What was in fact happening was more lethal: from the heart of the American Church, “Uncle Ted” was signaling to every bishop and every politician that the natural law was “inadmissible” (the term is Pope Francis', from his recent Death Penalty diktat). That is to say, what the brilliant Mary Eberstadt has called “the elephant in the sacristy” would stay in the sacristy and keep on wrecking it. Actively homosexual clerics were secure: they need not fear retribution from either the hierarchy or their purchased political friends. And pro-abortion Catholic politicians everywhere need not fear that their bishops would call out publicly their persistence in manifest, grave sin.

The stage-managed PR stunt was rich in symbolism. It was intentionally pulled off in front of the nation's highest-ranking dignitaries at the foot of the capital's highest altar. It represented the culmination of years of scheming by conspirators bent on destroying the Church's laws that are designed to protect the Eucharist from profane desecration.

How did he get away with it? Scholars and churchmen will be examining the impact of the sordid Saga of Uncle Ted for years. For now, written in broad strokes, one conclusion is inescapable: he was just too powerful to stop.

In April 2003, McCarrick was heading a bishops' task force that was studying how to handle Catholic politicians who defy church doctrine. This is not a misprint – imagine that! The marauding monster McCarrick, leading the American Catholic Church to address what should happen to those who persist in manifest grave sin! Do you remember the results of that study? Neither do I. Anyone interested can merely observe Uncle Ted's Wedding March with the Churl of Chappaquiddick, Baby-Killer Ted, a year later, and draw their own conclusions.

And what about that “task force”? Another ten years later, Timothy Cardinal Dolan figured that it was finally safe, meekly to admit that most bishops had decided that they wouldn't “go to the mat” to follow Church law on Canon 915. After all, who's going to stand up to “Uncle Ted,” the Master of the Universe? Cardinal Dolan also acknowledged that the bishops had suffered from “laryngitis” for fifty years. That's why they hadn't taught any other tough moral truths of the Faith either.

While the liturgy and the teaching were collapsing, while some fifty million Catholics left the pews, the “leaders” of the Church continued to conspire – well, let's say they continued to “work together.” After all, way back in 2002, meeting in Dallas to deal with the abuse-and-cover-up scandals, they knew that well over half of their brother bishops had enabled abusers. McCarrick led the group that engineered the “Charter for the Protection of Children and Young People,” making sure that he and his brother prelates were exempt from its harsh provisions.

On the eve of those deliberations in Dallas, CNN interviewed McCarrick, reflecting the fact that he was indeed the most powerful man in the room. What about the scandals? Over 2/3 of the bishops protected abusers, CNN anchor Kyra Phillips said.

“Well, I think there's a great deal of progress being made,” McCarrick told her. “I pray that ultimately it will resolve this very, very serious and very tragic trauma that the Church is going through at this time.”

Well, it turned out to be a lot more serious than McCarrick and his colleagues wanted it to be – but they went home to their safely circled wagons as the fire and brimstone rained down for years.

No bishop was going to call out McCarrick and the dozens of other guilty bishops for their role in the scandals, but they recognized the facts: everything could fall apart, so they fell in together.

In 2006 they took another step to consolidate their position. It was in that year, as the indispensable Phil Lawler reports, that “a group of corporate leaders met with American prelates to educate them regarding 'the best tools of modern management – detailed budgeting, comprehensive financial disclosure, human resource policies that reward high performers….'”

“High performers”? Why of course, that referred to the prelates in the room, didn't it? They were supposedly the USCCB's best and brightest, since they constituted the “Administrative Committee.” They had arrived at the top of the heap by implementing their own “best practices,” of course. They weren't about to change a thing. When they met with those experts, these Church “leaders” were conducting opposition research, plain and simple. They wanted to know every possible way they could be exposed by genuine “best practices” – and prevent it at all costs. Accountability and full disclosure were the enemy.

Well, that “Administrative Committee” ran the USCCB, remember. We now know that two of its five members were practicing homosexuals, two more were “gay-friendly,” and the fifth dismissed abuse crimes in his diocese as “boundary violations.”

And everything that the prelates learned from those earnest laymen was put to use protecting the SSS – the Secret Sodomite Society inside the hierarchy, the USCCB, the seminaries, the chanceries, the NGOs, the universities – everybody.

Need I add that McCarrick chaired the committee?

Not to worry. Everything was under control. The free fire zone would continue unabated, unchallenged, and uncorrected. And indeed it has. In the year that celebrates the fiftieth anniversary of Humanae Vitae, it collapsed.

That happy confluence did not come about by happenstance. Millions of the faithful worldwide have been praying for the revival of the Church's teaching on sexual morality, marriage, and the family. But the bishops' deal with the pols and the broader secular culture had worked throughout the fifty years. They had ignored the laity, covered up their crimes, and celebrated their pro-abortion supporters with impunity. Why, it could easily have gone on for another fifty years!