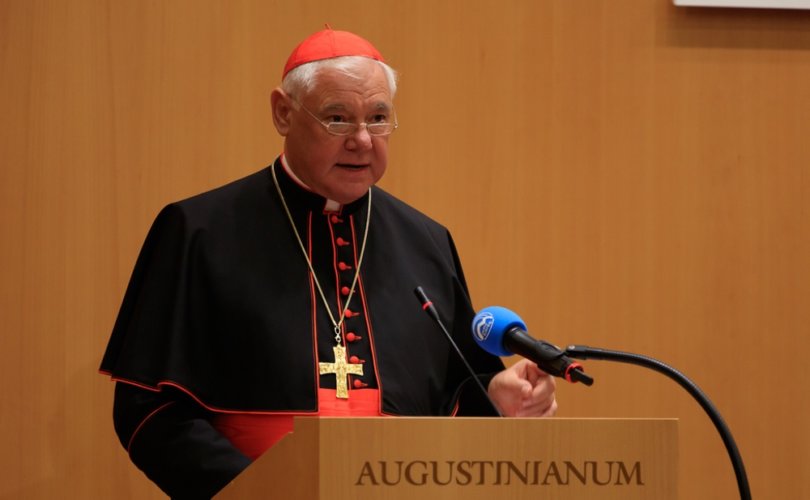 (LifeSiteNews) – It is good that the official statements of Cardinals Ladaria and Ouellet regarding the ad limina visit of the German bishops have now been published. Because mature Catholics have a right to know what concerns have been expressed by the Roman Magisterium about the openly heretical and schismatic texts of the German Synodal Way.

The word of the two cardinals carries weight not only because of their office but also because they are differentiated statements by recognized theologians. In contrast to the vociferous majority of the synodal companions, they know what the Catholic faith is about and how truth and error are to be distinguished from one another in Catholic theology.

It is no coincidence that the Second Vatican Council is quoted with the fundamental insight that God’s self-revelation in Jesus Christ is given in all its fullness and is made present in the Holy Spirit through the Church by means of Holy Scripture, Apostolic Tradition, and the Church’s Magisterium in an unabridged and unadulterated form (cf. Dei verbum 1-10).

Instead of launching a thoroughly mendacious wave of slander against Cardinal Koch according to the motto “Stop the thief!”, it would have been more honest to deal with his arguments in Rome, which was, however, embarrassingly avoided by its operators, due to a lack of professional competence.

— Article continues below Petition —
PETITION: We won't give any money to liberal bishops who attack the Faith
Show Petition Text
11644 have signed the petition.
Let's get to 12500!
Thank you for signing this petition!
Add your signature:
Show Petition Text

The thesis of the Theological Declaration of Barmen (1934) against the “German Christians”, who, by the way, were already up to their mischief before the Nazi era, is and remains relevant for Catholics of today:

The Holy See’s July 21, 2022, statement put it this way: “The ‘Synodal Way’ in Germany does not have the authority to oblige bishops and faithful to adopt new forms of governance and new orientations of doctrine and morals.”

It is also telling that the members of the German Bishops’ Conference and the Synodal Way who are highly qualified in dogmatic theology [and oppose the Synodal Way] belong to the (defamed) minority who have little chance with their reasonable arguments against the ideological blindness of their colleagues. The two highly qualified texts of Cardinals Ladaria and Ouellet will suffer a similar fate. They are on the one hand too noble in tone and on the other hand, their theological level is too high to achieve rethinking among their addressees.

In the internal circle, they were dismissed with a contemptuous hand gesture as retiring dropouts (“soon to be gone”) just as it was signaled that the objections of the Pope will be swept off the table with the same trick as his “Letter to the Pilgrim People of God in Germany” (2019) was sunk in a spiral of silence.

If any proof was needed for this perfidious refusal to recognize the Roman Magisterium (cf. Lumen gentium 18; 23), one did not have to wait long. Two days after its return from the tombs of the apostles, the DBK [German Bishops’ Conference] has moved the church’s labor law in the direction of the atheistic-materialistic conception of man in accordance with the LGBT ideology, in complete contrast to Christian anthropology.

The president [of the DBK] stubbornly insisted on his demand for the ordination of women, as if the doctrine of the faith of the Church did not have to be derived from objective criteria, but was formed by those who continuously and incessantly demanded to change it. Other bishops, in typical German presumptuousness and arrogance, with which they feel superior to the Pope and large parts of the world episcopate, insist to remain on the road to the abyss.

Many faithful Catholics in Germany and all over the world wonder whether the proponents of the German Synodal Way seriously believe in a renewal of the Church of Christ by relativizing the historical, salvific self-revelation of God in His Son Jesus Christ and by trying to sell us the blatant violation of the divine commandments as their liberating reinterpretation.

Without going into the individual serious errors of the so far published Synodal texts regarding the questions of the doctrine of faith and morals of the Catholic Church, the following explanation seems reasonable to me: The main goal of the whole campaign is the preservation of Christianity as the civil religion of the secular state and of the largely religiously agnostic and indifferent society as a whole. Therefore, one offers itself to the “modern world” – whatever that is supposed to be – as a socio-psychologically useful religious and social service organization.

One pretends that the Church was not founded by God to be the sacrament of salvation for the world in Christ (Lumen gentium 1; 48; Gaudium et spes 45), that it therefore in no way has to legitimize itself before atheists in regard to its expediency for the welfare state or an earthly paradise of socialist (Red Chinese model of society) and capitalist character (Great Reset by 2030).

Everything that does not fit into this classification of the Church as a mundane program to make mankind happy is concealed outwardly in this master plan of self-secularization and reinterpreted inwardly in order to avoid any contrast or even prophetic contradiction to “humanism without God” or nihilistic posthumanism.

Thus, according to the aforementioned decision on church labor law, it is possible to somehow represent the “loving God” (in the deistic sense, the “Father above the stars”) even with a lifestyle that is contrary to the commandments of God and the discipleship of Christ, and at the same time still serve the (mundane) goals of the Catholic Church. One would only have to accept the Church as a socially useful organization, while at the same time being allowed to deny the mystery of its divine origin, its sacramental nature, its instrumental need for salvation, and its universal mission.

The only members who – according to this secular logic – deserve to be driven out of the Church are only those Catholics (“fundamentalist”, “traditionalist”, “conservative-rigid” etc.) who are still faithful to their baptismal creed. And only those bishops who remain faithful to their baptismal creed are maliciously defamed in Rome as the cause of the campaigns instigated against them in their own dioceses, and systematically discredited by their confreres. During the ad limina visit, “false brothers” (Gal 2:4) did not hesitate, in the presence of the Archbishop of Cologne, to coerce the Holy Father into a blatant breach of the ius divinum [divine law] of the episcopate, namely that he should depose a bishop of integrity – just to satisfy the hunting instinct and the drive for power of ideologues who have long since broken with Christianity in the deeper sense of being like-minded with Christ.

To the propagandists of a secularized church that has distanced itself from Christ, who want to cast out the violations of the natural and revealed anthropology and sexual morality by destroying it, like casting out the devil with Beelzebub, the author of the letter of 1 John writes: “All that is in the world, the lusts (concupiscentia) of the flesh, the lust of the eyes and pride, is not of the Father, but of the world. The world perishes with its lust; but he who does the will of God abides forever.” (1 John 15ff).