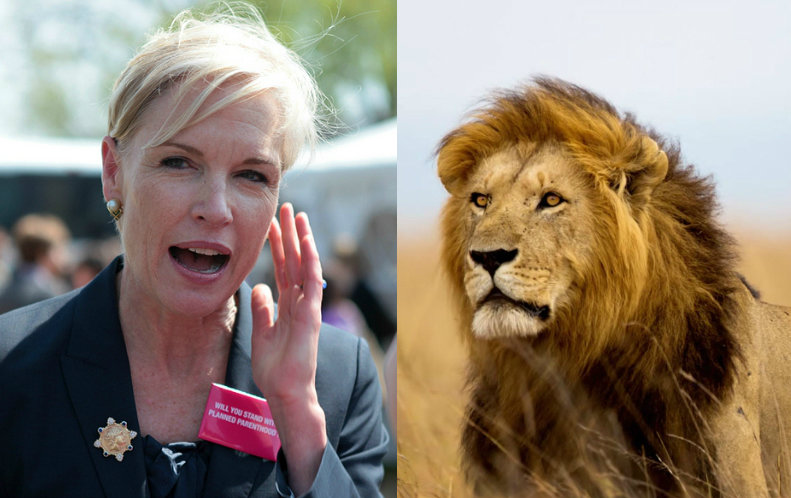 Cecile Richards, President of Planned Parenthood, and Cecil the Lion.

July 31, 2015 (TheRadianceFoundation) — Society has a funny way of deciding when to express outrage.

Millions of innocent humans (aka pregnancy tissue) are slaughtered and their fully intact body parts are sold. Crickets.

A single lion, which most have never heard of, gets hunted for sport. International drama.

I despise the thought of big game hunting, but it never ceases to amaze me how rhetorically violent animal rights activists become when these creatures are harmed or killed.

(2/5): Because shooting #CecilTheLion in the park would have been illegal, he needs to be extradited, charged, &, preferably, hanged.

PETA (People for the Ethical Treatment of Animals) has called for the hunter involved, Dr. Walter Palmer, to be hanged. The puppy-killing, celebrity-studded, publicity-stunt-centered organization epitomizes the insanely hypocritical, progressive approach. The death threats through Yelp and Twitter are repugnant, but unsurprising given their disdain for human life.

Celebrities have tweeted their utter disgust for the wealthy dentist. Debra Messing (Will & Grace, Mysteries of Laura) says: “I want them to take his citizenship away.” Sharon Osbourne hopes that “#WalterPalmer loses his home, his practice & his money. He has already lost his soul…#WalterPalmer is Satan.” Piers Morgan, proving that being a news journalist was never his forte, tweets: “I’d love to go hunting for killer dentist Dr. Walter Palmer, so I can stuff and mount him for MY office wall.”

Jimmy Kimmel even nearly melted down talking about it on his show, having to pull himself together to make it through the segment.

Oh, and look…the Obama administration is now offering its help into the investigation of Palmer’s hunting escapade. According to The Hill: “The Service is deeply concerned about the recent killing of Cecil the Lion.” Wow. That was quick.

Planned Parenthood’s baby-parts-trafficking elicits nothing but support from the Obama administration. But kill a lion halfway across the world, in a nation riddled with grotesque human rights abuses, and the administration is on it! (Well, on the abuses to lions, not to Zimbabweans). Cecil the Lion’s death warrants outrage from the political left, but their darling abortion mogul–Cecile The Lyin’–can do no act heinous enough (like selling “unwanted” babies’ wanted organs), no Medicaid fraud egregious enough, no teen sex education misleading enough to stir a moment of discomfort for liberals.

Cecile Richards (aka Cecile The Lyin’) continues to con the American public on national television, slander the Center for Medical Progress (CMP) and those who’ve done the investigative work that mainstream media is supposed to do, lie about Planned Parenthood providing “basic healthcare”, and deny that aborted babies’ organs are being sold by her billion-dollar abortion empire. She complains about what is an inherent part of news: heavy editing. There is no news brought to the American public that isn’t “heavily edited”. CMP, unlike the news media, has provided the entire footage of each investigation. I tried requesting that of NPR (aka National Pro-Choice Radio) in my debate with the Religious Coalition for Reproductive Choice, and they weren’t having it.

When The Radiance Foundation originally launched the  TooManyAborted.com billboard/social media campaign, we highlighted the hypocrisy of progressives. They tend to melt down when animals are threatened, yet feel threatened by the very existence of human beings, especially the unborn. The same year one branch of the federal government conjured up a Constitutional right to kill a certain group of humans, for any reason and throughout the entire pregnancy…another branch of government passed a bill to protect life…animal life. In 1973, the Supreme Court authorized human killing through Roe and Doe while Congress made it illegal (punishable by fines and imprisonment) to harm or kill certain animals through the Endangered Species Act. We can kill our own, but hell will break loose if we kill any other creature.

This is why our first billboards illuminated that tragic hypocrisy: Black Children Are An Endangered Species…TooManyAborted.com. And the outrage, from progressives, was over the use of the word ‘species’, not the violence and injustice of abortion. Instead of feeling foolish because they didn’t know the definition of the word, they railed against a black man calling black children (now aborted at 5 times the rate of the majority population) an “endangered species”. We are, after all, the human species.

Cecil the Lion’s death reveals how our society will get all worked up over cuddly little animals or majestic beasts lured out of their sanctuaries, but yawn when the sanctuary of the womb becomes a killing field over 3,000 times a day. Actor and comedian Ricky Gervais laments the feline’s demise on Twitter with a photo of Cecil and these words: “I’m struggling to imagine anything more beautiful than this.”

Uh, how about a human being? How about the most defenseless and most precious resource we have? Out of the 57 million slaughtered since Roe, millions would have grown up to simultaneously value the lives of animals and humans. Famed anthropologist, Jane Goodall, hoped that Cecil the Lion’s death would have people’s “eyes opened to the dark side of human nature.” Sadly, like many other animal rights activists, her love for other species doesn’t apply to our own, revealing a disturbing dark side that demonizes humankind. “It’s our population growth that underlies just about every single one of the problems that we’ve inflicted on the planet. If there were just a few of us, then the nasty things we do wouldn’t really matter and Mother Nature would take care of it — but there are so many of us,” laments Goodall, an official patron of the radical pro-abortion, pro-population-control organization, Population Matters.

What Dr. Palmer did was disgusting. The willful ignoring of the destruction and trafficking of aborted babies’ parts is far worse. What Big Abortion does, every single day, is beyond reprehensible. Humanity deserves more outrage when it is callously exploited, destroyed, and sold for its internal organs. Whether it’s jars of severed feet in Gosnell’s office or a $583k annual salary for Cecile The Lyin’, the slaughter of human lives should never be a trophy.