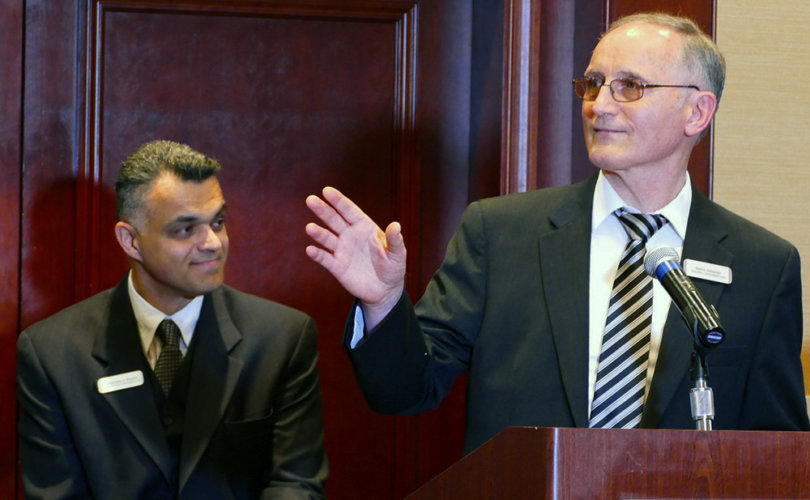 (LifeSiteNews) – In a quarter of a century, LifeSiteNews has grown from a tiny news service spreading pro-life truth during the advent of the internet to being a world leader in hard-hitting journalism.

LifeSiteNews staff members have worked tirelessly behind the scenes preparing for tonight’s celebration, our 25th anniversary gala. Our last gala was in 2017, when LifeSite turned 20, and since then our staff has greatly expanded. The planning for tonight’s event has been a gargantuan task for the many departments within LifeSiteNews. Indeed, the logistics just for the LifeSite staff attending this year’s gala are enough to make one’s head swim.

Our “Celebrating 25 years of LifeSite” series in anticipation of tonight’s gala has been a fun dive into LifeSiteNews history. But it’s truly only scratched the surface. There are many more inspiring, sometimes miraculous stories, in which LifeSite has played a vital role. We hope to continue sharing these stories from our history with our readers.

We are blessed with bright, kindhearted, faithful colleagues who are committed to the pursuit of truth in charity, and percipient leaders in our founders, John-Henry Westen and Steve Jalsevac. But we are also blessed with astute and loyal readers. To everyone tuning into the gala virtually tonight, whether you are a longtime reader or only recently discovered LifeSite: welcome!

Steve and John-Henry are both Catholic reverts. Talking to either one of them about some of the things they’ve witnessed firsthand in the pro-life movement and in the Catholic Church is fascinating.

Our readers know that we support the pro-life heroes around the world who bravely defend human lives at abortion centers everyday, and our connection to these heroes is very real. If you haven’t read it yet, then read here about the time when LifeSite co-founder Steve Jalsevac was arrested while reporting at a pro-life protest in Toronto. We are also delighted that the pro-life hero Joan Andrews Bell will be among the attendees at our gala this evening.

Our readers will also know that LifeSite reporters aren’t afraid to call out leaders in the Church who fail to defend the lives of the most vulnerable. One of the most disheartening things to witness in recent years has been the platform offered to major pro-abortion figures to speak at the Vatican. In 2017 John-Henry spoke for all of us at LifeSite when he called out famed population control advocate Jeffrey Sachs as a “pro-abortion globalist” during a conference at the Vatican.

Reading Steve and John-Henry’s blog posts from years ago makes them seem nothing short of prophetic.

LifeSite has frequently been way ahead of others in our reports, something we can only credit to an openness to the Holy Spirit. So much has happened over the past two and a half decades in the spheres of bioethics, faith, and freedom – and LifeSite has been on the frontlines of those battles – that a person uninvolved in the great moral conflicts of our time might glance at our massive archive of articles (or just the headlines on any given day) and feel completely devastated, shocked or in pure disbelief.

As Steve wrote in 2016, “The news business can be fast-paced and draining – especially given our focus on difficult and controversial issues like abortion, euthanasia, homosexuality, pornography, the growing attacks on our freedoms, complex theological issues, the intricacies of Vatican politics, and others.”

That remains even more true today…but despite the dark and often very depressing news we cover, LifeSiteNews is actually a very joyful and happy work environment. Every meeting starts with prayer. There is a sense of camaraderie amongst all of us and when we get together in person, there is much merriment and laughter.

And we, like our faithful readers, know where – or rather, Who – our hope comes from.

At LifeSite we are blessed to work for an organization whose aim is to do as much good as possible through each of the articles and videos we publish.

The Celebrating 25 years of LifeSite series has highlighted some of the most visible ways we’ve been able to impact the culture. But there are so many stories that we don’t know and might never know about. Remember, LifeSite isn’t only read by those who agree with us but by those who disagree with us too.

In 25 years, how many people will have been influenced by our reporting to reconsider their views on abortion, euthanasia, or other life and death issues? How many people have been inspired to heroic acts of courage to defend the most vulnerable in society?

Twenty-five years after its founding, LifeSite’s work has never been needed more than it is now. In a world gone mad, our reporting is a voice of sanity, often conveying hard truths but always aiming to do so in charity.

We will never know the whole reality of the impact of our work, but we know that it is desperately needed and that we are blessed to be doing it.