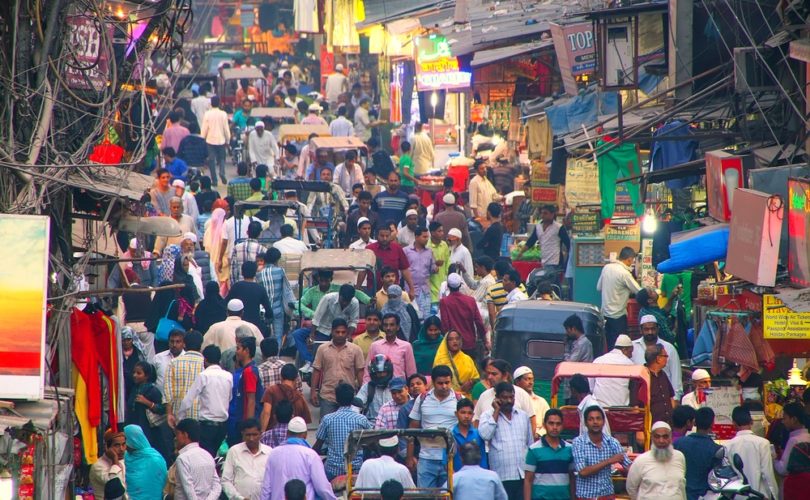 May 4, 2021 (LifeSiteNews) – Virtually every news outlet has been screaming about the incredibly high rates of COVID victims, hospitalizations and deaths in India. Missing in these countless stories is awareness that the cause of the COVID surge could be connected to the reduced use in India of two proven generic drugs for treating and preventing COVID: first it was hydroxychloroquine and later ivermectin.

As a proponent of using these two medicines I have reviewed the strong real world data showing their effectiveness to cure and prevent COVID in Pandemic Blunder. Anyone honestly following the science would have to conclude that both of these medicines really work.

During 2020 and the first months of this year the COVID pandemic in India by all accounts was not at all devastating. And careful examination of the good news was that those two generic medicines had been widely provided to the population. Then the COVID vaccine movement hit the world and the terrible COVID surge hit India.

The mainstream media waged a war against early home/outpatient COVID treatment successfully used globally with those two generic medicines, both with very long histories of safety. Now the same media finds it appropriate to focus attention on all the bad news in India. But why have the media ignored the evidence that the India surge could be connected to the government dropping its wide use of ivermectin in recent months?

Why would this happen? Certainly, all the negative media coverage of ivermectin could have caused the India government to switch its priority to vaccines.  If so, it has proven to be a blunder of epic proportions with many hundreds of thousands of Indians suffering and dying.

Sadly, it is difficult to find substantial interest in examining the possible role of reduced use of ivermectin in these dark days of the COVID pandemic in India.

This senior physician also noted this about ivermectin use: “This drug is now being commonly used in various states in India.”  This too was noted: “Indian medical institutions have started giving COVID-19 patients Ivermectin off-label.  Medical institutions across the nation are also giving the drug as a prophylaxis against the novel coronavirus.  This is being seen in several states of the nation including Uttar Pradesh and Maharashtra.  Dr. Tripathi, in a conversation with Financial Express revealed that the drug has been in use for over nine months now without major side effects being reported.”

A sound analysis appeared in an obscure blog on April 26 titled “When India stopped prescribing Ivermectin and started vaccinating the deaths shot up.”  Here are its key observations: “Back in January, all talk was about Ivermectin, a cheap and effective remedy being used in India.  However, the attention went onto the vaccine and since then the deaths have gone up and up and there are indications this might be repeated elsewhere.”

This story cited a January 2021 article that emphasized: “India has developed a ‘miraculously’ effective and safe COVID-19 treatment kit which costs merely $2.65 per person and has helped put the nation’s case and fatality rates in “steep decline.”  Also noted was that a protocol incorporating ivermectin “has led to up to 83% lower-than-average COVID-19 death rates in hospitals that have applied it.”

In many parts of India they began treating coronavirus patients early, including with the use of hydroxychloroquine (HCQ).  Dr. Makarand Paranjpe and his wife, both 77 year-old Indian physicians, fully recovered from the COVID-19 virus using early treatment last November, Trial Site News reports. She used hydroxychloroquine, and he took ivermectin.

Following the June 2020 discovery of ivermectin’s efficacy in treating the virus, along with significant subsequent testing, the largest state in their nation, Uttar Pradesh (UP) (pop. 230 million) announced in August 2020 that it was replacing their HCQ protocol with ivermectin for the prevention and treatment of COVID-19.

“By the end of 2020, Uttar Pradesh — which distributed free ivermectin for home care — had the second-lowest fatality rate in India at 0.26 per 100,000 residents in December.  Only the state of Bihar, with 128 million residents, was lower, and it, too, recommends ivermectin,” according to Trial Site News.

By further comparison, utilizing early treatment with HCQ and ivermectin, the densely populated India, which has four times the population of the U.S., has less than half of the coronavirus related deaths.

Here is the latest big news from India. The national government has faced reality. Jerri Lynn reported on Sunday [May 2] “the huge uncontrolled wave of infections hitting India is having all sorts of implications for the Modi government. In its desperation to regain control of the virus, India’s government quietly changed its treatment guidelines last week. The new guidelines include the option of prescribing two repurposed medicines for mild Covid patients: budesonid and ivermectin. The former is an inhaled steroid that has been shown to reduce the time to recovery and need for urgent medical care.”

Also noted was that “Uttar Pradesh (UP) did more than treat 300,000 mild cases at home through 2020; it also opted to use ivermectin to prevent infection. COVID response teams began taking the drug and they did not catch the illness. U.P. then had contacts of COVID patients take it, with similar success.”

But here is the ugly reality: “Yet UP’s remarkable success at controlling the virus did not inform national policy — at least not until now.  The Indian Council of Medical Research declined in October to recommend ivermectin nationwide, citing, like so many health regulators, the need for more data.  But all that changed last week as India became the biggest country on the planet to adopt nationwide use of ivermectin against Covid-19.”

What had happened to kill wide use of ivermectin not just in India but in the U.S. and many other countries? Meanwhile there are continued calls by many organizations, including the National Institutes of Health, FDA and the World Health Organization, for yet more studies in the use of ivermectin to treat and prevent COVID.  This is sheer nonsense.

Has the profit-seeking drug industry in India and elsewhere pushed the use of vaccines and knocked out wide use of cheap generics?

If so, it should be clear that trying to quickly vaccinate most of the global population is crazy, especially compared to the ability to quickly promote and facilitate wide use of protocols based on both hydroxychloroquine and ivermectin.

The U.S. government should learn from the proper but belated action by the India government.  Too many Americans have suffered and died needlessly.  With over 570,000 COVID related deaths and more every day, the blocks to using ivermectin and hydroxychloroquine should be removed.

Dr. Joel S. Hirschhorn, as a full professor at the University of Wisconsin, Madison, directed a medical research program between the colleges of engineering and medicine. At the Congressional Office of Technology Assessment and the National Governors Association, he directed major health-related studies. He has testified at over 50 U.S. Senate and House hearings and authored hundreds of articles in journals and on websites, plus op-ed articles in major newspapers. He has been an executive volunteer at a major hospital for more than 10 years. His newest book is PandemicBlunder.