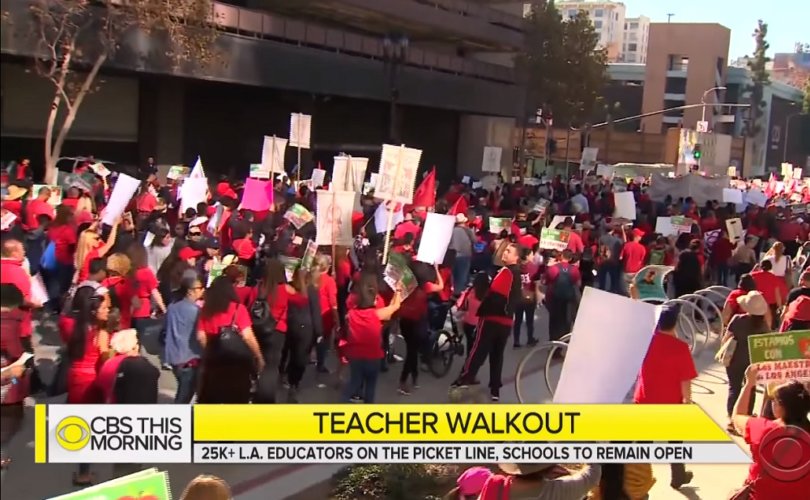 A teacher demonstration in Los Angeles.CBS This Morning via YouTube.

March 4, 2019 (American Thinker) — For the first time in a generation, there is labor unrest in America's public schools. Strikes in Los Angeles, Denver, Oakland, and West Virginia as well as threatened strikes in other localities are more than teacher unions flexing their muscles to get more pay and benefits for their members. At issue everywhere is the success of charter schools and the perceived threat they pose to the nation's public schools.

Indeed, Ray Domanico of the Manhattan Institute points out that the increased activism of the unions is occurring as the Democratic Party is drifting ever farther leftward.

What's behind the recent spate of teacher strikes from Los Angeles to Denver, West Virginia, and Oakland? Local issues like across-the-board raises and increased educational spending are certainly a big part of teachers' demands, but they could have been fought without a strike. The larger issue at play, and the real reason for these strikes, is a shift in the landscape of the party the teachers' unions have always called home.

The Democratic Party continues to drift away from centrist ideas and toward a more “progressive” approach to labor and education, and teachers' unions are prepared to exploit this shift. In a very real way, the teacher strikes across the country serve as a signal to the progressive left within the Democratic Party that union support is contingent on falling in step with their demands. Gone are the days of Obama-era bipartisan support for charter schools, teacher accountability, and merit pay. In addition to increased school spending, that means ending the use of merit-based pay and hindering the growth of non-union charter schools, and the progressive left, for better or for worse, is prepared to acquiesce.

That acquiescence runs counter to the interests of some of the Democrats' core constituencies:

The unions' move against charter schools, however, is deeply misguided. This move puts them in direct opposition to the exact families who are traditionally a core constituency of the progressive wing of the Democratic Party. These working class and low-income black and Hispanic families constitute the vast majority of those who choose to send their children to high-performing charter schools in urban areas.

The threat posed by charter schools is not just in drawing students away from public schools. It is an existential threat in that the unions know that if they institute the kinds of reforms that work in charters, their power will be broken.

Charter schools around the country, especially those structured to provide an education based on the classical model, have succeeded in improving the educational opportunities and achievements of those lucky enough to be enrolled in them. That fact that has remained as steady over the years as the low reading scores posted by the public-school system. What has evolved is the tenacity of the opposition from the local public school boards over which the teachers' unions exert so much control, and from whom desperate parents must seek a blessing for a charter.

Rules designed to inhibit the creation and operation of charters are being augmented with other impediments won by unions in recent strikes:

The school boards' objections are typically couched in concerns that the charter, for one reason or another, will fail to meet the board's standards regarding discrimination, generally meaning not that the charter will not discriminate among applicants but that it cannot guarantee a student roster consisting of X percent of this or that minority or identity group. But the real fear is likely what it has always been when it comes to charters: that if they graduate too many students who don't do drugs, find themselves in trouble with the law, or get pregnant (or get someone else pregnant), and instead can read and write; know something of Plato, Aristotle, and Socrates; and feel some sense of gratitude when they hear Beethoven or read the Bill of Rights, the result could be an exodus from the underperforming public schools to the excelling charters, and with it a concurrent diminishment of union power.

Serious improvement in educational delivery may be at the point now of examining options to emancipate school choice from the fetters of the union-dominated school boards, which have a vested interest in the status quo and an ideological opposition to traditional, effective education, the learning of knowledge for its own sake and the passing along of our patrimony. A battle was lost in Colorado, but it is a long war and it will continue, for there is a great deal at stake.

The assault on charter schools goes hand in hand with the war against homeschooling. The goal is to make pulling your child out of traditional public schools as difficult as possible. For the unions, it's a matter of survival. There is a notion that if they allow the formation of charter schools and educating children at home, the public schools will be left trying to educate the poorest, the most problematic children. I think that's a straw man argument, but it appears to be working.

Every charter school is not excellent, nor is homeschooling the answer for everyone. It's all about choice. And taking choices out of the hands of parents is a loss of freedom and a loss for quality education in an age when dumbing down the education of our children has become a specialty of teacher unions.