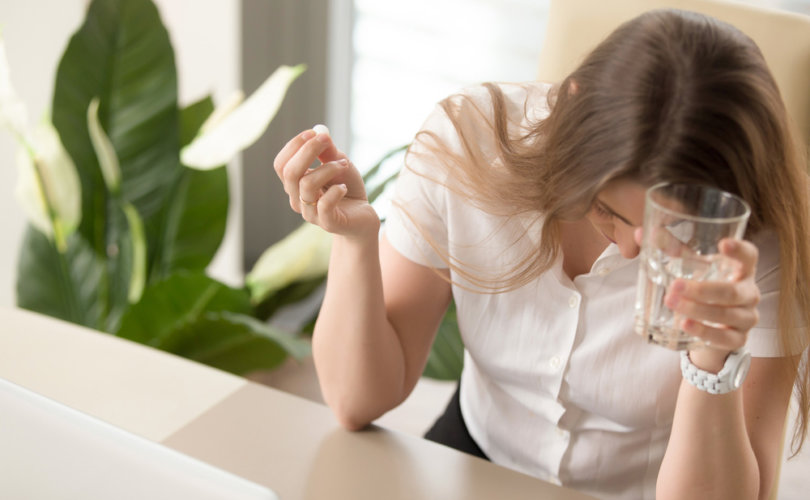 December 14, 2017 (LifeIssues.org) – A recent study analyzed the safety and efficiency of chemical abortion pills that are available online.

The drugs are better known as RU 486 (mifepristone) and Cytotec (misoprostol). Chemical abortion is a two-drug process; first mifepristone kills the tiny developing baby and then misoprostol causes uterine cramping to expel the dead preborn child. The FDA has expanded approval of the two-drug approach through the tenth week of pregnancy. The World Health Organization (WHO) believes they can be safely administered after 12 weeks, which is wholly unsupported.

The study was conducted by Gynuity Health Projects. According to their website, they work “globally to ensure that reproductive health technologies are widely available.” By “reproductive health” they mean abortion. Gynuity’s particular focus is on poor nations and cultures.

Gynuity’s “findings” were published in the journal Contraception, the flagship journal of Planned Parenthood Federation of America and its allies. The very same day a summary of findings was posted in an online article by Rewire, which states it is committed to “evidence-based news, analysis, commentary, and investigative reporting on reproductive and sexual health, rights and justice.”

Again, reproductive health means abortion. Do you note a trend?

Gynuity ordered mifepristone and/or misoprostol from 20 websites. They then analyzed a small percentage of the pills to see if they would be effective in killing an unborn child. These pro-abortion entities must still be dizzy from spinning the results to support their political agenda. “Our study found no evidence that…mifepristone and misoprostol products sold online were dangerous or ineffective.”

Further, the researchers appeared to encourage abortion providers and advocates to utilize the internet “for enhancing access to safe and effective abortion in the United States…”

Charles Donovan, president of the Charlotte Lozier Institute and Donna Harrison, MD, executive director of the American Association of Pro-Life Obstetricians and Gynecologists, did an analysis of their own based on the published study and resultant Rewire article. It’s safe to say that they came to a far different conclusion. Here are some highlights.

All of the chemical abortion drugs were obtained without the requirement of a prescription, proof of pregnancy or confirmation that the pregnancy was not an intrauterine (such as a tubal) pregnancy. Another key safety factor was lacking—a requirement to provide the gestational age of the baby, which is crucial regarding the abortion pills’ effectiveness and safety.

The mifepristone pills that Gynuity’s analyzed were within eight percent of WHO’s unsupported recommendation of safety after 12 weeks. Misoprostol, the secondary drug, “varied more considerably.” That’s a whopper of an understatement. The pills were labeled 200 mcg but the actual amount of drug in them ranged from 34.1 mcg to 201.4 mcg.

25 percent of the pills contained less than half of the recommended dose!

Compounding the risk to women, the researchers suggested this wide variation didn’t “necessarily render a product ineffective for terminating a pregnancy.” And according to Rewire, the doses “would still be effective in causing an abortion.” These statements are neither unbiased nor based on established fact.

Of paramount importance was that none of the providers of these online chemical abortion drugs provided patient directions on how to administer them. Patient safety informationprovided to women in the US includes 19 pages of directions and cautions for mifepristone (marketed as Mifeprex).

Additional problems with the research revealed:

After the orders were placed, some of the websites soon disappeared from the web.

Gynuity investigated only twenty percent of available online websites identified by the Charlotte Lozier Institute this summer—hardly representative of the potential dangers to women and their babies.

Nearly half (45 percent) of the shipped packages arrived damaged or did not arrive at all, thus further compromising the online process.

Nothing in the ordering process afforded protections for women from nefarious third-party purchases such as disgruntled boyfriends or sex traffickers.

Time is of the essence when using chemical abortion drugs, yet many of the orders arrived up to three weeks after placing and paying for the orders.

Instead of declaring online orders of chemical abortion drugs safe, if these abortion advocates truly cared about women’s health, they’d be warning women to avoid them. In the context of securing a safe abortion, these questionable drugs are more akin to a chemical coat hanger than they are to a safe, private abortion experience.

This is an extreme case of buyer beware.

This article was originally published by the Life Issues Institute and it re-published with permission.

Abortion is not the end: Priests for Life event highlights RU-486 reversal procedure

WATCH: As FDA expands RU-486 abortions, former abortionist shows what they look like

She took the RU-486 abortion pill. But, weeks later, she thought she felt movement…