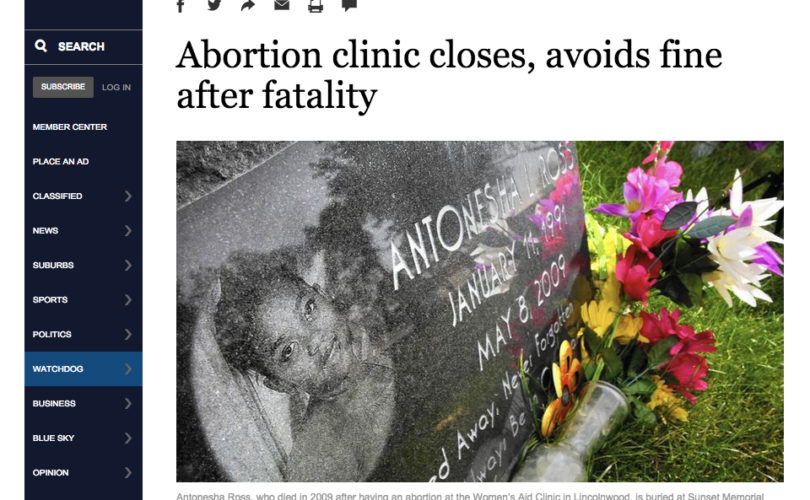 Febuary 18, 2015 (ProlifeAction.org)– The Pro-Life Action League has been following the story of the Women’s Aid Clinic abortion facility closely for the past three years, and we’re pleased that it’s finally receiving thorough treatment from a major media outlet.

Yesterday’s Chicago Tribune has a major front-page article on the Women’s Aid facility, whose owner, Larisa Rozansky, still has not paid the $36,000 fine assessed by the State of Illinois in 2011.

The massive fine was assessed in response to a host of serious violations discovered by state inspectors, including failure to perform CPR on 18-year old Antonesha Ross, who died following an abortion performed there in 2009.

Since that time, Rozansky closed out the Women’s Aid Clinic bank account, dissolved the company, changed its name to Women’s Aid Center and moved to a different location — although the “Center” continued to use the same website and phone number, and for a period of time, even processed credit cards via the same Merchant Services account number as the “Clinic.”

When the state reminded Rozansky that in March 2012 that paying the $36,000 fine wasn’t optional, her response was that Women’s Aid Clinic “does not exist,” and so the state was out of luck.

In a January 2014 court hearing—which I attended—Rozansky’s attorney, Scott Skaletsky, argued that Women’s Aid Clinic and Women’s Aid Center were two “totally different businesses,” and that when Women’s Aid Clinic closed in March 2012, it had a mere $77 in its bank account. Skaletsky then told Cook County Judge Alexander White that Rozansky would be willing to write a check to the state for $77 to “make this go away.”

Unbelievably, Judge White actually bought that argument. In response, the Pro-Life Action League asked Illinois residents to take action by calling the office of State Attorney General Lisa Madigan and urging her to appeal the judge’s ruling. Her office did ultimately appeal the ruling, and the case is currently in the Illinois Appellate Court, where both parties are filing brief for oral arguments (the date for which has yet to be determined).

“For them not to pay the fine…it’s not right.”

Yesterday’s Chicago Tribune article by reporter Nara Schoenberg—totaling over 2,200 words—is one of the most comprehensive articles I’ve read about an abortion clinic in a major news outlet in some time. Particularly noteworthy is the detailed account Schoenberg gives regarding the negligent treatment Antonesha Ross received on the day she died.

The abortion took about five minutes, after which Ross had difficulty breathing and began coughing up fluid and blood, although clinic employees didn’t call an ambulance until 40 minutes later. Then, Schoenberg notes, they merely “[offered] her a bag to breathe into” but didn’t bother performing CPR.

Schoenberg also includes some very emotional remarks from one of Ross’s close relatives:

“At the end of the day, there is a young lady that is gone, and she cannot see her children grow up, and her family misses her,” said Ross’ cousin Janell Austin Tuft of College Park, Ga. “And for us to not get justice — for them not to pay the fine — it’s not right. It’s just not right.”

Schoenberg also goes into detail on what Illinois Department of Public Health (IDPH) officials found when they paid a visit to Women’s Aid in 2011:

In an operating room that hadn’t been used for two days, five insulin syringes were found outside of their protective packaging. The anesthesia cart contained about 28 vials of expired medication, including about 20 vials that had expired more than a year earlier.

The inspector found medications and frozen dinners stored in a biohazard refrigerator that also contained fetal or placental tissue, according to the report, and a recovery room technician was observed taking a paper towel from the garbage and using it to cover a tray used to serve food to patients. …

After the inspection, the state suspended the clinic’s license on an emergency basis, citing conditions that were “directly threatening to the public interest, health, safety and welfare,” and fined the clinic $36,000. [emphasis added]

It’s also worth noting that this was the first time Women’s Aid had been inspected in 15 years.

Abortion clinic owner claims she is the victim

Rozansky herself is quoted in the article on a couple of occasions, and makes no bones about claiming that she is the one who’s the victim. Here’s one example:

“I tried to help women to get legal abortions,” Rozansky said. “If someone wants to work against that, there’s nothing I can do.”

Here’s another (referring to the January 2014 Cook County court hearing):

At one point, Rozansky blamed the fine on the age of her medical equipment — a relatively small factor, inspection records show, compared with the lack of proper nursing personnel and the lapse in Ross’ care.

“That’s why I was fined: because the equipment was old,” Rozansky told the judge. “So I gave it away.”

“So I gave it away.”  Think about that for a second.

It doesn’t take much common sense to know what should be done with old—and, more to the point, unsafe—medical equipment: It should be disposed of.  But instead, abortion clinic owner Larisa Rozansky gave it away, presumably to be used again.

Expired medications, frozen dinners in biohazard freezers, giving a dying woman a paper bag instead of performing CPR, failing to dispose of unsafe medical equipment…and Larisa Rozansky claims that she and her abortion clinic are the ones being victimized.

Such complete and total disregard for basic health and safety and utter contempt for the law illustrate how incredible it is that Illinois does not require regular inspections of abortion facilities, to say nothing of the fact that several other abortion facilities in the state—including all of those run by Planned Parenthood—are not subject to inspection at all.

“Safe and legal”? You be the judge.