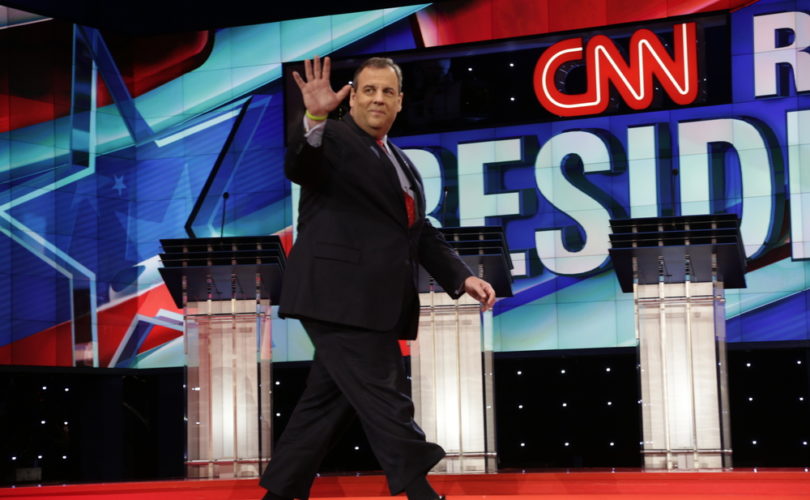 February 9, 2016 (Savethe1) — Children conceived in rape – like me – took a beating at the GOP presidential debate in New Hampshire Saturday evening.  Gov. Chris Christie and Gov. Jeb Bush had some harsh words regarding the treatment of the innocent child conceived in rape, and I think their rhetoric demonstrates that they're not really committed to ending abortion, but merely doing the bare minimum to win votes from those who identify as pro-life.

For starters, Gov. Christie said, “I believe that if a woman has been raped, that is a pregnancy that she should be able to terminate.”  What does he mean by “terminate”?  It may come as a surprise to many of you, but I voluntarily terminated three of my pregnancies.  My daughters are doing quite well now, after having labor induced.  You see, you can terminate a pregnancy and still have a live baby.  Normally delivery of a baby is the termination of a pregnancy.  Inducing labor or performing a C-section is the premature termination of a pregnancy.  But that’s not what Christie is talking about, is it?  He’s talking about the termination where you have a dead baby – because he or she is killed.  So what he’s saying is that my birthmother – a woman who had been raped – should have been able to kill me.  Ouch!  That’s not pro-life.

Then he went on to say, “The fact is that we have always believed, as has Ronald Reagan, that we have self defense for women who have been raped and impregnated because of it or been victims of incest and been impregnated for it.”  Since he used the tactic of invoking President Reagan, let’s take a look at what Reagan actually said:

Let us unite as a nation and protect the unborn with legislation that would stop all Federal funding for abortion and with a human life amendment making, of course, an exception where the unborn child threatens the life of the mother. Our Judeo-Christian tradition recognizes the right of taking a life in self-defense. But with that one exception, let us look to those others in our land who cry out for children to adopt.  I pledge to you tonight I will work to remove barriers to adoption and extend full sharing in family life to millions of Americans so that children who need homes can be welcomed to families who want them and love them.  – Ronald Reagan, State of the Union address, January, 1988

If you’re going to invoke Reagan to bolster your position, you’d better be sure you got that right.  But in case mischaracterizing Reagan’s position wasn’t bad enough, Gov. Christie outdid himself with his next statement:  “I believe that they do not have to deliver that child if they believe that is an act of self defense by terminating that pregnancy.”  “An act of self-defense?!”  This is the kind of rhetoric you hear from abortion rights advocates – suggesting that the innocent preborn child is somehow continuing to rape the woman, and therefore, she needs to kill the baby to stop the rape.  Gov. Christie, since you recognize my right as a woman to engage in an act of self defense, let me clear up your confusion: I was NOT raping my birthmother!  I was not attacking her.  I was innocent.  I’m pleading my innocence!  So here’s my advice to you – punish rapists, not babies.  It’s not a difficult concept.  This is my act of self defense – quit picking on innocent children like me by suggesting our lives weren’t worth living or protecting, because I fight back and I will defend my life!

Since his remarks Saturday evening, I’ve been inundated with suggestions from people that I need to talk to him and to share my story with him – just like with Gov. Rick Perry and Newt Gingrich four years ago when I changed their hearts during their presidential campaigns.  Well, I DID share my story with Chris Christie, at the Republican National Convention in Tampa, Florida in August, 2012.  But he’s a different character and hard-hearted.  Like in the Parable of the Sower, in Matthew Chapter 13, the seeds did not fall on fertile soil.  But then Jesus explained:

This is why I speak to them in parables:

In them is fulfilled the prophecy of Isaiah:

As if the shots from Chris Christie weren’t enough to dehumanize and demoralize my people group, Gov. Jeb Bush had insults of his own:  “I am pro-life but I believe there should be exceptions — rape, incest and when the life of the mother is in danger.”  Any time a politician starts off with “I am pro-life but,” you know he’s not committed to ending abortion.  He may do the bare minimum to get pro-life voters to think he’s pro-life, but he’s not someone who is reliable to end legalized abortion, he’s not dependable to appoint Supreme Court Justices who will overturn Roe v Wade, and he’s clearly willing to discriminate and to leave the door open for all abortions through gaping loopholes.

Then Gov. Bush issued the most telling remark – “That belief and my consistency on this makes me, I think, poised to be in the right place — the sweet spot — for Republican nominee.”  OUCH!!!  Okay, please keep in mind that I’m biting my tongue as I respond to his “sweet spot” remarks.  I looked up the definition of “sweet spot,” just so everyone understands how callous his words were, and the first definition to come up is sexual in nature — “a spot on the body that responds pleasurably to a caress or touch,” and then there’s the sports reference – “the area from which the cleanest shots are made.”  Whether Jeb Bush is climaxing at the thought of denying a child conceived in rape her right to life in order to gain him victory as the GOP nominee, or if it’s that he finds the rape victim’s child to be the perfect whipping boy for taking shots at, his remarks are offensive, dehumanizing and demoralizing.

Lastly, Bush said, “Others may have a different view and I respect it.”  This isn’t about respecting mere political views — this is about respecting not just my “view,” but my life!  I deserve to be alive, I was worthy of the protection I received pre-Roe v Wade, and others just like me deserve the same opportunity to be born.

Recently, Sen. Lindsey Graham has made hurtful remarks calling children like me “the child of the rapist.”  I am sure he has no idea how offensive that is to the majority of rape survivors who not only choose life, but choose to raise their children.  After everything she’s been through and had to overcome, he has the audacity to suggest that her child is the rapist’s child.  We don’t call President Obama “the polygamist’s child,” so stop trying to demonize us in such a manner.  Give us our dignity and call us who we are – a rape victim’s child, a child of God, a person with a right to life.

Right now, the only two GOP presidential candidates who support overturning Roe v Wade and who refuse to discriminate against the child conceived in rape are Senator Ted Cruz and Senator Marco Rubio.  I’ve met Sen. Rubio in person, and would love to meet Sen. Cruz some day.  But I’m also willing to meet with any other candidates, and I do hope that by putting a face, a voice, and a real-life story to the issue, their hearts and minds would be changed so that they’d no longer support the killing of innocent children.   There are over 300 hundred of us through Save The 1 who were conceived in rape, mothers from rape, birthmothers from rape and post-abortive after rape.  We are thankful for the gift of life, we deserve our dignity, and we want our voices to be heard.

Rebecca Kiessling is a wife, mother of 5, attorney and international pro-life speaker and blogger.  She shares her story of having been conceived in rape and nearly aborted at two back alley abortions, but legally protected.  She’s the founder and President of Save The 1, co-founder of Hope After Rape Conception, and co-founder of Embryo Defense. Reprinted with permission from Save The 1.