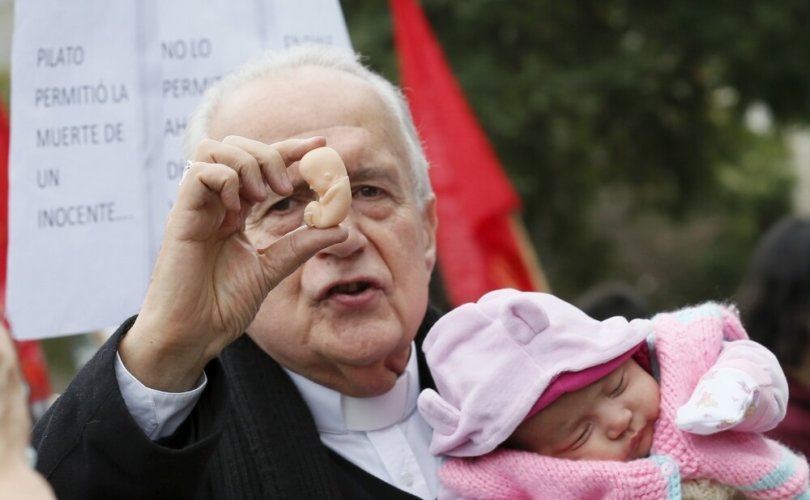 August 24, 2017 (LifeSiteNews) — Barring a last-minute miracle, a great tragedy is about to occur.

The world is about to lose a bright, shining star.

The country of Chile has been a light to the world and a model for other countries to follow.

Chile's laws and legal system have for decades protected the lives of both mother and unborn child equally. There has been no legal abortion for years in Chile.

Chile has been a world leader in reducing maternal mortality rates, and is the safest country in all of Latin America for a mother to give birth.

But outside pressures combined with too many misguided political leaders are threatening to extinguish Chile's light. After more than two years of social and legislative debate, the Chilean Senate and Chamber of Deputies have approved President Michelle Bachelet's abortion legalization proposal.

A last-ditch appeal to the nation's Constitutional Tribunal by pro-life legislators failed to turn back the main portions of this legislation. The Tribunal ruled Monday by a split vote of 6-4 to allow major elements of the abortion law to take effect.

The full decision of the Tribunal will be made public next Monday, August 28.

Now, instead of having a recognized, inherent right to life, an unborn child who is perceived as a “vital risk” to his or her mother may soon be legally killed by the government's healthcare system, paid for by taxes.

And an unborn child who is diagnosed in utero as being non-viable outside the womb, or an unborn child claimed to be a result of rape will soon lose their legal protection and be subject to death through government-facilitated abortions.

Chile has succumbed to the lie that in order to be a “modern” country it needs to follow the example of other countries. When in fact Chile is an example that the reverse is true.

No one can predict the extent of this tragedy, but few knowledgeable people think these abortion “exceptions,” as bad as they are, will not inevitably be further expanded in practice, and then in law. For Chile, now seriously compromised, to prevent further decline will be very difficult, given the history of so many countries once they open the door to supposedly just a “little bit” of abortion.

What will this mean for the country and its people now that the very basis of law, to protect the innocent, has been rejected? Chile has been recognized throughout Latin America for having renowned professors of medicine, jurists and other professionals who have demonstrated strong pro-life values through their professions. It will be tragic to see the corrupting consequences of legalizing abortion on these professions that are meant to be dedicated to healing and to justice.

And the effects of Chile's abandonment of pro-life principles in law will be devastating for their young people and the future of the country.

It is tragic that this is happening to Chile, a country which for so long has exemplified so many crucial pro-life values.

Barring a miracle, the abortion legislation will be signed by President Bachelet and become law after its official publication.

Our prayers are with those Chilean people who are now faced with the urgent task of restoring legal protection for both mother and child, so that Chile's light can shine brightly again.