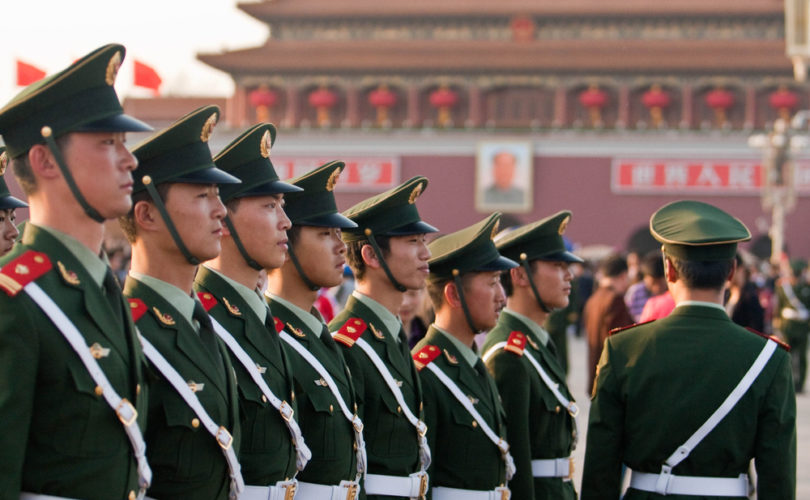 November 30, 2015 (LifeSiteNews) — Chinese government officials in Xinjiang last month killed 17 people, including women and children – in retaliation, they said, for a knife attack in a coal mine two months earlier. As usual, the Chinese Communist Party (CCP) kept mum on the details.

The conflict is merely the latest in a trend of increasing civil unrest in China.

Internal data showed “mass incidents,” ranging from sit-ins to riots, doubled from 2006 to 2010, when there were 180,000 such incidents. According to the Chinese Academy of Social Science in 2012, mass incidents now regularly exceed 100,000 per year.

If China’s Family Planning Officials were an official army, they would tie with North Korea as the sixth largest in the world.

This “army” can be turned in any direction to crush dissent of any sort. Does the Chinese Communist Party regard this as necessary to maintain control in a tinder-box situation?

Officials employ a “vast system” of control and intimidation to enforce their policies, as blind Chinese activist lawyer Chen Guangcheng, himself a former torture victim at their hands, told U.S. officials this spring.

When China announced its new Two-Child Policy, Chen was not impressed. He tweeted:

Government officials, he told the U.S. Congress, routinely form large groups that “[act] like bandits” to enforce its policies at any cost, usually with no accountability to the law.

Chen cited signs posted by officials in various provinces to terrorize citizens into compliance with child limitation policies. For example, in Yunnan: “All villagers will be sterilized once a single villager violates the birth quota.

In Sichuan: “Anyone avoiding sterilization must be punished by bulldozing their house; anyone avoiding abortion shall surrender their cattle and house.”

In Jiangsu: “We’d rather see a river of blood than a single baby born alive.”

Clearly, it's in China's interest to keep such an experienced, and brutal, force on hand as the country continues to destabilize. The million-strong army of Family Planning Officials fits the bill perfectly.

Other examples of Family Planning Official thuggery include:

The spirit of the Cultural Revolution lives on in the Family Planning Police, who brutalize people with impunity with a fervor reminiscent of the Red Guard. These ubiquitous, barbarous brigades appear indispensible in maintaining order at a time of growing social unrest – another, compelling reason that the Chinese Communist Party will never abandon coercive population control.