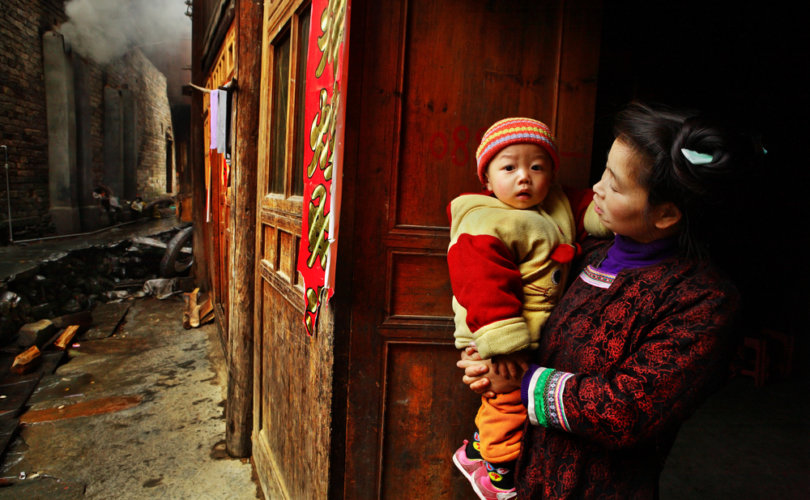 November 1, 2016 (Womens Rights Without Frontiers) — In a triumph of investigative journalism, the BBC has released a Report, “China’s forbidden babies still an issue,” confirming that under the Two-Child Policy, forced abortion remains a threat for women pregnant with a third child.

In this Report, John Sudworth, the BBC’s Beijing Correspondent, interviews the father of a family in hiding because his wife has just given birth to their third child.  The Report describes the man as “anxious and on edge, but still determined to tell his story.”  The father told the BBC, “A third baby is not allowed, so we are renting a home away from our village.  The local government carries out pregnancy examinations every three months.  If we weren’t in hiding, they would have forced us to have an abortion.” (Emphasis added.)

The family was able to escape forced abortion by going into hiding, but when they come out, they will face a fine that could be as large as ten times their annual salary.  “We don’t have the money for the fine.  We just don’t know what to do,” the father told the BBC.  He does not, however, regret his decision.  “When I look at our new baby, I feel happy.”

The adjustment from one child to two children per couple took place one year ago last week.  To mark this anniversary, Sudworth aimed to discover what this policy shift means in practice.  “And what we have discovered,” he concludes, “suggests that the brutal machinery of enforcement is still in place along with the Chinese state’s insistence on the right of control over women’s wombs.”

Reggie Littlejohn, President of Women’s Rights Without Frontiers, stated:  “This powerful report confirms what I have been saying all along:  the new two-child policy will not end forced abortion.  As blind activist Chen Guangcheng succinctly tweeted:

“Under the Two-Child Policy, a woman’s body remains in the domain of the State,” Littlejohn continued.  “The entire infrastructure of coercion remains in force, with forced pregnancy examinations every three to six months.

“My heart goes out to this family, compelled to go into hiding, becoming fugitives, all to avoid the forced abortion of their third child.   They are caught between the joy of holding their new baby in their arms and the fear of what will happen to them when they come out of hiding, since they cannot pay the fine.  Who knows whether they will lose their jobs as well, becoming destitute – all this to give birth to their children, which is a human right.

Sudworth also visited the local family planning center, where he asked a senior official whether forced abortions had been carried out in the operating rooms there.  The official replied, “Very few,” and then added, none for “at least 10 years.”

Sudworth reflected, “Where else in the world would you find a government official admitting that his colleagues have kidnapped, drugged and forcibly operated on women, no matter how long ago?  Where else would the qualifier ‘very few’ be considered an acceptable alternative to an outright denial?”

Sudworth’s colleague then called several family planning centers and spoke to officials at random.  She pretended to be pregnant with her third child and asked how she might keep it.  All the officials stated that she would have to pay a fine.  Such fines can reach ten times a person’s annual income.  Inability to pay such fines has led many women to abort a child they would otherwise want.

Beyond this, some of the officials went further, “engaging in coercive home visits with the aim of ‘persuading’ women to have abortions,” according to the BBC Report. One official told Sudworth’s colleague, “If you’re reported to us, then we’ll find you and we’ll persuade you not to give birth to that baby.”  Another official said, “We’ll definitely find you and persuade you to do an abortion.”  When asked if a woman could have a third child and then pay the fine, a third official stated, “No.  You just can’t.”

Littlejohn said further, “The statement by the officials, ‘. . . we’ll definitely find you and persuade you to do an abortion’ indicates that the Chinese government continues to conduct search and destroy missions, searching for ‘illegally pregnant’ women to destroy their desperately wanted babies.  This happened to Feng Jianmei and Wujian, both of whom were dragged out of hiding and forcibly aborted.  And what does the word ‘persuade’ mean here?  Does it mean forcing a woman to ink her fingerprint on a consent document, like they did to Feng Jianmei?

“I applaud the brilliant investigative journalism of John Sudworth and his colleague, and the courage of the BBC to publish his Report,” concluded Littlejohn.  “It is extremely difficult to find people willing to speak to the western media about the continuation of forced abortion in China, because of harsh retaliation of the Chinese government against them personally and their families.  The story of this courageous couple in hiding deserves to be told the world over.  This is investigative reporting at its best.”