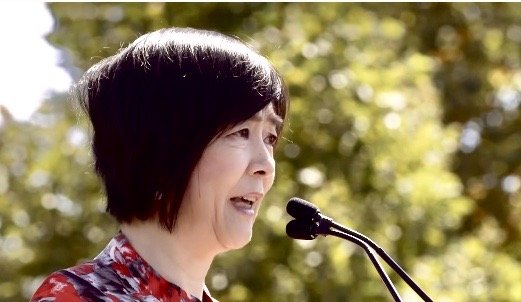 September 15, 2020 (LifeSiteNews) – September 15 is the International Day of Democracy – a day when those of us fortunate enough to live in a democratic society celebrate breathing the air of free speech, freedom of religion, self government, and the rule of law.

Too often, socialism is held up as an ideal, even in the United States. My colleague, Jennifer Zeng, is a courageous survivor of a Chinese labor camp.  She describes the truth about socialism. The Chinese Communist Party forcibly aborted Jennifer’s second child under the One Child Policy. Then, they burst into her home in the middle of the night and detained her. When she asked why, the police officer answered, “Because of your thought.”

Jennifer, a survivor of “socialism with Chinese characteristics” – communism – tells the story of being detained and tortured brutally in a labor camp because of her religious beliefs. On her first day, she and others were forced to squat with their hands behind their heads, looking at their feet, for 15 hours, in the baking sun. Anyone who fainted was shocked awake with electric batons.

Jennifer says that “Every day was a struggle between life and death.” She says that the slave labor in the camp was used to make products sold all over the world, including in the United States. She says that she and others were forced to submit to blood tests, the results of which would go into a database for forced organ donation, in which innocent people were killed to harvest their organs for transplant.

Anyone who thinks socialism is a good idea should watch this video. It is just four minutes long. Socialism makes promises that sound noble, but in reality, it delivers crushing pain. Man-made famines, thought police, inescapable surveillance, forced abortion and sterilization, forced organ harvesting, and so many more crimes against humanity have brutalized the Chinese people for more than 70 years. Those of us who live in democracy must commit ourselves to never let this evil form of government take hold of our land.

I have met Jennifer. She combines true humility and sincerity with intellectual brilliance and inexhaustible courage. Thanks to Breitbart for producing this powerful video, and providing subtitles.