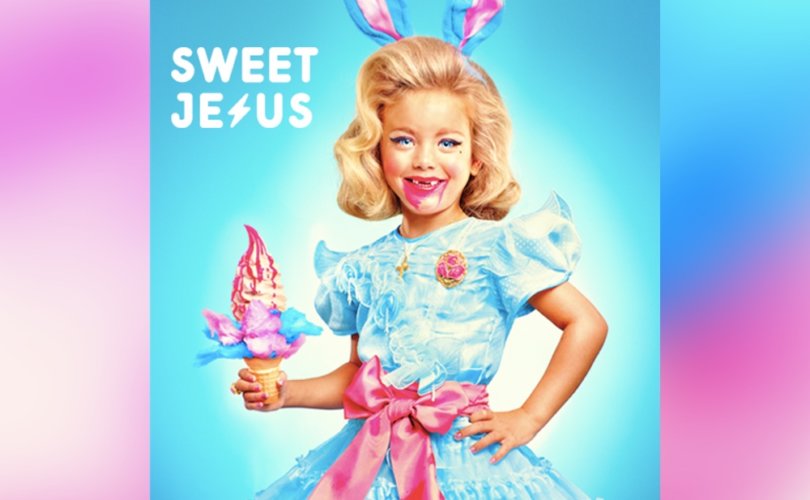 TORONTO, March 23, 2018 (LifeSiteNews) – A Canadian ice-cream chain is about to begin peddling its wares in the United States: soft-serve ice cream topped with loads of blasphemy.

The company is called “Sweet Jesus.” It was founded in Toronto by Andrew Richmond and Amin Todai in 2015. The company is part of parent company Monarch & Misfits where Richmond is CEO. There are already 19 locations in Canada, and one at the Baltimore–Washington International Airport. It has plans to open in other U.S. locations, such as Mall of America.

Its name and flashy advertisements mock the Christian faith.

One ad on the company’s website shows a Nativity Scene, but instead of Baby Jesus, there ’s an ice-cream cone. Many of their ads are replete with cherished Christian and Catholic symbols that are used to mock faith, including a rosary, a crucifix with a corpus, and angels.

There are also Satanic symbols interspersed throughout their ads, such as upside-down crosses, lightning bolts, skulls, roaring wildcats, and images that suggest vampires and blood.

“The entire marketing concept of their company is to mock the name of the Lord Jesus Christ,” wrote Elizabeth Johnston about the company on her blog Activist Mommy in January.

Many have found the ads featuring children disturbing and creepy. Some of the children have bruises and appear to be abused. Some say the ads sexualize children and have accused the company of pandering to pedophiles.

Some Christians have rightly decided to boycott the company. They have started a petition that aims at convincing Richmond and Todai to change the name of their company. It has been signed by over 7600 people.

Faithful Christians follow the Second Commandment about not taking the name of God in vain. This means that God’s name should be used respectfully, as in prayer or in blessing. Anything else is misusing his name. Christians believe that Jesus is God and his name is holy. St. Paul in his letter to the Philippians put it this way: “At the name of Jesus, every knee shall bow.”

“Choosing the name of our Lord for a brand of soft-serve ice cream is totally offensive and revolting,” states the petition at Citizen Go.

“Even if this were some innocent faux-pas, it would still be unacceptable! However, this is anything but a mere mistake. Both in their promotional materials and menu selection, it is plain to see that Richmond and Todai have every intention of mocking Christ and Christianity. If anything could qualify as ‘hate speech,’ this is it!”

The company has included on its website an unconvincing little disclaimer about its name that reads:

Our name was created from the popular phrase that people use as an expression of enjoyment, surprise or disbelief. Our aim is not to offer commentary on anyone’s religion or belief systems, Our own organization is made up of amazing people that represent a wide range of cultural and religious beliefs.

The disclaimer will not convince Christians because of all the anti-Christian symbols used in the advertising.

While sometimes Christians deserve scorn for their moral failures, Our Lord Jesus Christ does not. Jesus Christ deserves honor, love, and respect.

This brings me to a question: have we slid so far into cultural decline that it now becomes okay to frequent a shop that blasphemes the name of Jesus?

I think no one should step into a business that openly mocks the name of Christ and uses anti-Christian and even Satanic symbols in its advertisement.

Sugary things should be an occasional treat. In large amounts, they’re bad for you. Blasphemy, of course, is always bad for you, leading both you and those around you to increasingly disrespect the Name and then the Person of Jesus Christ. Those who remain unrepentant of blasphemy risk losing heaven forever.

So here’s my advice: Avoid “Sweet Jesus” altogether and tell your friends why you’re upset when they frequent it.

I wonder what might have happened had the company been named “Sweet Muhammad” and employed the same kind of plays on Islamic religious symbols as it does on Christian ones. Mohammed Mud Pie anyone?

It would never have been tolerated.