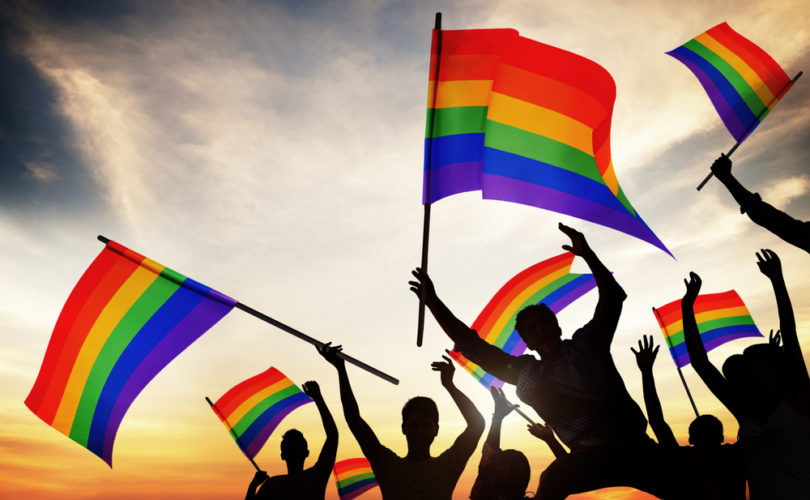 April 14, 2015 (Crisis Magazine) – The controversy about the Indiana religious liberty statute is a textbook example of the increasing timidity of leading Republican politicians in the face of the homosexualist movement. It is an exposé of how they just can’t get past the politics of the moment—which they often poorly analyze—to see the civilizational questions that confront us in these times.

Governor Mike Pence of Indiana quickly stepped back after supporting and signing the law as soon as the crescendo of criticism from the homosexualists and their media allies began and concerns about hurting the Indianapolis tourist trade were raised. After consulting with homosexualist organizations, he pushed through the state legislature a “clarification” of the law that supposedly would insure that it wouldn’t be used to “discriminate” against homosexuals. By doing that, the law was essentially gutted and the homosexualist organizations scored a major victory by securing specific protection for sexual “orientation” and “identity” for the first time in Indiana law. In effect, a law that was supposed to be passed to protect persons from legal attacks for refusing to do things like provide services for same-sex “weddings” and the like because of religious and moral objections now potentially opens the door wide for such attacks.

A quick examination of the 3-page original statute—one wishes that Congress would limit itself to bills of such length—shows that it essentially did nothing more than to affirm that a person’s religious liberty could not be infringed upon by the state, except when there is a compelling public interest. This essentially has been the standard of American law, even though it was done by statute for most of our history. Change came when the Supreme Court elevated it to the level of a constitutionally mandated test for the validity of governmental action vis-á-vis religion in the 1960s. It is also the position of the federal Religious Freedom Restoration Act (RFRA) that applies to federal action. Congress passed RFRA in response to the Court’s abandoning of the constitutional test in 1990 (effectively making it a matter for statutory law again). Congress intended that RFRA would apply to state as well as federal action, but the Supreme Court disallowed that on federalism grounds. If the states wanted to employ a compelling public interest standard, they would have to enact it into law. So, we see the current push, especially in the wake of the publicized cases where religious liberty and homosexualism are colliding around the country, for state religious liberty statutes.

There are no absolute rights. Even though religious liberty was a fundamental right in the understanding of our Founding and enshrined into the First Amendment, one may not do anything and everything in the name of it. For example, the right to religious liberty does not mean that one may engage in human sacrifice as part of some religion. There is clearly a compelling reason for the state to stop murder, mayhem, or genuine social disruption in the name of religion. Even in the relativistic world of the homosexualist movement and the rest of the left, however, it’s hard to make the claim that the “need” to facilitate sodomy is on the same plain as these things. Since what they are demanding, at bottom, is universal approbation—even acclaim—for gross sexual immorality and perversion and a compelling public interest standard is an obstacle that must be eliminated, as with the Indiana statute.

Chai Feldblum, a Georgetown law professor and Obama appointee to the Equal Employment Opportunity Commission, claims that in almost all cases sexual liberties trump religious liberty. Her view increasingly seems to be the position of the left. As far as she is concerned, the First Amendment was washed away by the sexual revolution. It almost goes without saying that there is no basis for such a position in the American constitutional tradition. Of course, that does not trouble homosexualist advocates like Feldblum who believe, like leftist constitutional scholars and judges generally, that the Constitution is a “living document.” So, it can be changed, just like morality, in accordance with and to accommodate one’s desires. In truth, it’s preposterous to claim that facilitating sodomy is a compelling public interest that overpowers the right to religious liberty. At bottom, requiring Christians and other unwilling religious believers to take part in same-sex “marriages” means that they are being forced to give social approval to the state’s action of officially recognizing immoral sexual activity.

When legal protection against discrimination and the like is accorded to homosexuals what’s being done, for all practical purposes, is protecting a behavior. There is no proof that homosexuality is an innate, inborn state or “orientation.” In fact, the evidence is increasingly suggesting that same-sex attraction for many is a transitory phenomenon at a certain point in their lives—in some cases prompted by sexual experimentation. The homosexualist movement seeks to suppress such evidence with a vengeance, because it undercuts its ideology and agenda. The protection of behavior is a convolution of the notion of civil rights and anti-discrimination laws, which aim to stop unjust treatment of groups of people either on the grounds of unchangeable characteristics such as race or ethnicity, or because of religious belief pursuant to the historic principle of religious liberty—the very thing that the homosexualist juggernaut is jeopardizing.

Fundamentally, what stands behind the notion of civil rights laws is the securing of human dignity for groups of people who have been denied it. It is hard to make that case to protect a behavior that—in light of the abundant physical, psychological, moral, and spiritual consequences—so undercuts human dignity. To legally mandate that Christians and other believers serve such people in a way that furthers and legitimizes such behavior is the same as telling them that they must help someone to engage in lying or cheating behavior. If there is a civil right to have people accept and even assist in one kind of immoral behavior, why not any other? Isn’t it just because this particular behavior has gained the support of the opinion-makers and culture-shapers, whose viewpoint reflects a predominant ideology that flies in the face of reality?

One European Catholic scholar spoke about the deepening totalitarian mindset of the LGBT—homosexualist—movement. One prominent American entertainer, not unsympathetic to their cause, made an objective assessment and termed the movement with its relentless pressure tactics a “gay mafia.” Homosexualist activists and organizations are deft at portraying the people they claim to represent as victims while they are really the victimizers, and many politicians and bureaucrats are their enablers (some for reasons of ideology and others, like in Indiana, because they lack courage and place a narrow notion of public prosperity above truth). Their victims are people like the elderly florist in Washington State who nasty state officials want to render penniless, the baker in Colorado who was ordered to undergo “sensitivity training” (a less severe version of what used to happen to dissidents in the Soviet insane asylums), the Mozilla co-founder ousted for contributing money to the Proposition 8 campaign, and the pizzeria owner in Indiana who had to temporarily close his business in the face of savage online attacks and threats.

What should Christians and other believers do in the face of this heightening repression? They must go on the offensive—charitably but vigorously—and fight the battle on several levels. When leaders fade into the woodwork—even when the stakes are basic constitutional liberties and civilized norms—the people have no choice but to step up. First, they must persistently speak up about the realities of homosexual behavior, the coming consequences for our culture, and especially the totalitarian mindset and repressiveness of the homosexualist movement. Next, they must constantly let cowering public officials know how they oppose their buckling to pressure and will remember it at the next election. Third, continued and intensified legal resistance is necessary. The organizations providing legal defense are crucial, but others must be formed to take an offensive posture. The lame discrimination complaints by homosexualist organizations against believers in human rights commissions and the pressuring of corporations to dump executives and employees who dissent at all from the homosexualist agenda should should be met consistently with lawsuits for abuse of process and defamation. That would put financial pressure on the well-heeled homosexualist organizations.

Fourth, they should organize well-targeted boycotts of companies that buckle under to the homosexualists and well-publicized showings of support for those who won’t. The Chick-Fil-A episode of a few years ago showed what’s possible in this regard. Weak-kneed, utilitarian-minded corporate leaders might then get the message that religiously oriented citizens are more of a force to be reckoned with than a small cadre of well-placed homosexual activists. Fifth, it’s time for frequent, perfectly legal public rallies against the totalitarian schemes of the homosexualist movement and the state bureaucrats who run interference for them. There’s a need to take to the streets to clamor against tyranny and for religious liberty. The religious liberty rallies of June 2012 occasioned by the HHS mandate need to be a regular occurrence in state capitals and big cities around the country. The rallies against same-sex “marriage” in France are a model of what can be done. Finally, they must couple all these efforts with much prayer.

The rank-and-file now must show courage and boldness that contrasts with current leaders, always keeping Burke’s famous dictum in mind: “The only thing necessary for evil to triumph is for good men to do nothing.”

Republished with permission from Crisis Magazine

Analysis: What went wrong in the ‘Religious Freedom’ fight in Indiana and Arkansas?

Across America, churches continue to struggle for their religious freedom