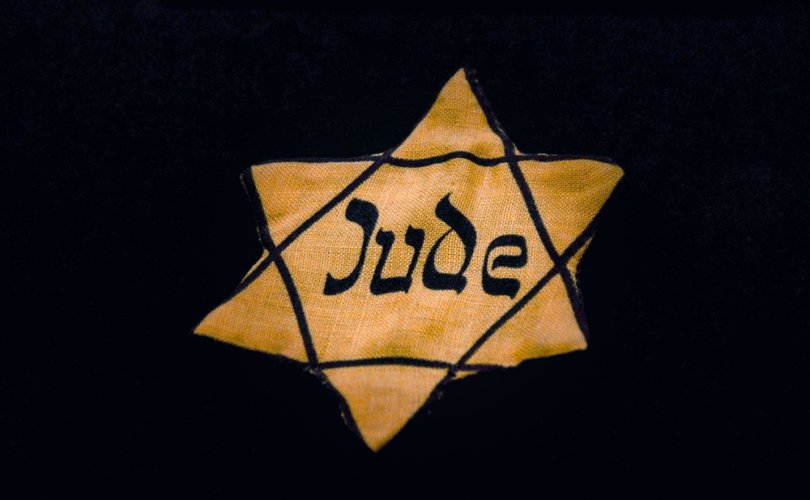 December 16, 2020 (LifeSiteNews) — The first half of the twentieth century was disfigured by an antisemitism of a nature and intensity unknown before modern times.

This horror, ending in the greatest single crime ever committed by a European state upon any group under its power – the industrial murder of six million innocent men, women and children in purpose-built factories of death – has a unique, even preternatural, intensity.

From a Christian perspective it is impossible to ignore the obvious diabolical origin of this attack on the kin of the Messiah and, once this fact is recognized, perceiving the long anticipation of twentieth century secular antisemitism in the inter-confessional disputes that disfigured the ages of faith chills the blood and weighs down the head of every follower of Christ.

Surely, after the full exposure of the abomination, this foul thing could never again rise in the west? Apparently, it can. The crimes of Communism and of the liberal culture of death have already shown that fallen humanity’s appetite for slaughter was not exhausted. Now the specific phenomenon of antisemitism is rising from its grave and demonstrating once more its unique ability to combine ideologues of left and right in a great fellowship of hate.

What is antisemitism? What is the nature of its malice? Has the Church been guilty of it in the past?

In Britain, Jeremy Corbyn, the leader of the Labour Party until his resounding defeat at the last General Election, was repeatedly accused of antisemitism. According to opinion polls the vast majority of British Jews believed the allegations, and even the political editor of the New Statesman (the main left-wing highbrow British weekly) omitted to vote for Corbyn’s party because of them. Corbyn forcefully denied the charges.

I doubt he was consciously lying. Probably he thought that because he didn’t ascribe negative characteristics to the Jewish people on a biological basis, he logically could not be anti-Semitic. He was, however, clearly and profoundly hostile to the State of Israel. He supposedly backed a “two state solution” to the difficulties in the Holy Land, but he also backed “the right of return,” which effectively entails the abolition of the State of Israel as it would result in an Arab Muslim majority within its territory. As I pointed out to someone at the time, that is like saying “I am not anti-French, I just think the territory of the French Republic should be partitioned between Germany, Italy, Belgium, and Spain, and its population ‘encouraged’ to move elsewhere.” Most French people would think that made you anti-French.

Obviously, racism, the attribution of negative characteristics, or of a general inferiority or superiority, to some part of the human race based on their descent is false, immoral, and contrary to the defined teaching of the Church. Corbyn would say he is not guilty of racism. Culture and citizenship, however, are also inherited even if they are not grounded in biology, and it is certainly the case that Corbyn was hostile to the Jewish state and to some extent to Jewish culture (he made a hideous comment about Jews lacking a sense of irony).

Does that mean that to say, “Canadians are nice,” “Scots are stingy,” “Italians are vain,” or “the English are smug” is racist? I feel uncomfortable saying that. If acknowledged as slightly absurd cultural generalizations, these statements do not seem racist. The Americans call (or called) the World War II generation the “greatest generation” because they implicitly recognized certain virtues in the culture of that time and certain pathologies in their own.

But cultures do have virtues and pathologies. Aztec culture was, let us say, a bit problematic. The Spanish culture that destroyed it was hardly unspotted. Indeed, the occasion of sin offered by colonialism has proved itself too much for any culture to bear. Obviously, this does not mean every participant in a given culture can be assumed to share its virtues and pathologies or that it is reasonable or moral to base one’s conduct towards such groups on these kinds of cultural generalizations.

If you walk through the fine university town of Göttingen, in Lower Saxony, you will come upon many memorials to the university’s Nobel prize winners. Eventually, however, you will notice that they dry up in the early 1930s. This is because they were overwhelmingly Jewish, and after the rise of the Third Reich their brethren were driven from the public life of Germany and of the university.

The Jewish people are clearly the most extraordinarily gifted and just the most extraordinary nation in human history, whose role in the destiny of not just the human race, but of the cosmos, is unparalleled and unique. God may not have chosen them because they were impressive in the time of Abraham or Moses, but they have come a long way since then. Does that mean they have no negative cultural characteristics? That would be surprising; the blessed angels are the only “people” with no negative cultural characteristics, and that is because the bad third decamped to the abyss of damnation and the rest were given the beatific vision.

Does that mean that we must support the existence of the State of Israel? As indicated earlier, this is a tricky question because it implicates the bitter grievances of another group with rival claims. Either side could give you very extended accounts of the soundness of their version of events. While it is hardly likely that the State of Israel was established without injustice being done to anyone, for what it’s worth I do not think any resolution that involved its extinction or the ‘right of return,’ which amounts to the same thing, would be desirable or just.

Has the Church been guilty of antisemitism in the past? No, for the Church is the spotless bride of Christ and guilty of nothing.

Christians on the other hand are miserable sinners, and whether defined as the unreasonable ascription of negative cultural characteristics to the Jewish people or outright “biological” racism, it is clear that this phenomenon has tainted much of Christian history.

But, as anyone who has had an argument with anyone, about anything they care about, will know, such disputes are always occasions of sin and are almost never pursued without the excessive engagement of the irascible appetite. If some neo-pagan psychopath were then to murder a vast multitude of one’s interlocutors, the examination of conscience such polemics always demand would become very painful indeed and its necessity manifest the urgency that usually only the saints perceive.

From the period known as late antiquity until the secularization of the nineteenth century, membership of western polities was defined by baptism and adherence to the true form of Christianity (variously defined). This was not unusual. Acceptance of the civic deities of the ancient polities and then of Rome was the key element of belonging in those societies before the triumph of the Cross. Islam demanded that only its adherents play a full role in the social and political life of the territories it conquered.

Liberalism adopts a posture of neutrality, but it is a false posture. By declaring religious questions interminable it simply demands that we make gods of our bellies. The Jewish people have a privileged right to emigrate to the land of Israel which they forfeit by baptism. This fact, and the frankly biblical basis of its territorial claims, make the State of Israel a constant irritant for post Christian secularists. So much is this the case that they are driven to make common cause with the overtly theocratic partisans of political Islam in the quest for its destruction.

Every people is defined by its vision of man and his destiny (CCC 2244). As Ruth said to Naomi, “Where you go I will go, and where you lodge I will lodge; your people shall be my people, and your God my God.” Our God is borrowed from the Jews and He insists that every man is our neighbor, not least His brothers and sisters in the flesh.

As Jacques Maritain who, with his Jewish wife, escaped death at the hands of the Nazis by mere coincidence in 1940, observed during the War:

…. it is the urge of a love infinitely stronger than the philanthropy commended by the philosophers which causes human devotion to surmount the closed borders of the natural social groups – family group and national group – and extend it to the entire human race, because this love is the life in us of the very love which has created being and because it truly makes of each human being our neighbor. Without breaking the links of flesh and blood, of self-interest, tradition and pride which are needed by the body politic, and without destroying the rigorous laws of existence and conservation of this body politic, such a love extended to all men transcends, and at the same time transforms from within, the very life of the group and tends to integrate all of humanity into a community of nations and peoples in which men will be reconciled. For the kingdom of God is not miserly, the communion which is its supernatural privilege is not jealously guarded; it wants to spread and refract this communion outside its own limits, in the imperfect shapes and in the universe of conflicts, malice and bitter toil which make up the temporal realm. That is the deepest principle of the democratic ideal, which is the secular name for the ideal of Christendom.

Maritain thought that if we all just accepted the implications of that love it would not be necessary to call it by its proper name. He was wrong, and we must once more be on our guard against the scourge we thought defeated forever in 1945.

Dr. Alan Fimister is an assistant professor at St. John Vianney Theological Seminary in Denver, Colorado. His most recent book, with Fr. Thomas Crean, O.P., is Integralism: A Manual of Political Philosophy.